The next day I went back with my pier gaff and more ghost shrimp, but (of course) got no striper bites. I did get one nice barred surfperch.

Date: September 22, 2000; To: PFIC Message Board; From: Mola Joe; Subject: Re: Hammerhead sharks off piers?

The biggest one that I know of was caught by Dennis Austin off Manhattan Beach Pier back in the early ’70s. I didn’t see the shark caught, but I did see a picture of it and if I remember right it was around 200 pounds. What made this fish even more unique was he caught it with an Alvey reel, which is a large single action reel that looks like a big fly reel. Back then they were popular with the surf fishing crowd because you can cast them a mile. As far as hammerheads that I have actually seen caught, I saw two taken off Hermosa Pier (I think it was the Summer of ’75 or ’76) with one of then I helped gaff. I hooked one that same summer, but on 30-lb test I never even slowed it down. Even when one does show up, most people on a pier are not equipped to catch them with their smaller tackle, and if they are hooked, they’re lost shortly after. 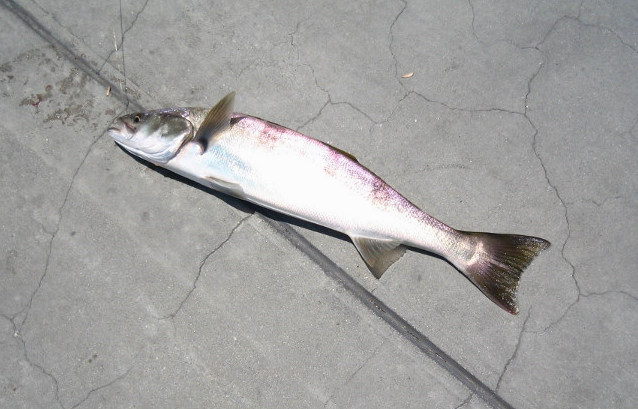 Small white seabass aka sea trout caught at the pier

Arrived at Manhattan around 7pm. A few anglers at the mid-pier are catching corbina using fresh mussels and sand crabs. I saw a local pier rat, who people call “Mike,” wrestling a very nice size corbina when I arrived. By the looks of it, it must have been over 15″ long and fat, very fat. At the end of the pier, a few guys have been fishing and one group has a medium size shovelnose shark on a stringer. I didn’t bring any bait since there are usually bait fish around but NADA. No bites whatsoever. Used the Sabiki till my arms were hurting and all I could reel in was a tiny herring and one salema, both released. Saw a couple of thornbacks caught and a baby blue shark (from what I was told). I begged a couple of squid from a fellow angler and tossed it afar to no avail. Left the pier around 9:30 cause the wind started to pick up and it was a little chilly to watch dead poles. Oh well, maybe next time.

A couple of friends and myself went out yesterday from 5:15pm to 1:00am. When we got there about ten minutes in a guy’s rod goes BENDO and he quickly gets it and sets the hook. The fish didn’t stop taking line and I got closer to investigate. I asked a fisherman what it was and he said it jumped out of the water, “didn’t you see it?” I told him “no,” and I asked him once again if he recognized it and he said it was a thresher. I was like “WHAT.” Back to the guy who was fighting the fish. The fish didn’t stop taking line and unfortunately he got spooled. The guy was stunned in what had happened and he checked his reel for any damages. Later that night the mackerel were in but periodically. My friend got three good bites but he failed to connect twice but on the third he was on but one of his swivels broke and he lost the fish. As for me I did manage to get some mackerel but that was it for the pier. Around 12:30 am we moved to the surf to see if we could get some grunion but we had no luck. We did fish the surf and I caught a shovelnose guitarfish, about a 3-footer. All fish were caught on mackerel and I believe the thresher was caught on a whole mackerel.

Went yesterday and saw the huge bait balls of dines, macks and smelt all over the pier. Everyone who knew how to catch bonito was able to catch all they wanted. Ended up catching too many bonito to count and I had caught them on live bait, 3.5 oz jig and on a bubble feather rig. Later that day fished for shark and I was skunked but had two good bites but my buddy caught two undersized sharks. Oh also on Sunday some guy caught a shark about 70 pounds which was said to be a soupfin. The shark took a massive chunk of bone. 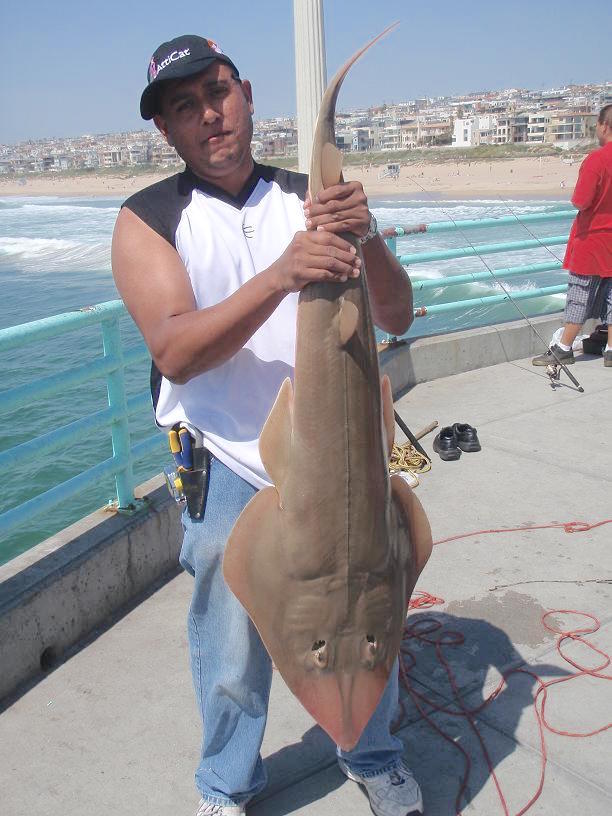 So, one of the regulars at the pier yells at me, and a number of other regulars, to come quick to the mid-area of the pier. He frantically yells out, “WHITE SEA BASS! WHITE SEA BASS! Get your dines ready!” As we took a closer look as to what he was yelling about, we find out that the white sea bass that he was talking about was…. a grip load of BONEFISH!!! Unfortunately, I only brought lures and a Sabiki so I couldn’t catch any. All were around a foot. Some actually looked a tad bigger. Tomorrow, I plan on venturing out there with mussels in hand… I do not, however, have access to any ghost shrimp… As for the action today, I caught a couple of bonito in the morning at around 7-8AM. Thereafter nothing much to report. [We never found out if these were actually bonefish; often mullet milling around under piers are confused with bonefish and sometimes with yellowtail]

Date: September 17, 2013; To: PFIC Message Board; From: halibut hunter; Subject: Thresher Shark and other large sharks in Manhattan Beach

I am surprised to see large sharks back at Manhattan Beach since all we’ve been catching are 4-5 footers this summer but I had an approx. 10-ft Thresher on my line for about 10 minutes this past Saturday Morning (7am) and just seeing this beautiful beast jump out of the water was a treat. Does anyone know any humane way to bring up a Shark that size without using a gaff and killing it. I tried to beach it but it absolutely went where it wanted and darted under the pier using a piling to snap my line. I’ve been using a jumbo lobster net all summer but now what to do that some big guys are coming along. Also a few hours earlier some fisherman had a (7-8 foot) what looked like a dogfish shark on his line (1am) but once again with no way to bring it up the line snapped as it thrashed. Any advice? I’d love to bring some of these guys up so I can snap a picture of them and quickly release them. Ton’s of Macro and Sardines at Manhattan Beach this whole past month (6am-8pm).

With some practice you should be able to get it into a big crab/lobster net. I’ve seen pros get monster sturgeon into ‘em. The big dog shark was probably a soupfin shark. 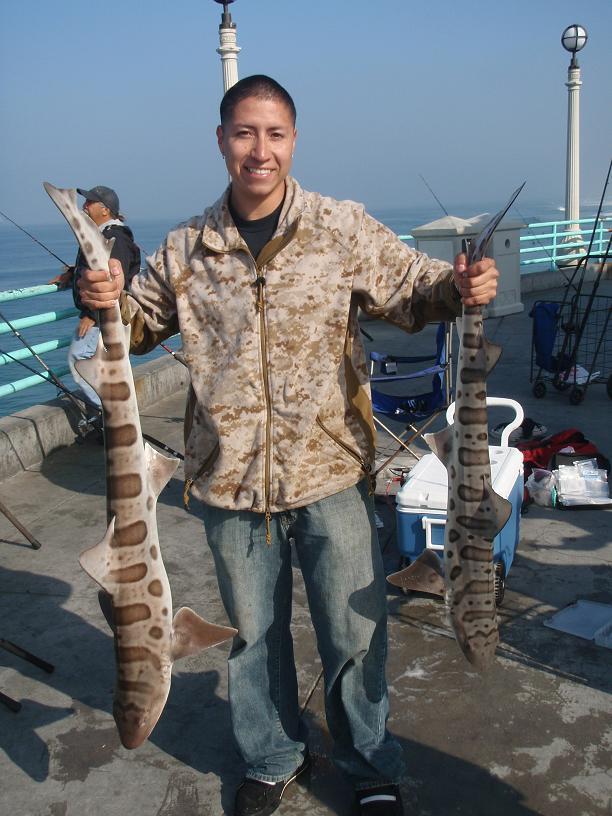 <*}}}}}}}}}>< —  I doubt if any city council in the state has ever shown more of an anti-fishing bias, especially anti-pier fishing bias, and less respect for both the Coastal Commission and the California Department of Fish & Wildlife, than the city council of Manhattan Beach. Nor has any city council seemed to flout state rules and regulations with such impunity. It happened after a white shark bit a swimmer at the pier in early 2015. The white shark was attached to a fishing line from an angler at the pier. The council seemed to have a collective fit of apoplexy and in their minds the blame for the incident was obvious‚ the fault must be due to the angler, an angler who must have been fishing for great white sharks. 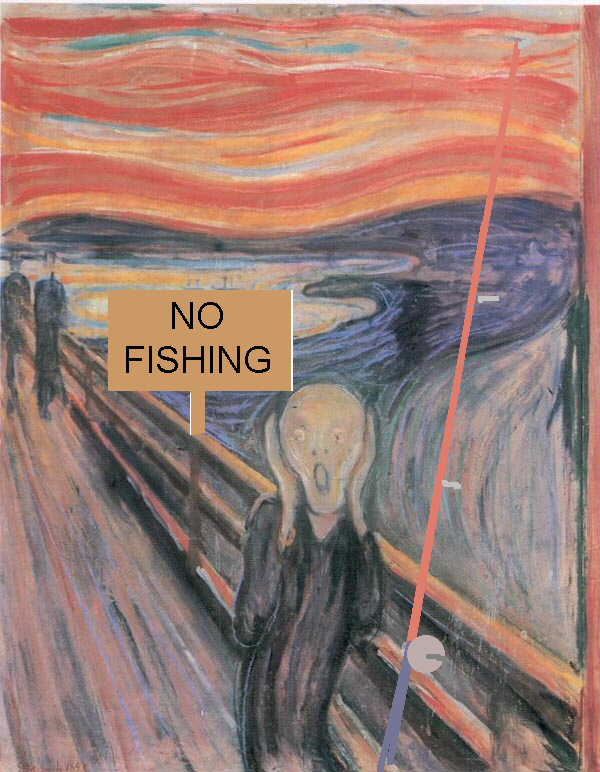 Soon after the council closed the pier even though told not to do so by the state. Soon after that they issued new fishing regulations that were not allowed by the state. Soon after that they removed the fish cleaning sink (their right) and instructed the police to enforce their illegal rules. The state said they would correct the problem but, to date, have done virtually nothing and the illegal regulations still persist. I’ve often thought pier anglers should just boycott Manhattan Beach but that would do nothing but please the rich elite who live in that town and who don’t particularly like the poor, minority  “pier rats” who like to use “their” pier. The elite prefer the pier to be simply a place to stroll or jog over the ocean in their designer “sweats.” Most seem to love the surfers who already feel they own the pier and most seem to detest the fishermen who dirty up the pier and kill the innocent fish.

I got involved in the battle as the leader of PFIC and UPSAC, both via the phone and in letters, while UPSAC Board Member Hashem Nahid attended the council meetings and gave testimony. We both even attended a summit that was supposed to iron out the differences and give room for improvement. My conclusion at the end of the summit, and following the lack of progress since that day, is that the  state’s answer to any problem — hold a meeting — was about as useful as most of such meetings: delay and very little solution. I could go on and on but this article would be far too long. However, a couple of posts to my kenjonesfishing.com blog do give additional information.

<*}}}}}}}}}>< — I shouldn’t have been surprised with the city’s attitudes, given that the human environment at the pier is frequently wrong when it comes to fish and fishing. Or should I just say misinformed? A visit one year took place on a hot Sunday afternoon in July, a day when a parking space was almost impossible to find, and sunbathers and onlookers seemed to cover most of the beach and pier. There I was, calmly reeling in fish out at the end of the pier, when I was approached by a bronzed young beauty (naturally a blond) in a spandex jogging outfit, one who definitely deserved to be in the movies (and yes, I guess I can be sexist at times). She watched for a few moments and then leaned over and asked what I was catching. “Mainly mackerel,” I replied. “Why do you fish?” she asked in her sweet valley voice. “Aren’t all of the fish out here polluted, don’t they cause cancer?” I then began to patiently explain about the types of fish and the differences between the resident species in Santa Monica Bay (which might contain toxins and be dangerous to eat), and those that migrate in and out of the bay (and are safe to eat). She seemed somewhat appeased until she was joined by a bronzed young man, apparently an escapee from one of the local muscle salons. She relayed to him some of what I had said, but he, in a dumb, bellicose manner, replied that there was no way he was going to eat any fish from these waters. Sticky wicket, end of debate and end of education.

About that time a deafening noise was heard, noise which I initially mistook for someone on the pier playing obnoxiously loud music. But no, it was a boat passing by (several hundred feet away) which had a huge “Save Our Bay” banner and a disc-jockey who, I am sure, was soon to lose his hearing. Between songs, he would ask the people on the beach for help in cleaning up the bay, an act which should be supported by all. What did upset me a little was the attitude of these young people who had bought the pollution headlines but failed to read the fine print. The only way we will save any bay or the ocean is to learn about the problems and work together to correct the causes. Facts and education are needed, not half-truths backed by the aerious science and scare tactics of some groups. But, that is probably asking too much.