The first date, the first kiss…the first visit to a new pier, all offer intrigue and hope for the future. And then reality sits in. Here my first visit offered a mixed message. The park itself was certainly nice, somewhat of an oasis in this industrial part of San Francisco, and the restoration efforts to bring the salt marsh back to a more natural state should prove interesting over time. And the water which fronts the pier was hopefully productive since it was supposed to be warmer than water further out in the bay. At the same time the channel of water that the pier sits in is fairly narrow and shallow—especially during  low tide periods like that when I first visited it.

But then the first cast and within five minutes a solid hit, hookup and nice-sized pileperch. Things might prove very interesting! An hour and a half later, still just one fish but nearly non-stop crab-grabs by small Dungeness crabs that apparently found the warm water to their liking. The only problem was that I was fishing, not crabbing, and the brown crabs were grabbing the bait before the fish had a chance to grab the bait. Dungeness crabs are illegal to keep in San Francisco Bay (five had made it up to the pier while hanging on to the bait), and all of the crabs were mere fledglings only a few inches across in their shell. Yes, fish were evidently present but my success had been limited. And, would the crabs prove a nuisance in later visits? Only time would tell but I now had a good reason to make several visits to the pier. 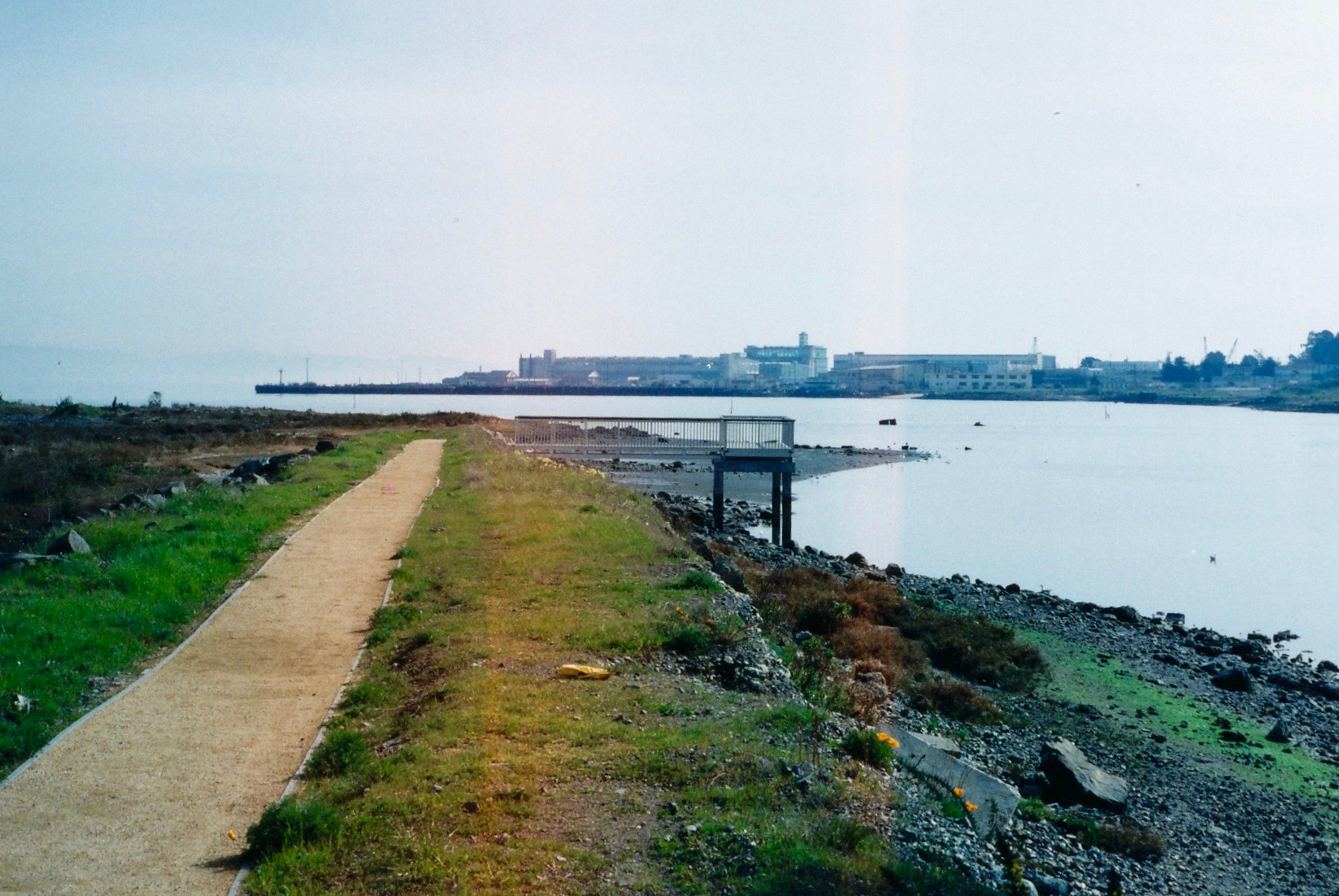 Environment. The small pier, metal and barely big enough for more than a half dozen anglers, sits in a channel next to the Hunters Point PG&E Power Plant. Out from the area sits the India Basin part of San Francisco Bay. The pier sits off by itself to the right of the main park area and, in fact, almost seems out of place in this park. But thankfully someone had a little foresight for recreational needs and a pier. Heron’s Head Park itself is part of what is called Pier 98 by the Port of San Francisco, a man-made peninsula that extends quite a way out into the bay (at one time it was planned to be part of another bridge across the bay). The area on the right side of the peninsula has developed into a salt marsh and it is primarily in that area that the grounds are fenced off and cannot be walked upon. Restoration of the salt marsh is a key goal of the park. Most of the left side of the peninsula is open and it is here, along with the main trail, that people walk, jog, stroll with their dogs, or simply come out to enjoy a bit of nature.

Perhaps the most notable feature of this site, at least for the fishermen, is its location adjacent to the power plant. The narrow channel of water that the pier sits in receives warm water from the nearby Hunter’s Point PG&E Power Plant outlet. It’s similar to what anglers used to find at the Warm Water Cove Pier and it should mean good fishing at times, just as did in the waters at that pier. The shoreline has a steep bank (to the right of the pier) and there is fairly fast moving water here so the water should prove productive for stripers and a number of other species including perch and jacksmelt. However, at low tide it is a fairly shallow and small inlet. Pilings have no mussels, as yet, but have some barnacle growth. To the left of the pier is a muddy shoreline, an area that looks like it should contain ghost shrimp (so bring your pump). The bottom of the channel is mud with some grass in the mid channel; it does not appear to have many rocks on the bottom

Fishing Tips. Due to the size of the pier and the channel it sits in, anglers are not really presented many options as far as to how or where they will fish. Cast out into the mid channel, or to the left or right of the pier, that’s it and it is all in the same small body of water. However, three main types of fish will be caught.

Although not a rocky area, there seem to be lots of perch in this area—perhaps due to the warm water. Winter and spring will present some pileperch, white seaperch, blackperch and occasional redtail surfperch and calico surfperch. Summertime will present walleye surfperch and silver surfperch. Mixed in will be a smattering of the rocky shore-type perch—rainbow seaperch, rubberlip seaperch and striped seaperch. For all of the bigger species use a high/low rigging with size 6 or 4 hooks and pile worms, ghost shrimp, pieces of market shrimp, or grass shrimp for bait. For the smaller walleyes and silvers use pieces of pile worms, cut anchovies, or small pieces of shrimp along with size 6 or 8 hooks. For all of these, fish on the bottom in the mid-channel area.

Schools of jacksmelt will also swing through the area. For these mid-water feeders use 2-3 small hooks together with small pieces of pile worms, shrimp or anchovies. Fish the baits under a float or bobber, three feet or so under the surface.

Flatfish such as sand sole, sanddab, starry flounder and halibut will also find this muddy area to their liking. For the first three a high/low leader or sliding sinker rigging on the bottom baited with pieces of anchovy, pile worms, grass shrimp, and pieces of ghost shrimp (or small ghost shrimp) should prove effective. The halibut will prefer a live bait and shinerperch should be available for bait during the summer months when the halibut are most common. Use a sliding sinker rigging with size 4-2 hooks for the halibut.

Although this area may or may not prove reliable for sharks, it should be a good area for bat rays. If seeking the big rays use squid for bait and make sure you have heavy enough equipment for the beasts—at least 20-30 pound test and a good rod and reel.

Finally, this should prove a good area for striped bass just as was the case at Warm Water Cove. Evening hours during a high tide should prove most productive and both bait and artificials can be used at this small pier. Primo bait will be anchovies, pile worms, bullheads (staghorn sculpin) and ghost shrimp. Artificials include Fish Traps, Rattle Traps, Pencil Poppers, Rapalas, and spoons like Kastmasters and Krocodiles.

<*}}}}}}}}}>< — One problem at this pier is the same as plagues several other Bay Area urban piers. The parking lot where you leave your car is a long ways from the pier — and out of sight. Given the steep rise in car break-ins in some areas (like this) your car is at risk. As for yourself, it should be a safe area during the day but I would not visit the pier at night (and it has a posted sun-up to sunset hours). Nearby areas have considerable gang activity and high crime rates; why tempt fate? Lastly, be careful if you have small children with you. The bank is steep and the water is swift and one small child already drowned in the fall of 2000 so keep the children away from the shoreline area.

Facilities: None, with the exception of a porta-potty near the entrance to the park.

Handicapped Facilities: None, although the pier itself would be fine for the handicapped; it is metal with railings 42 inches high. However, the path to the pier is fairly long (I’m estimating 1/8 of a mile), perhaps too long of a distance for many people in wheelchairs.

How To Get There: Third Street to the Islais Creek Bridge and then left (east) on Cargo Way to the end where it meets Jennings Way. The park is located on the other side of the parking lot. To get to the pier take the first trail off to the right of the main trail (near the entrance); it will wind around to the pier.