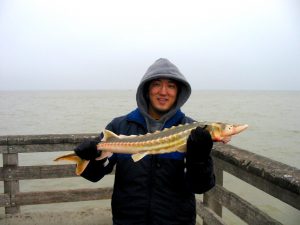 Green Sturgeon caught at the McNear Pier by Matty in 2005

Size:  To 108 inches in length and 350 pounds. Most green sturgeon caught from piers are small, less than 25 pounds; most caught in the ocean are under 10 pounds. Two 36-inch fish were caught off of the Belmont Shores Pier in Long Beach; one weighed 6.6 pounds, the other only 5.1 pounds.

Range: On the Pacific Coast, just south of Bahía San Quintín, southern Baja California, north to the Gulf of Alaska, across the Bearing Sea to the Kamchatka Peninsula, Russia, south to the Peter the Great Bay, Sea of Japan and Tohoku on Japan’s Honshu Island. Common from San Franciso to British Columbia.

Habitat: Anadromous, spending most of its adult life in salt water but ascending up fresh water streams in the winter to spawn. Most commonly found in bays and brackish water (part fresh water and part salt water). Their diet emulates that of white sturgeon with young greenies primarily feeding on insects, worms, amphipods, and other small invertebrates. Adults become more piscivorous, feeding on fish as well as bottom dwelling crustaceans and mollusks (crabs, shrimp, clams). Recorded to a depth of 361 feet. 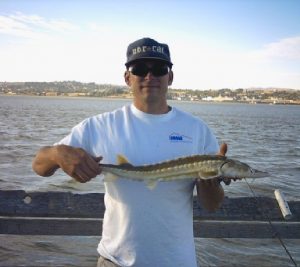 Shoreline: Sometimes taken by anglers in the San Francisco-Bay Delta although now illegal to keep.

Boats: A few are seen each year from boats in the San Francisco-Bay Delta waters but they no longer can be kept.

Bait and Tackle: None since they are now illegal to keep.

Food Value: None, since they no longer are legal to keep! In areas where still legal, they are generally considered inferior to white sturgeon as far as edibility. The meat is firm textured with no apparent flakes but is strong flavored and contains more red muscle than white sturgeon. The meat is high in fat content.

Comments: Perhaps endangered and currently illegal to keep in California. It’s amazing that we have let the number of sturgeon reach this crisis point but it’s been happening for the last couple of centuries.

“We tend to dismiss the sturgeon, if we think of it at all, as a primitive fish, and allow that to account for its rarity. In our collective memory we forget that as recently as 1890 the biomass of Atlantic and short-nosed sturgeons in Deleware Bay were in the neighborhood of 48 million pounds; that at the same time fishermen in Washington’s Columbia and Baker rivers were unable to use their gillnets in the spring because hordes of white sturgeon would have burst through them; that in Austria, on the Danube River, members of the Viennese royal court amused themselves by firing cannonballs into fleet-sized squadrons of migrating beluga sturgeons. But the sturgeon is geologic time made flesh, and the length of its tenure on earth is impossible to comprehend. The fossil record presents completely modern forms of sturgeon dating back to the Upper Cretaceous, 100 million years ago.” —Richard Adams Carey, The Philosopher Fish