Identification: The body is long and compressed. The dorsal fin is very long and continuous with many more spines than soft rays. The caudal fin is deeply forked (rounded in spotted kelpfish and striped kelpfish). Their coloring varies from light brown to green to purple depending on the habitat; typically those in kelp are usually kelp-colored, those in eelgrass bright green with brilliant silvery stripes. Apparently these fish can change colors rapidly, at least juvenile fish, with browns and greens seeming to be the preferred colors. Adult females also have the ability to change from red to brown to green, however, it takes them a little longer than the kids. Alas, the adult males seem to have forgotten how to perform this party-pleasing trick.

Habitat: Typically in intertidal, shallow-water areas near rocks or kelp. Recorded to a depth of 132 feet. 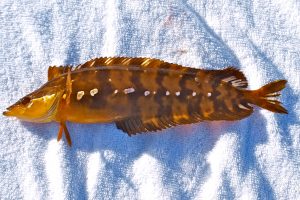 Bait and Tackle: Light to medium tackle and small, size 8 to 6 hooks. The best bet is to tie the hooks directly onto the line. Preferred baits appear to be small crabs, pieces of shrimp, live bloodworms or pile worms, and fresh mussels (although I have caught some on small pieces of abalone).

Food Value: Reported to be fair eating although with an unusual flavor. I’ve never tried them myself but would expect them to be good fried. The flesh assumes the external color of the fish.

Comments: Although generally considered uncommon north of Point Conception, I have caught a number of these pretty fish while fishing inshore at the Berkeley Pier. The fish were caught right in among the shoreline rocks and the usual bait was small pieces of pile worm. Two related species, striped kelpfish and crevice kelpfish are also common at Bay Area piers; both though have rounded tails and their coloring is different from giant kelpfish. 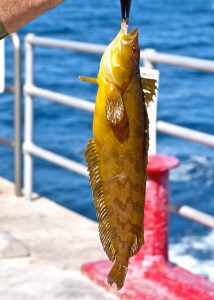 A giant kelpfish I caught one day from the Cabrillo Mole in Avalon.