The following article reflects the situation when it was open. 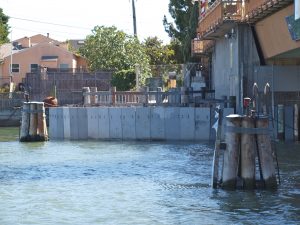 Looking from the Oakland pier across the water to the Alameda pier. 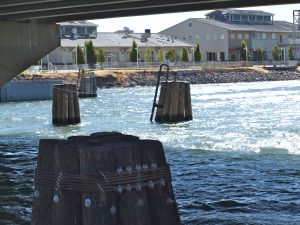 Environment. The Fruitvale Bridge spans the man-made ship channel that connects the Oakland Estuary with San Leandro Bay. The ship channel narrows in this area and one result is strong tidal flows, another is a slightly different scouring of the bottom on each side of the channel. The Alameda side saw a stronger flow and deeper water. The Oakland side is shallow with a more limited flow. Of note, this is where Sausal Creek flows into the estuary to the side of the bridge.

The primary fish here are perch in the winter and spring, stripers in the summer and fall, sharks and rays from the spring into the fall months, and jacksmelt almost all year round. A few starry flounder might show in the winter months and kingfish (white croaker) were always a possibility.

The Oakland pier always seemed better for perch, the Alameda pier better for striped bass, and stripers approaching 50 pounds in weight were landed there.

Fishing Tips. In the winter to early spring, several types of perch could be caught at either pier; these included pileperch, rubberlip seaperch, blackperch and white seaperch. For these, small hooks, size 8-4, and pile worms and grass shrimp, or small pieces of market shrimp, seemed best. If seeking the bigger perch, especially the rubberlip perch, bigger bait, including ghost shrimp, proved effective.

On the Alameda side, you could fish straight down in the water adjacent to the powerhouse; this somewhat protected water was often very productive. You could also try fishing in the shallower waters of the cove adjacent to the shoreline. The water near the shoreline saw a more mild current along with a few rocks that could attract perch. 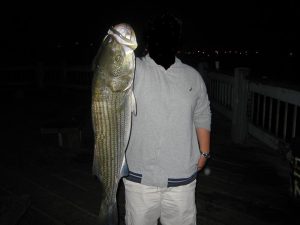 During the summer and fall there would be a few white croaker (kingfish), and quite a few sharks and rays. There were also a lot of small shiners, staghorn sculpins (bullheads) and gobies (longjaw and others). Unless trying to catch the latter fish for bait, larger hooks, size 2 and up, was advisable.

For the stripers, live bait often worked best. A Carolina-type rig baited with live shinerperch, small staghorn sculpin, mudsuckers (longjaw goby) or midshipman. For the stripers, the optimal time seemed to be July or August.

A lot of anglers also plugged for the striped bass. A variety of lures were used and they seem to change every year. One thing to note if plugging was to keep the plugs away from the bottom; there are a lot of rocks to hook on to lures, and sinkers for that matter. It was always wise to also bring a net to use with large stripers, sharks and rays. 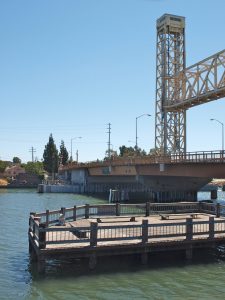 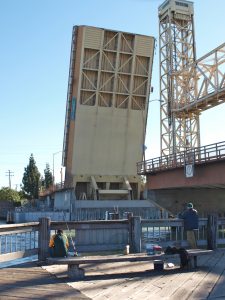 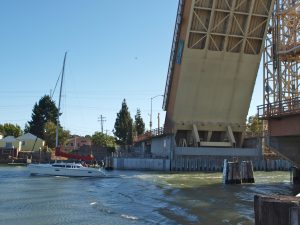 Unfortunately, the Oakland pier became somewhat of a homeless encampment with constant trash and garbage, excrement and urine (there are no port-a-potties), and, at times, abusive behavior directed to the fellow homeless as well as toward anglers and children trying to fish from the pier. That may be why it’s now closed. In addition, safety from local gangs has also become an issue of concern. If fishing at night it was always wise to do so in a group.

Enclosed are pictures taken last Saturday. On the opposite side of the water is the Fruitvale Bridge Pier in Alameda, a pier that is currently closed. This is considered excellent striper water and the one gentleman fishing said he comes out most weeks after work and casts for stripers.

Posted by: ChrisF: Don’t fish there unless you wanna get mugged.

Posted by: Ken Jones: If you fish at night I would recommend being in a group. During the day it should be OK, in fact I fished there last Saturday for three hours. Only problem was keeping the shiners off the hooks.

Posted by red fish: Uh, Chris, the only reason I don’t fish it is because I couldn’t figure out the tides and the size swimbait to use in the current there. There are some big bass in there and the Veteran’s Court Pier at the right time of year (winter/spring). All I have been able to catch is baitfish there and a few pile perch that hang on the Alameda side.

Posted by ChrisF: It’s better at nighttime. But don’t go there unless your packing or your with a crew. Lots of shady people and thugs hang out there

Posted by Ken Jones: On my visit last Saturday I did encounter one guy with a few loose marbles. He came striding out to the end of the pier carrying what looked like a large floor mat and proceeded to fling it out into the water while mumbling to himself. He then proceeded to come over and ask the inevitable, “hey bro could you spare some change. I have money in the bank but can’t get to it today.” I gave him the thirty five cents in my pocket; figured he needed it worse than me.

Another guy in an A’s shirt was having an animated conversation with a Bluetooth and was apparently unhappy at someone. But I approached him with some fishing questions, gave him a large jacksmelt that I caught, and proceeded to have a nice talk with him.

The third guy that showed up was a local tossing swimbaits for bass. Said he did it weekly when he got off work.

There also were a couple of homeless guys that looked like their lodging was in a carved out section of the bank adjacent to the pier. I remember one guy stopping by and asking if they were doing OK.

So yes, it’s definitely an urban pier and you need to be aware of what’s going on around you. But, I also had a nice visit and enjoyed it even if action was slow.

<*}}}}}}}}}>< — Fish surveys done by the Department of Fish and Wildlife show blackperch and jacksmelt being the two main fish caught from the Oakland pier. Other perch species included pileperch, white seaperch, striped seaperch, shinerperch and a surprisingly high number of sharpnose seaperch (a perch uncommon to San Francisco Bay); not sure if the person identifying the sharpnose perch was correct with the identification. Other expected species include striped bass and bat ray.

<*}}}}}}}}}>< — The Bay Area has always been known as a diverse area — and that includes the waters and bottom of San Francisco Bay. Here the writer is discussing species from the Mediterranean, Asia, North Atlantic and the Indian Ocean. The importation of alien species into the bay, and the affect they have had to the native species, has been the concern of many groups. In several cases, aggressive foreign species have thrived while the number of native species has decreased. The general consensus is that most of these species, including fish species, have come into the bay from the ballast waters of overseas ships. Efforts have been made to solve the problem, to stop (by a variety of methods) these foreign species from entering San Francisco Bay. Similar efforts take place at most other bays/ports that see large-scale shipping from overseas—i.e., Puget Sound, Los Angeles Harbor and San Diego Bay. However, for the most part there is little that can be done to impact the species that are already here.

Beneath the fishing pier at Fruitvale Bridge, Oakland

The mud surface is covered with the Bay Mussel, consisting of a Mediterranean species Mytilus galloprovincialis, a native species Mytilus trossulus, or hybrids of the two. Also common in this mix is the Green Bagmussel, Musculista senhousia, from Asia, the Orange-striped Anemone, Diadumene lineata, from Asia, and clumps of the yellow Crust-of-bread Sponge, Halichondria bowerbanki, from the North Atlantic. The pilings are covered mainly with white acorn barnacles—primarily the native species Balanus glandula, but also including the North Atlantic species Amphibalanus improvisus and the Indian Ocean species Amphibalanus amphitrite—black Bay Mussels, and a yellow band near the waterline consisting of Crust-of-bread Sponges.

<*}}}}}}}}}>< — An interesting article on the area (once called Jingletown) and estuary captures, I think, a good picture of what has taken and continues to take place in Oakland.

Hours: The Oakland Pier was open 24 hours a day but now appears to be history. The pier on the Alameda said has been closed for many years.

Facilities: Few! There was limited free parking on the streets near each pier. There were benches but no restrooms, fish cleaning stations, bait and tackle shops, or food facilities.

Handicapped Facilities: None, although the surface was wood planking and the railings were approximately 40 inches high.

How To Get There: Take I880 to the Fruitvale Avenue then go west to the bridge. The entrance to the Oakland Pier is on Alameda Avenue.