Species: Gymnothorax mordax (Ayres, 1859); from the Greek words gymno and thorax (naked breast or lack of scales) and the Latin word mordax (prone to bite).

Identification: Typical eel-like shape with a large head tapering to a pointed tail; the only shallow-water eel lacking pectoral fins. They have very well developed teeth (to grab their prey) and the coloring is greenish-brown, greenish-yellow, or red-brown.

Size: Up to five feet long and around 15 pounds. Most caught from piers are less than three feet long. A 49-inch moray with an empty stomach weighed 11.2 pounds while a 47-inch fish, whose stomach contained two flying fish, weighed 14.58 pounds. It sounds like flying fish should stay at the top of the water where they can fly and not head down to the realm of the moray. 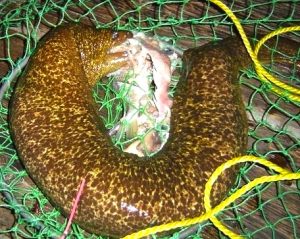 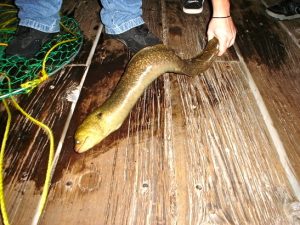 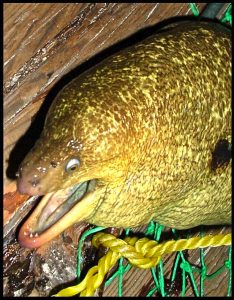 Habitat: Considered a true bottom fish that lives in continuous contact with the substrate; morays occupy crevices in shallow reef or rocky areas, especially around the offshore islands. Although ferocious looking, they are actually reported to be timid fish with poor eyesight but a very good sense of smell (their lower jaw is covered with taste bud-like structures used for sensing food). Moray tend to stay in their cave or crevice during the day and emerge at night where they use this excellent sense of smell to ambush prey. Primary foods are small fish and crustaceans. Studies at Catalina during a five-year term saw small kelp bass as the main prey (showing up in 64% of the diet). The second and third most frequently consumed items were red rock shrimp and two-spotted octopus, with more difficult prey such as kelp crabs and spiny lobster being infrequently consumed. Other small fish recorded included juvenile garibaldi and blacksmith. Unfortunately for the moray, the ink from an octopus can prevent the moray’s sense of smell from functioning for up to two hours. Reported to live to nearly 30 years.

Piers: Every year will see a few California moray caught by southern California pier fisherman; an event that attracts the attention of most nearby anglers. Morays are both uncommon and ferocious in nature—it is one fish that should be handled very carefully. Best bets: Ocean Beach Pier, Dana Point Harbor Pier, Redondo Sportfishing Pier, Hermosa Beach Pier, Gaviota Pier and, by far the best, the Green Pleasure Pier and Cabrillo Mole, both at Avalon on Catalina Island. 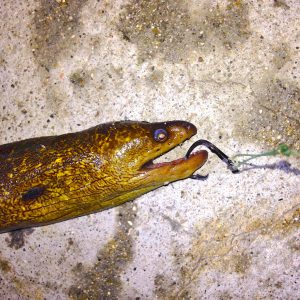 Moray caught at the Cabrillo Mole in Avalon by Rita

Shoreline: An occasional catch by rock anglers in southern California.

Boats: An unusual catch on boats although I did manage one from a boat once while fishing the Coronado Islands.

Bait and Tackle: Morays are seldom the intentional catch of anglers; instead they are caught incidentally when fishing for other rocky-shore fish. They will grab almost any bait. However, best bait would appear to be small live fish followed by live crabs or shrimp. The best time to fish is at night and the angler should keep the bait in motion since moray will hide in crevices waiting for prey to swim by. Tackle should be kept simple; a medium-sized outfit with at least 15-pound test line and a size 4 to 2 hook. Be prepared to strike and start reeling quickly before the moray can retreat to the rocks.

Comments:  Moray are a favorite of skin-divers, often are quite tame, and tropical varieties make great aquarium pets. However, those on the end of a fishing line are neither tame or of a mindset to be pets. Those I have caught (I’ve only caught two myself), are usually ready to do battle. They twist and turn their body and make it almost impossible to get a good grip on them. Plus there are those teeth, two sets of teeth. They have a set of sharp teeth in their mouth that are designed to grip their prey. A second set of teeth are found on their pharyngeal jaws (housed in their throat) that spring into action dragging the prey further down into the throat. This second set of teeth, recurved, sharp and backward pointing like a bird’s talons are unique among fish and only similar to snakes (or the creature in Alien). Scientists think this adaption by the moray and snakes is due to their long, slender bodies but it’s not found in other eel and eel-like species. Whatever the cause, it’s effective. Then there is the bacteria that covers those teeth, bacteria that can quickly cause infection. Just a couple things to consider if you happen to inherit the unenviable job of removing a hook from a still-thrashing, nasty-tempered moray that’s giving you the evil eye!

By the way, although moray are common at Catalina, it doesn’t mean you are going to catch one. I have caught over 125 different species of fish from California piers and though I had once caught a moray while fishing from a boat at the Coronado Islands, I had never caught one from a pier. Thus I decided around 2010 that I needed to catch a moray from a pier and I felt the Cabrillo Mole would be the place to catch it. Years went by and even though there was an annual visit to Catalina, and several friends caught moray, I never could seem to catch one. That changed on a warm July night in 2015 while fishing on the Mole with friends (which meant a bad Turkish-rendition of the song “That’s Amore” by my fishing buddy Mahigeer (and obviously no relation to Dean Martin). 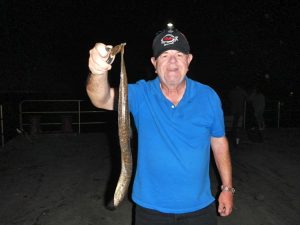 Soon after, I caught my moray another friend caught one fifty feet away on the Mole, and then, as we were leaving the Mole, we discovered a group of kids had just caught another moray. Whatever the reason for their abundance that night it will long be remembered as the “Night of the Moray.”