Species: Umbrina roncador (Jordan & Gilbert, 1882); from the Greek word umbra (shade, referring to its darkened, shady sides) and the Spanish word roncador (a snorer, or to snore). It is, afterall, a croaker. 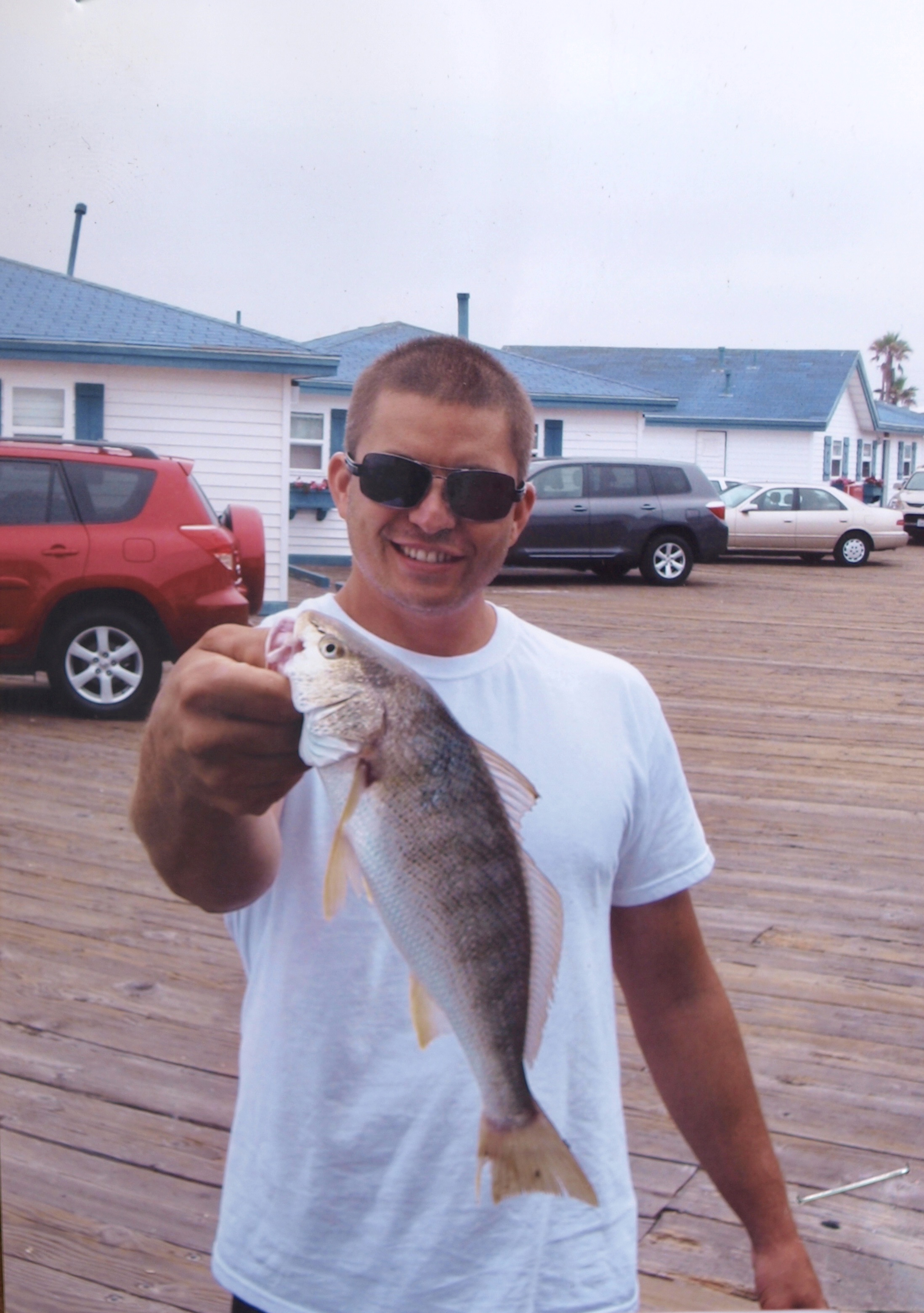 Identification: Elongated, croaker-like body with a blunt, rounded snout and small subterminal mouth. Yellowfins have a large, fleshy barbel at the tip of the lower jaw that separates it from other croakers with the exception of corbina. Their coloring is a blue to grayish-tan on the back with brassy and golden reflections; silver overlaid with dark yellow-brown wavy lines on the sides and bright yellow or golden fins. The coloring blends in and renders them almost invisible against a sandy background.

I almost undoubtedly caught a fish larger than that record fish without knowing it. It was caught on November 3, 2012 while fishing from a small dock in Cat Harbor (near Two Harbors on Catalina Island). It was one of many, many fish. All were returned to the water excepting the two largest yellowfin and a sargo. We were staying in a nearby camp where I cleaned and fillted the fish before putting them in Ziplock bags for the cooler. But, since it was such a good-sized yellowfin, I decided to measure it before cleaning. It was just short of 19 inches long, 18 7/8-inches to be exact. I knew it was a nice fish for the species but did not realize how nice until a couple of weeks later. While entering some fish data into my records, I noticed that the maximum size listed at the time for yellowfin croaker was 18 inches and about 4 pounds. That length was shorter than the fish I had caught. Given that I had not weighed the fish I’ll never know if my fish was larger than the record but its length leaves a nagging question mark in my head.

Habitat:  Generally found from the surf down to a depth of about sixty feet but most common in shallow-water, sandy areas, both oceanfront and in bays; recorded to a depth of 150 feet. At piers they are usually found from in or just past the breaking waves out to about the first third of most piers. Often found in medium to large schools so they tend to be aggressive feeders; if you catch one you will usually catch several. They tend to spawn in the summer, often mid-July to August, and sometimes just after spawing can see phenominal fishing (a fish or two every cast). 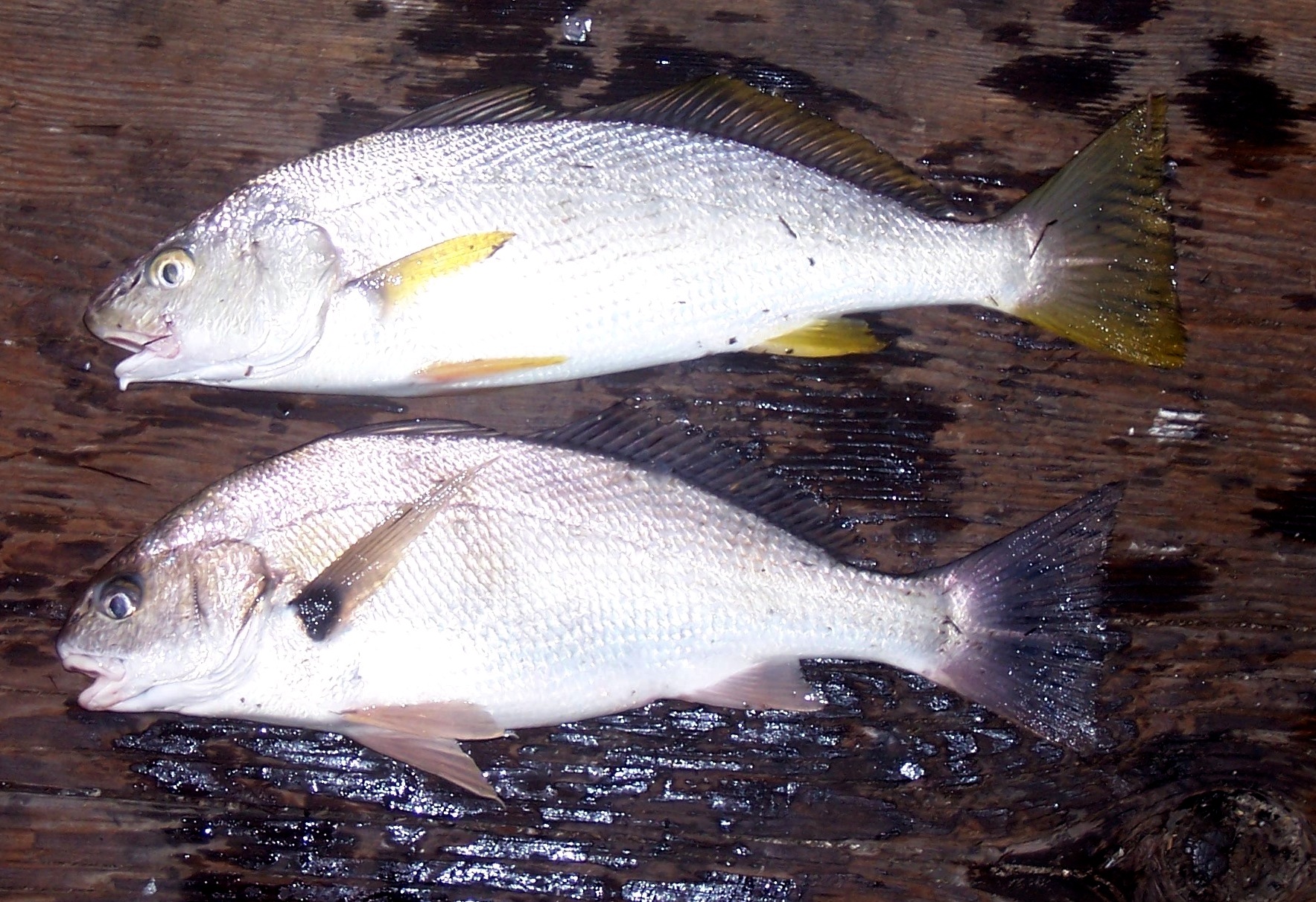 Shoreline: One of the main catches by sandy shore anglers in southern California.

Boats: A mainly inshore species although a few are taken by boaters fishing SoCal bays.

Bait and Tackle: Use light to medium tackle; high/low surf leaders with number 6 or 4 hooks, and be prepared for a quick, strong strike. Preferred bait includes fresh mussels, ghost shrimp, bloodworms and lugworms. Sand crabs can work well in surf areas while clams and innkeeper worms work well when fishing in bays. Yellowfin are a croaker that will sometimes hit artificial lures, generally shiny lures like small Kastmasters or Krocodiles. 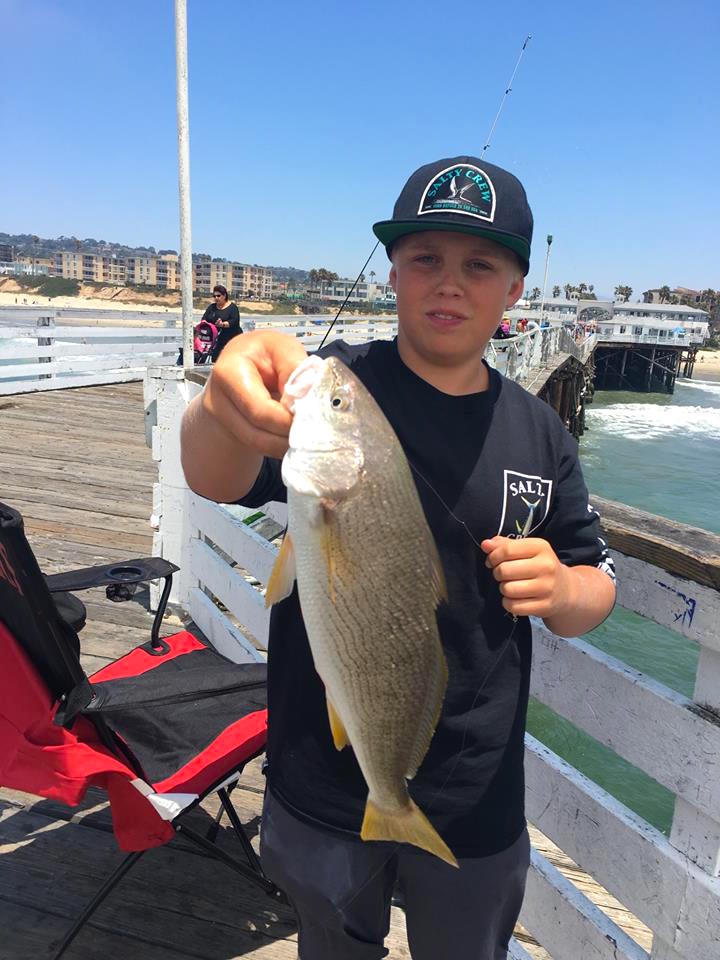 Food Value: In the past this was considered a good, mild-flavored fish. They have small flakes, a soft texture, and low fat content. Today there are warnings in many areas against eating croaker. They are a bottom feeder and in polluted areas tend to accumulate toxins in their body (because of the bottom creatures they eat). If you do eat them, it is best to bake or broil them in such a manner that the fats in the flesh will drop away from the meat. They have been illegal to take in California with nets since 1909, or to buy or sell since 1915. 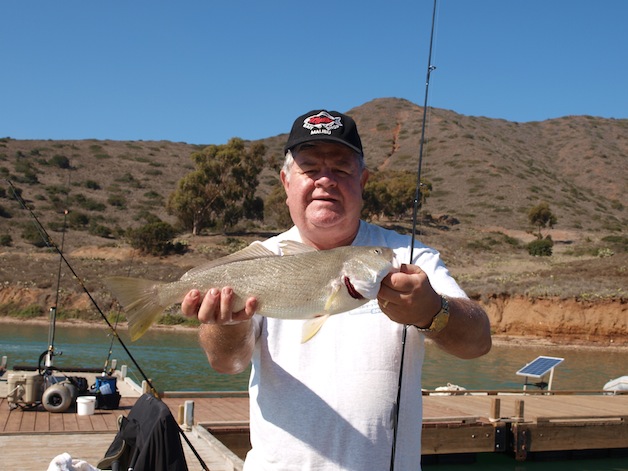 Comments: Yellowfin croaker are attractive fish that reach a decent size and put up a scrappy battle. By far, the best time to catch yellowfin croaker is around sundown and the early hours of the night. Of note is a study conducted on surf species by the Fish and Game Department between 2007-2009 in the Bolsa Chica to Hermosa Beach area. The study showed an increase in the number of yellowfin croaker from the 1990s and stated the yellowfin croaker were “much more abundant in the current study than in the 1950s.”