A different type of eel was seen in January of 2010 following a stormy, rainy night at Belmont. PFIC regular Riplee781 reported catching a “weird looking eel fish” that he couldn’t identify. His fishing buddy Jellyfish posted that “it didn’t have a face like a eel. It had a face like a white croaker and the skin was like a white croaker, scaly and sliver in color.” It sounded like a cusk-eel to me and after posting a picture of a basketweave cusk-eel to the site, they confirmed that it was the fish that had been caught. A still unidentified eel was a 4-foot-long specimen reported to the PFIC board in September 2008, a fish taken on anchovies near the surf line. 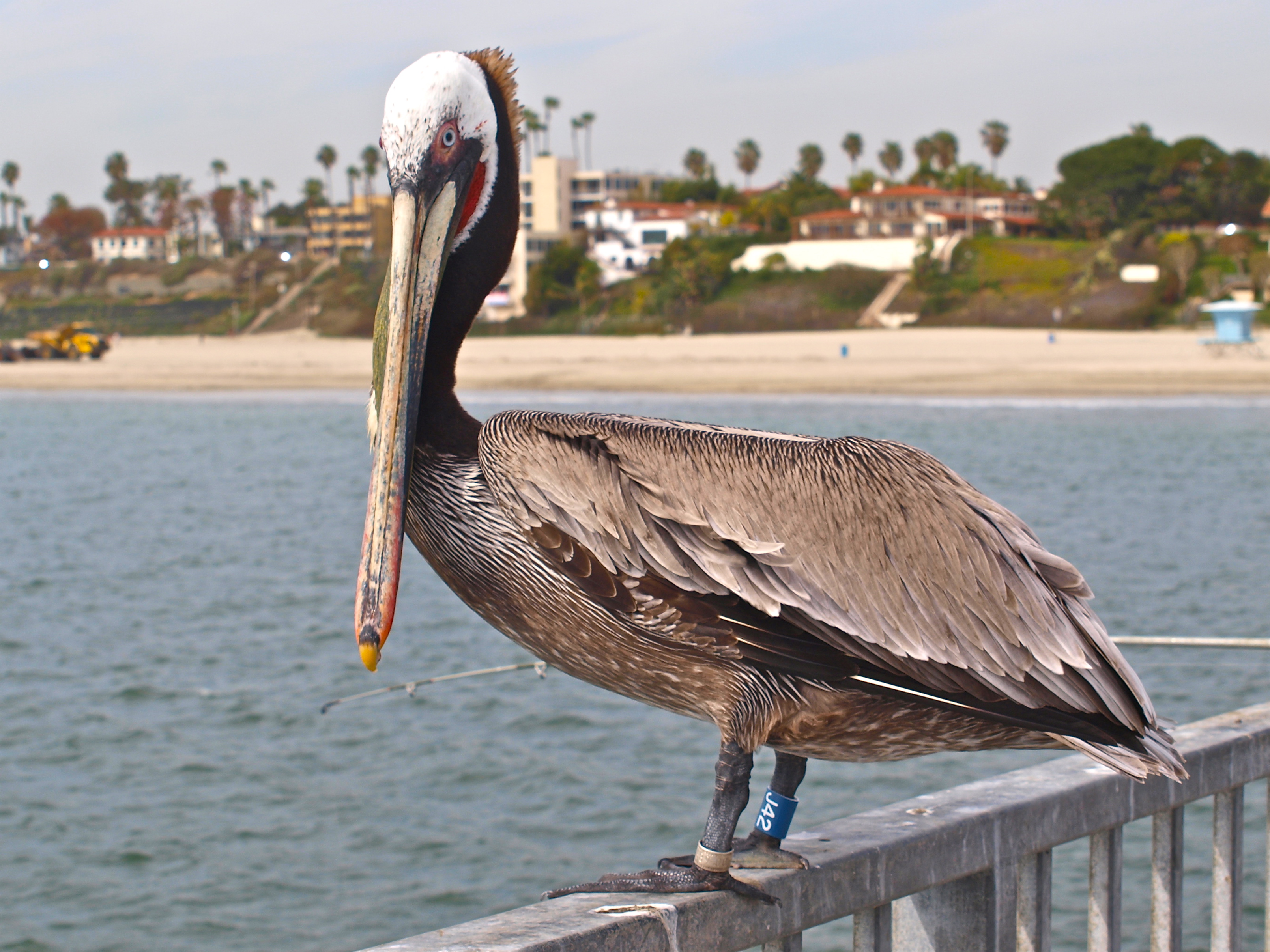 Sturgeon in Long Beach? Although far from being the largest of their species, two far-from-home green sturgeon were taken at the pier many years ago. As reported by Fitch and Lavenberg in 1971, one sturgeon was 36 inches long and weighed 6.5 pounds while the other was 35 inches long and weighed 5.25 pounds. Since green sturgeon can reach at least 350 pounds in weight, these must have been mere juveniles out exploring the world.

On May 29, 1958 a Pacific thread herring (Opisthomema libertate) was caught from the pier and since no one seemed to know what it was the F&G was called in for identification. A green jack (Caranx caballus) was recorded on November 24, 1957 from Belmont Shore but it isn’t noted if the fish was caught on the pier itself. The ’57 and ’58 catches were during a time of El Niño conditions. Two bonefish were taken early summer 1963.

El Niño undoubtedly also played a part in the catches of unusual fish just a decade ago. A number of threadfin shad (Dorosoma petenense) were landed in October 1997. These fish are common to Central America but considered rare in our ocean waters (although they have been reported from the Long Beach Harbor in the past). In addition, deepbody thread herring (Opistlzonemu libertute) were also reported and examined during the same fall month. 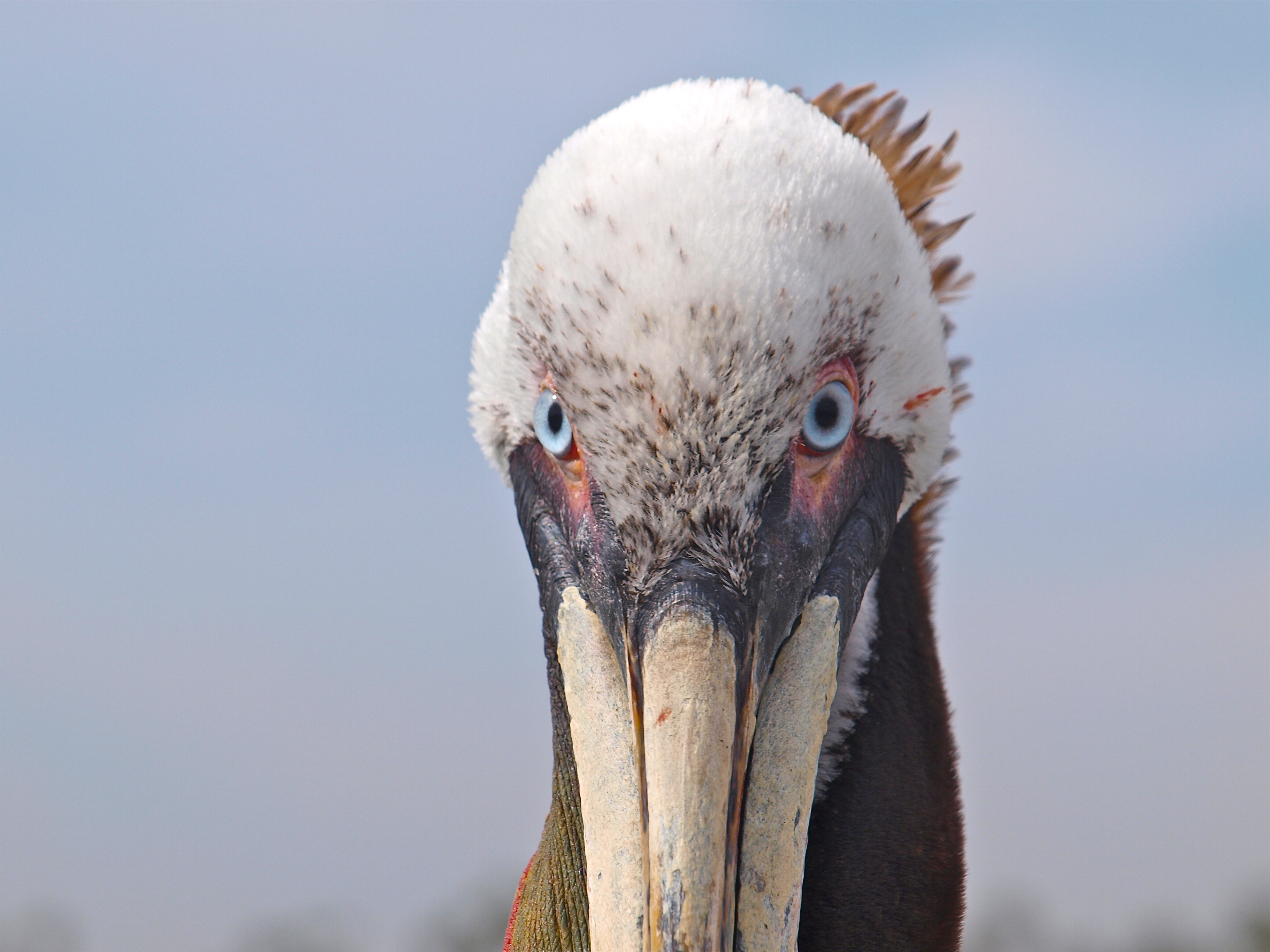 A species reported by marine biologist Milton Love is the normally-found-in-freshwater tilipia. He reported that several have been taken from the pier; they apparently are able to live for some time in high salinity waters including saltwater.

In addition to these pier-caught fish are a number of fish that that were taken in the surf near the pier. One of the rarest was a Pacific bigscale pomfret (Taractichthys steindachneri), one of only a handful recorded from the eastern Pacific. As reported by Fitch and Lavenberg in 1968, the fish “was caught barehanded on March 17, 1964, in the surf near the Belmont Shore pier by a Long Beach fisherman, Kevin Desmond. This fish was 678 mm TL, and weighed about 5.5 kg (12 lbs).”

Going even further back in the record books, the first escolar (Lepidocybium flavobrunneum) from California was picked up on shore at Long Beach in the spring of 1928. This fish, 734 mm TL, was recorded by Myers in 1932 as Xenogramma carinatum, and apparently represented only the fifth or sixth known specimen from anywhere in the world at the time. The second specimen from California was 610 mm TL and weighed 1835 g. It was picked up in the surf near Marineland of the Pacific’s pier on August 1, 1960 (California Fish and Game, April 1978).

An oddity, although not a rare species, was a fish captured by hand in March of 1998. It seems a Belmont Pier angler spotted a fish that had beached itself on the sand while chasing a school of grunion into the shallow waters. The angler raced down to the beach and grabbed the fish. Turned out to be a 7-pound skipjack tuna (Euthynnus pelamis)! What the normally offshore fish was doing in these inshore waters is anyone’s guess.

Lastly was the strange fish reported by Vernona Fath (Snookie), our Balboa reporter. The fish was one of the mainstays of California pier fishermen, but one with a freaky, oddball twist. In response to a PFIC Message Board thread concerning halibut that were brown on both sides, or white on both sides, she reported: “Yes, I have seen some of these halibut with unusual color patterns. Some have been solid. Others have been patchy. In 1955 there was an albino halibut caught off Belmont Pier. It was almost completely white with the exception of black fins, a black tail and black eyes. Fish apparently don’t have pink eyes as in other albinism cases. This fish was 13 3/4 inches long and weighed less than a pound. It was a healthy specimen. It was also the first halibut with albinism to be caught and seen.” So yes, this pier does yield some unusual critters. 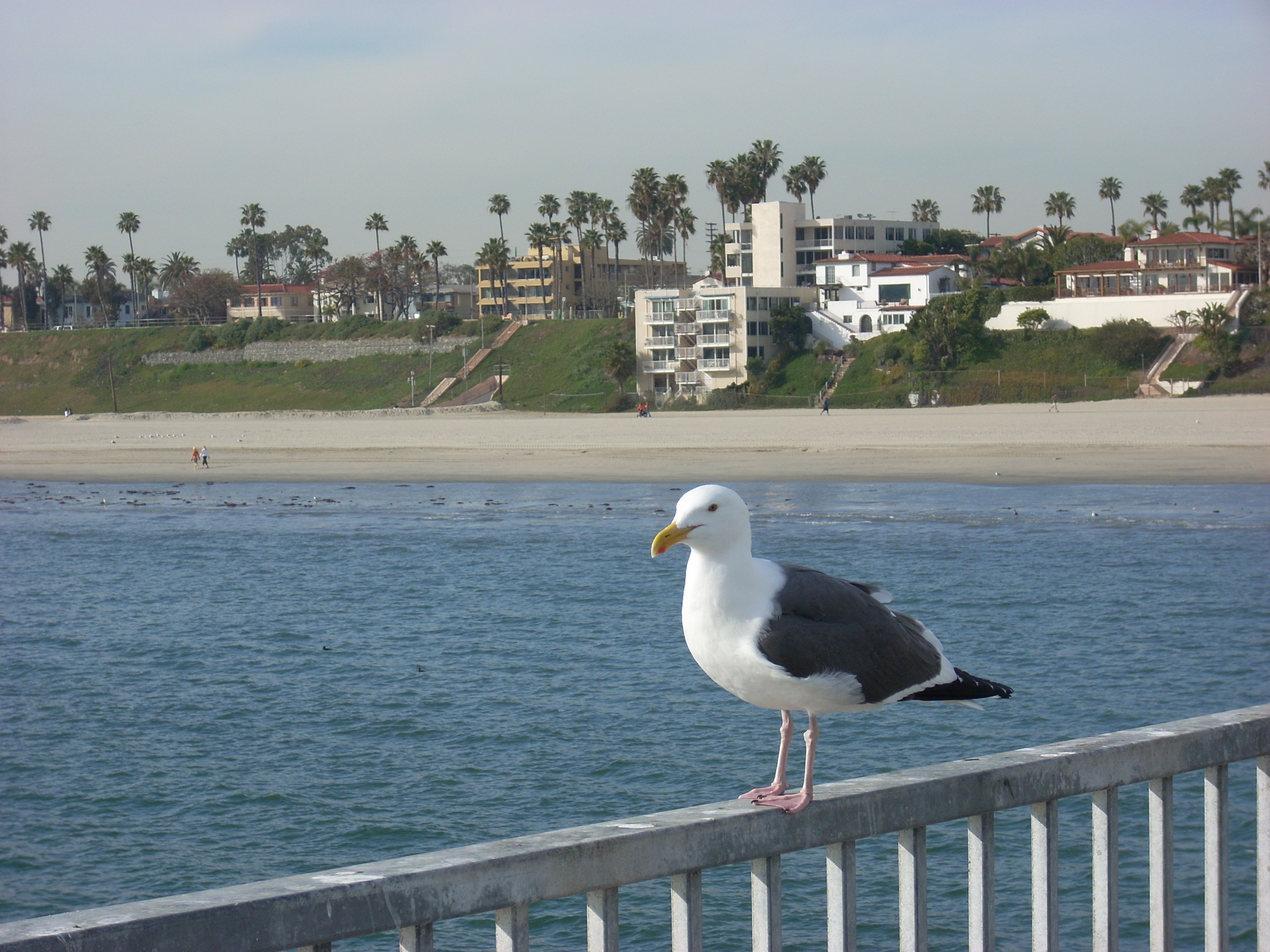 A final fish was the catch of a catalufa in 1975 (see story below).

Casting a bait and then sitting down and watching the rod tip on Belmont Pier isn’t the most glamorous and exotic fishing along the Pacific Coast, but it’s restful and sometimes productive for perch, an occasional halibut and other species. Then too, you meet interesting people.

Gerald Osier of 221 Grand Ave., who has worked on the pier and still does some parttime work there in the summer months, likes to fish the pier and just loaf. Just recently he caught one of the rarest fishes in the Pacific Ocean. It was small, and there was no way that he could have filleted it and got a dinner for two. So he reported to the department of Fish and Game, and one of the DFG biologists came to take a look and carry the fish back to the laboratories at 350 Golden Shore. The fish was red, looked like a perch, had large blue eyes almost the size of nickels, weighed 11 ounces, and was 9 ½ inches long.

Now Osier has a letter from John Fitch, research director of the State Fisheries Laboratories at Long Beach DFG, saying that the fish is a catalufa, extremely rare. In fact, said Fitch, fewer than 15 had ever been caught either by hook and line or in commercial nets in all the time that he has been with the DFG.

Fitch, in his letter to Osier, said that the largest catalufa that he had ever seen was 13 inches long and weighed two pounds. He also told Osier that the fish was being sent to the Natural History Museum in Los Angeles. It will be made into a mount and displayed.

This is just one sample of what can happen in pier fishing, which can be fun for individuals or a family except for the fact that all piers now are afflicted with vandalism. What public facilities are not endangered the same way? Belmont Pier is the one remaining public fishing facility in Long Beach and it deserves enough security protection to keep it clean.

Frank Hale’s Seal Beach Pier is another facility that is so close to Long Beach that it really gets more trade from this city than from Orange County. One of the reasons is that Hale has a barge— the only barge in this area— anchored in an area that is virtually in the San Gabriel River channel, where bonito and mackerel like to swim and hunt food. 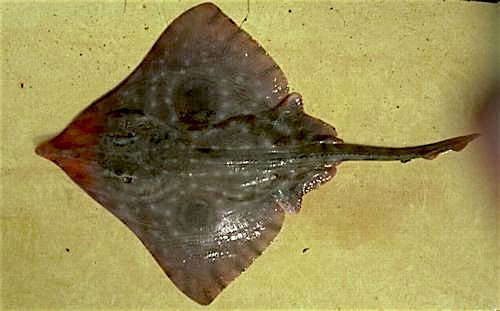 A not so big big skate

<*}}}}}}}}}>< — An interesting story comes from George Van Zant, a writer for Saltwater Sportsman Magazine who calls himself “Piscatorial Prevaricator II.” He has a web site called George’s Corner and one tidbit caught my eye: “Most of my elementary school years [’40s?] was spent on Belmont Pier where I raised money catching herring for the halibut fishermen. 5 cents each was the charge unless I swam the bait out, then it was 25 cents. I learned to swim in the Colorado Lagoon and more importantly I learned to catch smelt with a bent pin. I used them to catch 100 pound “rat-tail” sting rays off the lagoon floats.” Sounds like catching herring (queenfish) and smelt for live bait has been a standard technique for quite some time.

<*}}}}}}}}}>< — The pier played the part of another pier (the Balboa Pier) in episode 13 of the television series The O.C. Usually the Redondo Beach Pier played that part but it’s speculated that Belmont’s shape was preferred for a scene where two of the characters—Sandy and Rebecca—scattered the ashes of Max. It sounds just a tad complicated to me and I never even knew Max.

<*}}}}}}}}}>< — The barge Annie B was accessible from the Belmont Pier for many years. It was where I spent one so-so night in 1988 with a group of marine biology students from Anderson Valley High School. We had traveled down the 500+ miles from Boonville in vans and planned to spend the entire night on the barge in part to save the cost of a motel. 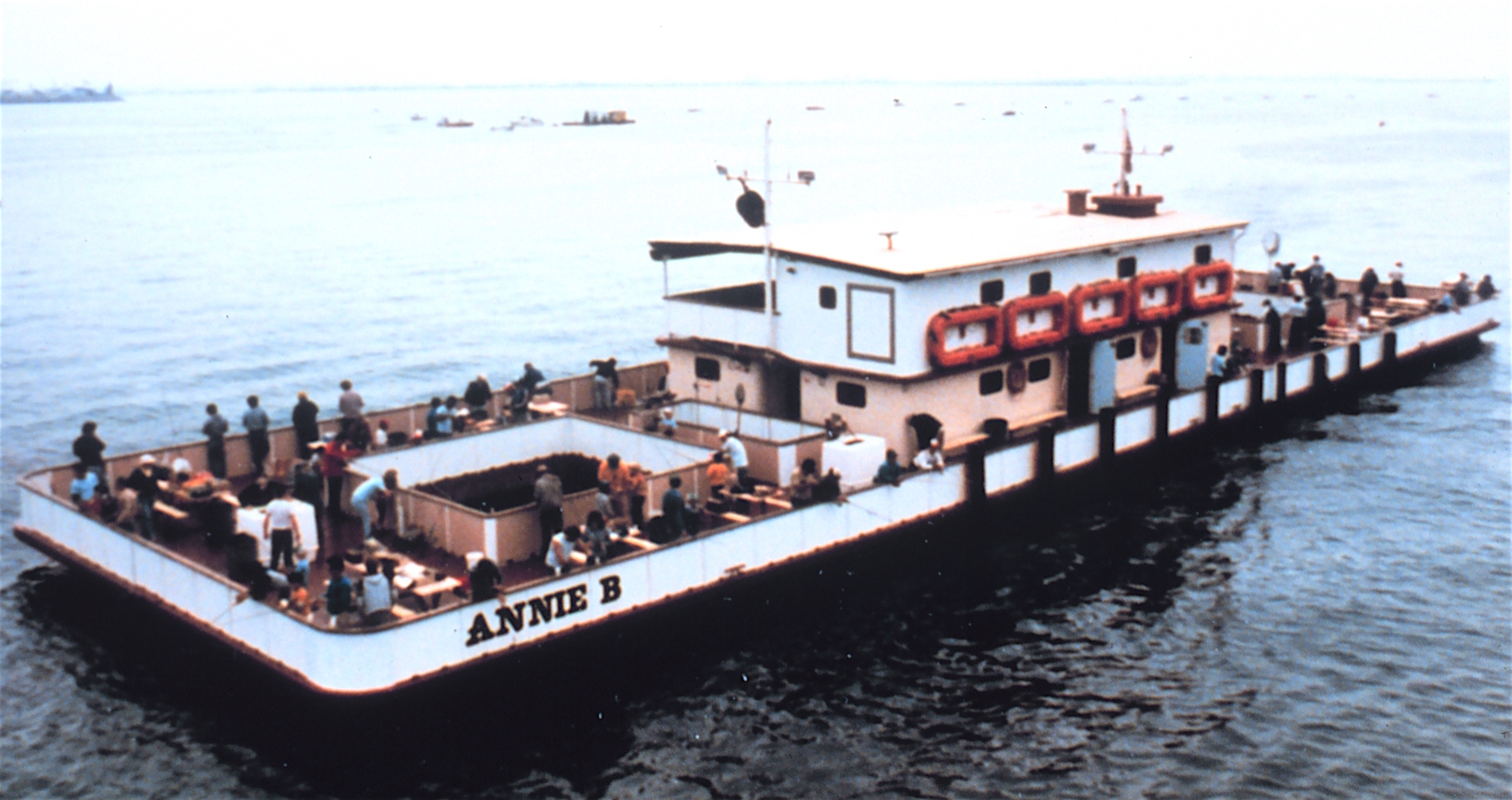 Unfortunately, the catch was mostly queenfish and white croakers with a few mackerel mixed in for variety. Not exactly big game and I grew tired of answering the question—“Mr. Jones, when are we gong to catch some big fish?” Luckily most of the students were asleep by 3 AM while I continued to fish. It probably wasn’t the smartest decision since I had to drive a van to San Diego the next morning.

In San Diego we made sure to stay at the Crystal Pier where we were able to do some fishing in between back-of-the aquarium tours at Sea World and the Birch Aquarium at Scripps. We did seek out the bigger fish (yellowtail) on the Mascot VI out of H&M Sportfishing but unfortunately most of the students were seasick for much of the trip. Once again, that’s why it’s called fishing not catching.

Thursday wasn’t exactly a good day to have lunch with the Belmont Pier Marlin Club, but it was the best offer I had. I mean 1 don’t want to be a prophet of gloom and doom and I’m not going to mention that nasty word that ends in “cession,” but don’t you think luncheon invitations are getting scarcer?

It was a bad day for the Belmont Pier Marlin Club because the wind was blowing, which is bad for fishing, but, anyway, I made my way to the pier and found Pop Shoat, the club’s executive vice president, leaning over the railing and gazing placidly at the spot where his line slanted into the blue water.

“Hiya, son.” he said, waggling his white beard-stubble in greeting. He unwrapped a piece of newspaper from around a package of sandwiches. “Have a sandwich. That’s your column they’re wrapped in.” “Gee, thanks.” I said, overwhelmed by this expression of esteem. “I read Hollingworth. too,” he explained, “but I save him to wrap the fish I catch.”

“It’s fresher material.” I agreed. There is not an ounce of professional jealousy in me. “Do they pay Hollingworth, or is that just a hobby?” “Dr. Honk Hollingworth.” 1 said, “is on the payroll as director of our department of vicarious physical education.”

A three-wheel electric auto came dashing down the pier blandly ignoring the sign that said, “No motor vehicles beyond this point.” There were more vehicles beyond that point than on the legal side of it. Some Long Beach electric auto salesman has been making a killing by telling his customers they are driven by rubber bands, maybe.

“What I wanted to talk to you about,” Pop said as he rebaited his hook, “is getting the city to put up a flagpole on the pier for the Marlin Club. Stand back while I cast.” He gracefully snapped an overhand cast that carried his hook far out from the pier and watched his sinker splash into the water. I watched the sign that said. “No overhead casting.”