Identification: A very deep-bodied croaker that is recognized by the black edge on the upper opercle (gill cover) and the dark black-purple coloration. They usually have a pale bar at midbody. However, adults seem able to change color patterns dependent upon the environment. In open water, over sandy bottoms, they may be somewhat tan in color while over rippled sand they can assume a striped pattern. Large adults, black in color, move into dark caves, crevices and grottos where they can be almost invisible. Juveniles may be yellow-white with several black horizontal bands on the upper portion of the body (and closely resemble juvenile sargo and salema). They have a blunt snout and the upper jaw projects over the lower jaw.

Habitat: Young like shallow-water areas with sandy bottoms, and are found along the open coast and in bays; adults are found in both sandy and rocky areas. Recorded down to a depth of 328 feet but generally found in waters from 10 to 50 feet deep. Feeds primarily on rock dwelling crabs such as lumpy crabs, young masking crabs (spider crabs), and red-rock shrimp. 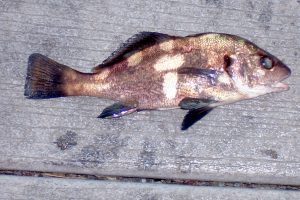 Piers: Black croaker are found at most southern California piers but are rarely caught; they are very shy and hide in caves and crevices most of the day. By the time they come out at night to move around and feed, there are less anglers around to catch them. Best bets: Embarcadero Marina Park Pier, Shelter Island Pier, Oceanside Harbor Pier, San Clemente Pier, Seal Beach Pier, Belmont Veterans Memorial Pier, Hermosa Beach Pier, and the Santa Monica Pier.

Shoreline: An infrequent catch by shore anglers in southern California.

Boats: A few are taken by boaters fishing the southern California bays.

Bait and Tackle: Similar to most other croakers; use a high/low leader with number 6 to 4 hooks. Bait with sand crabs, clams, fresh mussels, ghost shrimp, shrimp, bloodworms, or innkeeper worms. The best area for black croakers is from the surf area to midway out on a pier.

Food Value: Similar to yellowfin croaker in taste and texture: mild-flavored with small flakes, a soft texture, and low fat content. Eat only a limited amount in areas that are known to be polluted—and check for warning signs.

Comments: Black croaker are the least commonly caught croaker. It is reported that young black croaker, along with sargo and salema, lead extremely boring lives. All will school together just beyond the surf line in areas where there are rocks to provide protection against the surge of the surf. All will face directly into the surge and the schools will not shift position more than 10 feet during an entire season. However, within the schools, the size and numbers fluctuate from day to day. As the black croaker grow larger, they break away from the schools and begin to frequent caves and crevices (from boring to bleak). Illegal to buy or sell in California since 1933.