By the way, shortly after meeting Shari and dubbing her the “pier mom,” she gave my card to a local reporter who soon called and then did a story on the pier—and Shari. Unfortunately she’s now gone and I haven’t been able to find out what happened to her.

Fishing Season Brings Anglers Of All Ages To The Pier

Shari Rose calls out “any minute now!” when the mackerel swoop by the Coronado pier. And sure enough, the poles start bending and the silver, big-eyed mackerel are hoisted one after another out of the water, delighting the 25 or so anglers every evening. The fishing flurry is soon over. But wait about an hour, and “any minute now,” they’ll hit once again.

It’s fishing season on Coronado and anyone with a fishing pole, some squid, and a little time can catch a few. While mackerel are caught all year, they run best in the summer and have been thrilling anglers with big catches for the last two weeks…

Rose has been fishing off the Coronado pier almost every afternoon for nearly three years. In five days, Rose figures she caught 56 fish and has seen hundreds more reeled in by thrilled children, tourists, and pier regulars.

Part coach, part cheerleader, part game warden, Rose helps and encourages anyone who wants to catch a fish. She offers tips, cuts bait, unhooks fish, and measures any bass or halibut caught to make sure they’re legal keepers (22 inches for halibut, 12 inches for bass). “It’s wonderful to watch the kids. When they pull one in, it’s more fun for me than anything else,” says Rose.

Fishing on roller blades, teenager Luis Cruz caught 10 mackerel in two hours the day before. He comes on the weekends with his family to picnic at Tidelands Park and roller blades to the pier…

Ken Jones, author of Pier Fishing in California, rates the San Diego Bay as one of the best fishing spots in Southern California. The bay generally yields larger mackerel than the ocean piers in Imperial Beach and Ocean Beach. “Though it’s not big, Coronado is an excellent fishing pier,” according to Jones…

To Eat or Not Eat? While many of the fishermen on the pier say they don’t eat what they catch, most of the fish caught in the bay pose no serious health risks, according to the San Diego County Environmental Health department.

Only people who eat the fish daily over a long period of time could have problems with toxins. Pregnant women, breast feeding women, and small children especially should eat any fish in moderation. Jones offers some pointers:

Jones adds that “its always best to catch and release fish, since fish populations are so low. Enjoy the fresh air, and get closer to nature. That’s how I like to fish,” says Jones. 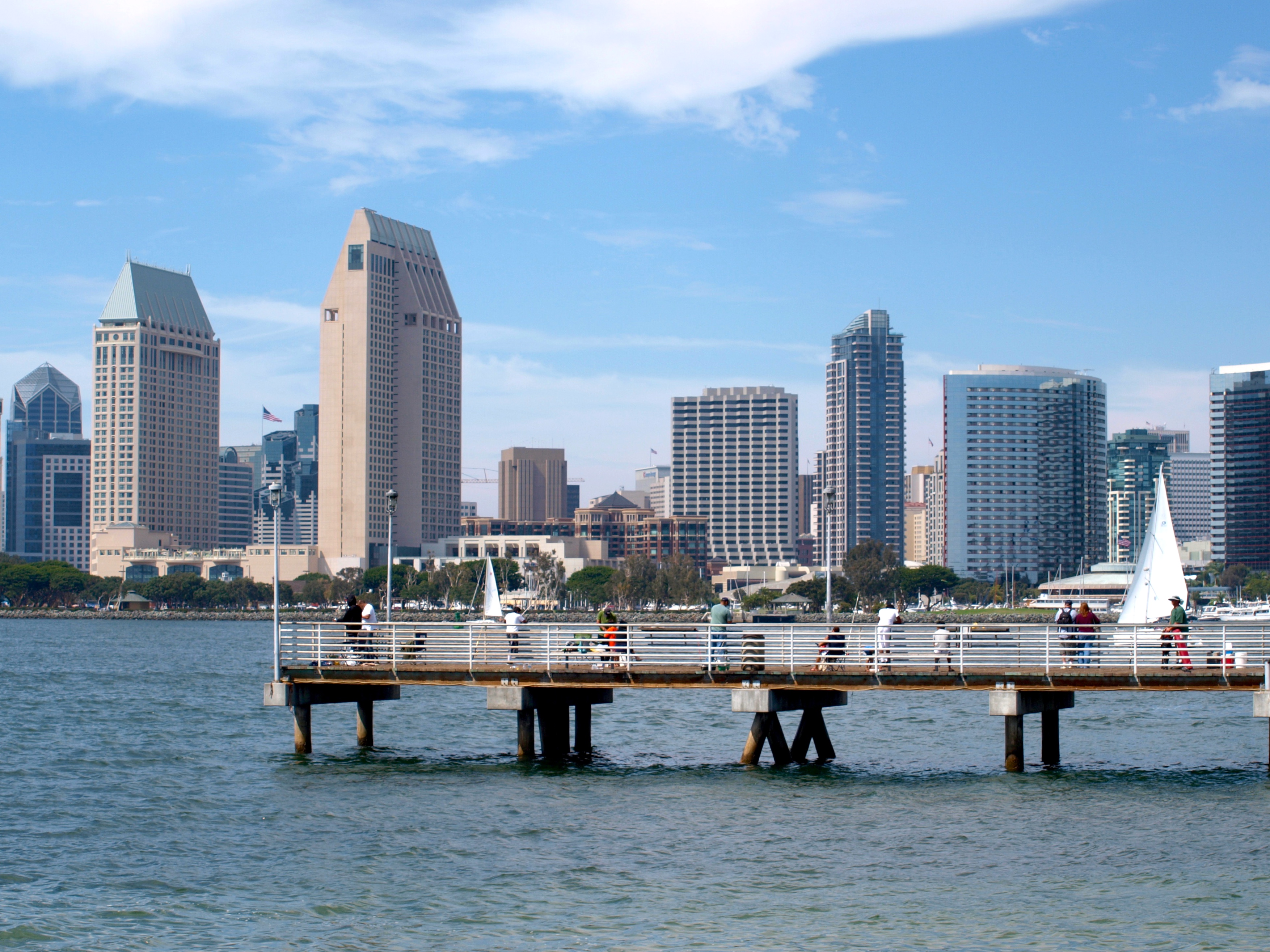 “Crawfish-tramping” these days is a lost art. Crawfish were easily obtained by removing your shoes and tramping the mud for a space three or four feet in diameter, bringing them to the surface of the mud and thereby easily providing bait for two or three to fish all day. There were no tin cans or glass in the mud in those days. You would select a place in the mud where the crawfish blowholes abounded; the finest place was on the Coronado of the Bay, from the Coronado Ferry down to Spanish Bight, a long mud-flat beach. We could go over on the ferry and back for a dime, and get more crawfish in half an hour than at the foot of Broadway in two hours. Crawfish-tramping was probably learned from the large fish—large skate, shovel-nose sharks, stingrays, halibut and other flat fish—they would select a spot where there were crawfish and they would flip up and down and bring the crawfish up. At the really low tide you could frequently see the marks where they flipped. Young boys tramped for crawfish, and carried them in little cans covered with wet seaweed, to sell as bait. Crawfish were the best bait for large-mouth, grab-at-whole-bait kind…

History Note. Beginning in 1886 Coronado was connected by ferry to San Diego, a short boat ride that eliminated the need for the long journey across the “Strand” to Imperial Beach and the drive back up to San Diego. 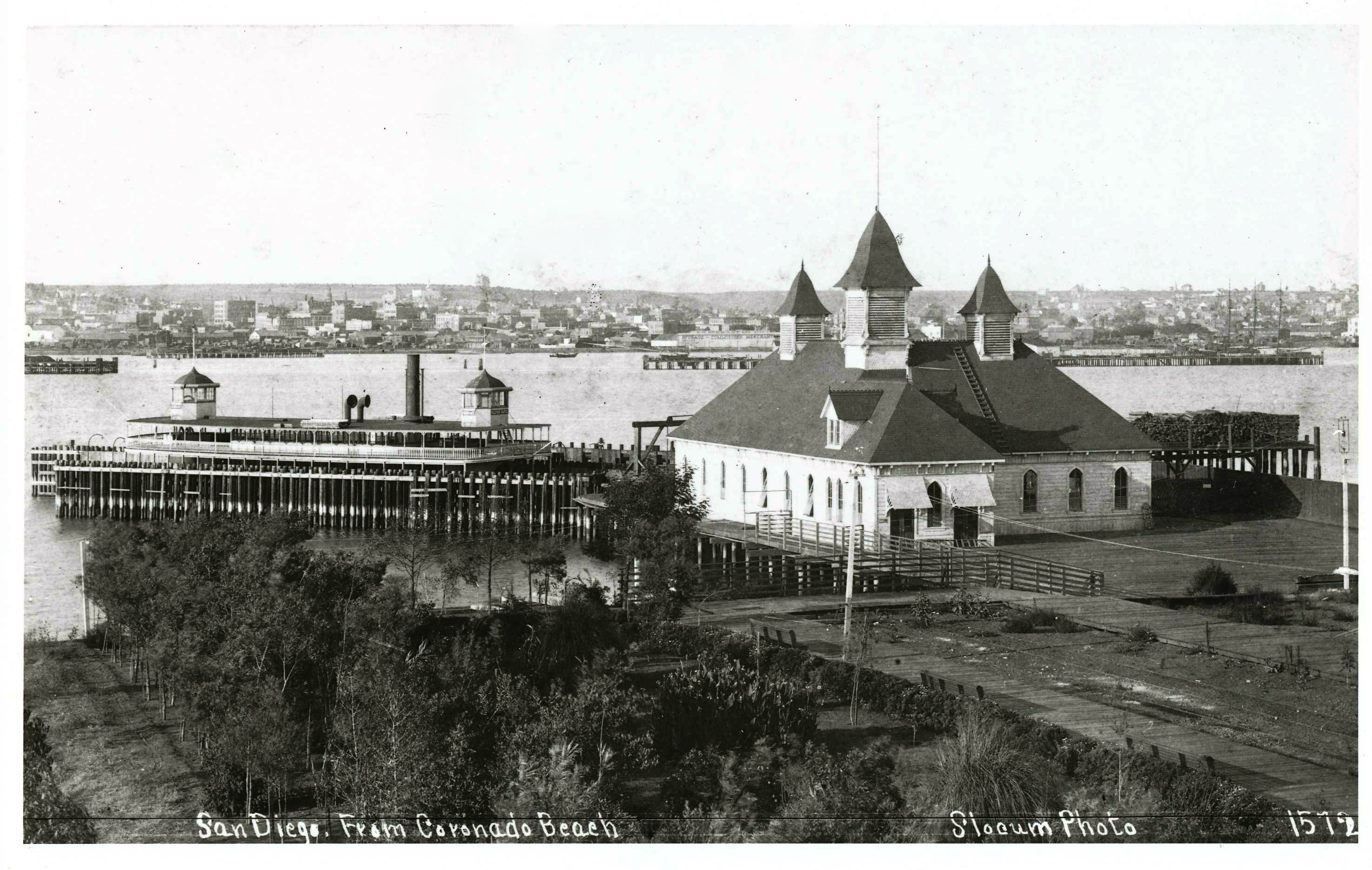 It was a no brainer but eventually someone had an even “better” idea—a bridge from San Diego to Coronado. When the Coronado Bridge was completed in 1969 it seemed to mark the end to ferry service in the bay. The old landing’s location at Orange Avenue (several blocks away from today’s ferry landing) became part of Centennial Park and though a ticket booth from the old ferry system was installed as a remembrance of the earlier times, the ferry service seemed to be just one more affectionate reminder of the area’s past.

However, less than 12 years later, in late 1981, the Coronado City Council and the San Diego Unified Port District began to study a possible return of ferry service to Coronado. In 1984 the Port Commission asked for proposals from interested firms and accepted designs for a future project (both for a ferry system and a restaurant/shopping area).

In 1985, the Star and Crescent Boat Company, the company that had operated the ferry service from 1925 to 1969, together with Southwest Marine, Inc., a shipyard operator, was ready with a proposal.

An important aspect of the overall project was the return of ferry service (to be run by the Crescent Boat Co.). The company argued that when the ferry service was shut down in 1969 it was done to avoid competition with the new Coronado Bridge and to allow the bonds for the construction costs of the bridge to be be recouped. However, the bonds, scheduled to be retired in 2003, were actually going to be retired by June/July 1986. (In fact, the bonds would actually be paid off on April Fools Day 1986). The company proposed a resumption of hourly ferry service between San Diego and Coronado.

In January 1986, the matter appeared before the Port District, which had been involved from the earliest discussions. The district was asked to grant a conceptual approval to revive the ferry as well as make a commitment to build a $600,000 ferry landing pier. The district put a 90-day delay on the proposal in order to study the issues.

Ninety days later, in April, the port commissioners agreed on the overall concept and agreed to spend $563,000 to $627,000 on a pier. The amounts varied depending on whether or not a fishing pier was included in the design. There were several remaining questions. Several commissioners were not happy about the plans for a landing float 40 by 68 feet in size. In addition, they expressed concern that the pier had to be longer and extend into deeper water to avoid nearby eel grass beds. And, they worried — would ferry passengers be endangered by the anglers if they jointly shared a ramp off the ferry as planned?

Things moved quickly and on June 20, 1986, the ferry boat Monterey made an inaugural trip from San Diego to Coronado. The ferry carried 200 people who would help launch a $6.5 million commercial-retail project (made possible, in large part, by the promised ferry service). Plans at “The Old Ferry Landing” included a 10,000 square-foot Victorian lighthouse restaurant, 30,000 square feet of specialty shops, boat slips—and a fishing pier.

By February 1987 the Public Utilities Commission had approved the ferryboat rides and the Star and Crescent Company announced the project itself would be open by June/July. The Port District cautioned that the ferry pier might not be done until August or September.

Then, in March, the Port District approved a $559,140 contract for construction of the pier. The L-shaped pier would be sectioned, one for recreational fishing and another for pedestrians and bicyclists boarding or leaving the ferry. The 20-foot-wide pier would include lighting, safety railing, fire protection, and an attached floating dock for berthing ferryboats.

In April 1987, new problems arose in a dispute between the Port District and the California Coastal Commission. The Commission said the master plan did not include docking on the San Diego side of the bay; the Port District said it did. The disagreement threatened to add four to five months for review and public hearings and push the opening date past July 1. Eventually, on May 7, the dispute was settled. But then a new dispute arose with the Port District and the developer over parking and how many fast-food shops would be permitted at the Old Ferry Landing complex. Eventually that issue also would be settled (but not in time for a July opening of the restaurant and shops).

As for the pier and the ferryboats? They both would be ready on July 1. The initial ferryboat would be the 58 ½-foot Silvergate but more were to be added. Sunrise on July 1, 1987 saw a test run followed by a VIP trip at 9 a.m. at which time the ribbon cutting ceremony took place. The first public trip was scheduled at 10 a.m. and by the end of the day more than 3,000 passengers had traveled the one-mile trip between San Diego and Coronado.

When the complex and pier first opened the center was called the “Old Ferry Landing” to give it historical appeal (although it was not actually on the location of the old ferry landing). Then, when the shopping center began to host a Farmers Market, the name was changed to the “Ferry Landing Marketplace.” Eventually that name too was changed, to today’s “Coronado Ferry Landing.” As for the pier itself, it is the lone public “fishing pier” in Coronado and receives heavy use.

Handicapped Facilities: Handicapped parking spaces and restrooms are located in the shopping complex. The pier surface is wood and the railing is about 40 inches high.

How To Get There: From San Diego, take the Coronado Bay Bridge (Highway 75) to Coronado. Once over the bridge you are on Third Street. Simply follow it to B Avenue, turn right, and follow it to the front of The Old Ferry Landing – the intersection of First Street and B Avenue. The pier sits behind the shops in the complex. Management: San Diego Unified Port District.