By the 1960s the older pier was in poor condition and the decision was made to build a new pier. One week after the new pier opened, the demolition of the old pier began (and plans included placing part of the rubble from the older pier around the new pilings, thus acting as an artificial reef).

On Sunday, February 19, 1967, the new 1,450-foot-long Belmont Pier opened and the local newspaper’s headline read “Throngs Hail Opening of New Pier.” The story reported that free live bait was given out all day long and recorded the initial catches at the new pier. The first fish officially caught was by an eleven-year-old girl, Rosemary Rodriguez, who caught a sand bass. Brian Williams, a four-year-old angler was the youngest to catch a fish—a bullhead. The oldest was 82-year-old Albert Parbst who caught a perch. The largest fish of the day was a 2-pound, 8-ounce bonito caught by 16-year-old Maureen Younger.

Among the pier’s amenities in those days was a Sportfishing fleet that operated from the 336-foot, Y-crossing at the seaward end. The Queen of the Sea operated as a half-day boat and the Hurricane operated as a three-quarter day boat. For many years it was possible to catch The Islander which served as a water taxi to take anglers out to the 150-foot-long barge Annie B.

Many of the old-timers feel that the fishing has gone down since those days, a fact which they contribute to pollution of the bay’s water and to the change in the mix of the pier’s anglers. Many of the pier’s regulars today are Latino and Asian and many are subsistence fishermen fishing for food (even though the food may not be particularly safe to eat). Since most of the fish, regardless of size, are kept, the population of larger fish probably has decreased. However, those who have the know-how still catch fish, including some that are pretty decent size. Today’s mix of anglers also represents, I believe, a change in the focus of the pier. The pier has become a family pier where regulars and their families will be found most days, especially non-school days. Some may protest this mix but activity at the pier is actually mellower and certainly less destructive than that in the late ’70s and ’80s and a change, I believe, for the better.

Plans were announced early in 2002 for the closing and renovation of the pier beginning in the fall or winter of 2002. Among the changes was the name. The rechristened pier became the Belmont Veterans Memorial Pier!

Plans called for tearing down all the current buildings and building new structures and it was said the pier could be closed for a year. The name did change, and some changes were made, but the pier stayed much the same. However, in 2017 new plans were discussed.

One of Los Angeles’ key selling points to win the bid for the 2028 Olympic Games was the array of existing, or soon to be existing, venues throughout the area.

Already in place are the Los Angeles Memorial Coliseum, which will be hosting the games’ opening ceremonies for the third time, plus facilities at UCLA and USC, the Rose Bowl, Dodger and Angel stadiums, Staples Center, StubHub Center, the Forum and, in Long Beach, the newly refurbished arena and, to provide the viewing area for sailing competitions, the Belmont Veterans Memorial Pier.

The pier is problematic, and, in its current state, there’s a good chance it won’t be around for the international event 11 years down the road.

Instead, the city is looking into the feasibility of either a thorough rehabilitation of the 1967 structure or, more likely, the construction of a new pier in time for it to serve as the viewing site for one of the Summer Olympic’s most photogenic events. “There’s no question that the pier needs major work right now,” said Long Beach Mayor Robert Garcia in an interview Thursday. “It’s in massive need of repair. It’s underutilized, and we’re going to come up with a plan to make it a great showcase for the city.”

In addition to the expected wear that comes from the elements, the pier sustained serious damage during the recent winter storms, including one on Feb. 17, which caused the Aqualink water taxi dock and the lower mooring dock to become detached and wash up onto the beach, where they were declared a total loss. The pier was closed for two weeks for repair. Concrete, too, has cracked and broken in several places and recently the wings jutting out from the end of the pier had to be closed for repair work.

“Even if the Olympics weren’t coming, it was something we were going to have to start looking at,” said Garcia. “But the sailing event being held here in Long Beach gives us a little push. We’re going to need to have a serious conversation during the course of next year about whether we’re going to repair it or rebuild it to make the pier become one of the great things in our community.”

A few years ago the city conducted a preliminary look at the pier; the conclusion was it’s nearing the end of its useful life, said Assistant City Manager Tom Modica. “So we have already been discussing the options of whether to repair or rebuild the pier,” Modica said. “It’s most likely we will rebuild it, because it would probably cost about the same as repairing it.”

Modica said a rough estimate for the cost of a new pier would be $25 million to $35 million. Already on the books is $200,000 in Tidelands funds set aside for a feasibility study, which Modica says will be getting started in the next year. He added the city will also be talking to the L.A. Olympics officials to see if there is any available money to use for a new pier. 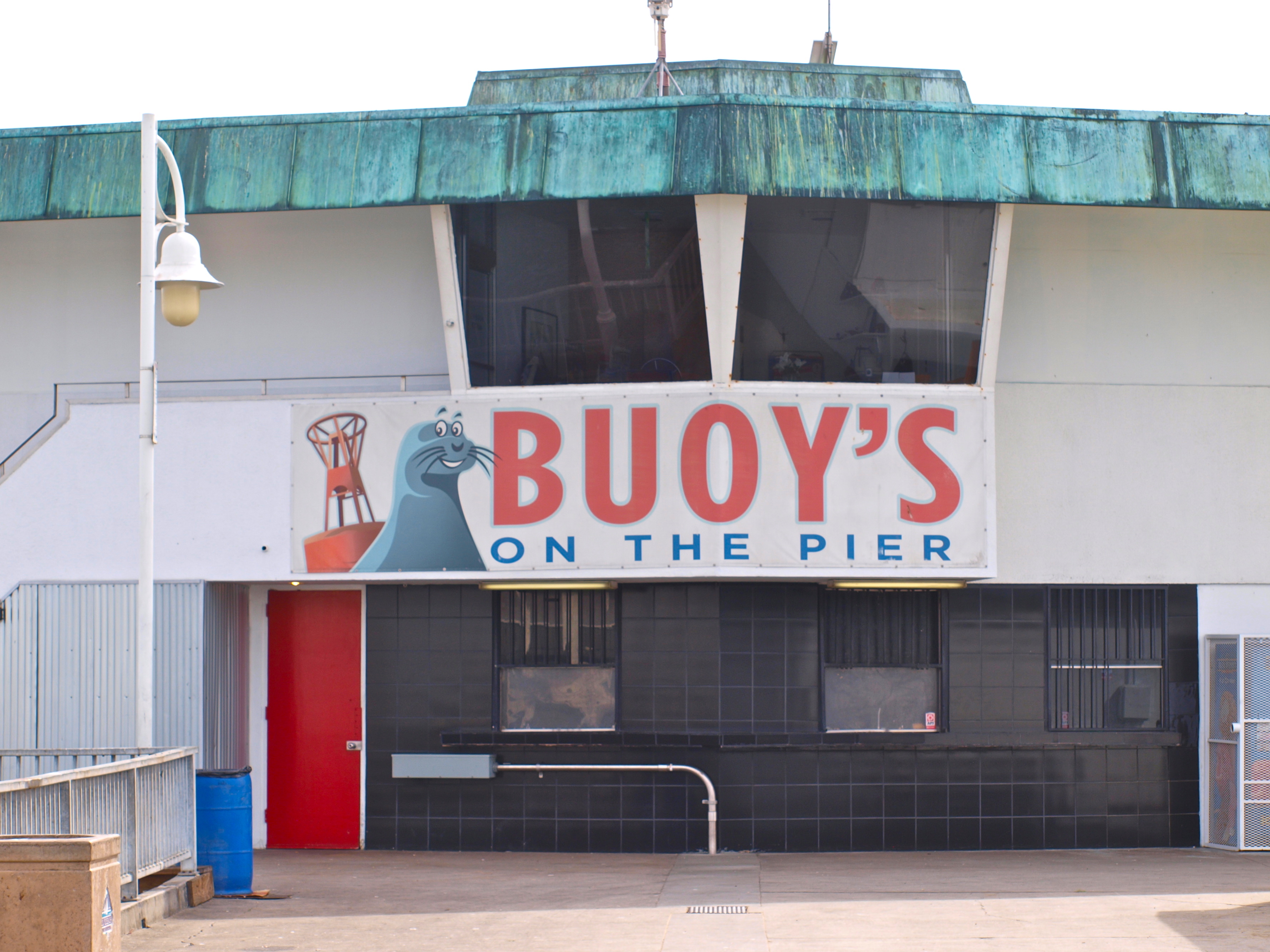 Hours: Open from 5 A.M. till sundown.

Facilities: Lights, some benches, fish-cleaning stations, portable toilets restrooms, and a bait and tackle/snack shop (that’s rarely open) are located on the pier. There is a parking lot near the foot of the pier ($.50 an hour with a 10 hour limit, no parking 6:30-7:30 A.M. on Tuesdays, and no parking from 12 midnight until one hour before sunrise). Both free and metered parking on adjacent streets.

Handicapped Facilities: Some handicapped parking in the parking lot at the foot of the pier. The pier is wheelchair accessible with a railing 42 inches high.