Species: Seriphus politus (Ayres, 1860); from the Greek word seriph (a kind of locust, an island near Greece, or a kind of wormwood—take your pick. Evidently, the scientist who gave the fish its scientific name, a Dr. Ayres, never specified why he used this name.), the Latin words us (word for an ending), polit (smooth or polished), and us (same ending word).

Identification: Queenfish have a long slender body, a large mouth with a projecting upper jaw, and small eyes. Their two dorsal fins are widely separated which distinguishes them from other croakers. Their coloring is metallic; silver-blue on the back, a silver or whitish belly, and dusky fins. 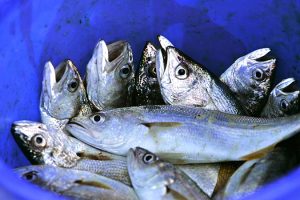 Size: To 12 inches, although most caught off piers are less than 8 inches in length. An 11-inch queenie weighed a little over a half pound.

Habitat: Common in shallow-water sandy areas, both oceanfront and in bays, especially around piers. Found from the surf zone down to a recorded depth of 594 feet. Often found in densely packed schools, sometimes along with white croaker. Most commonly found at depths from 4 to 27 feet happily munching on free-swimming crustacea, small crabs, and fish. They’re considered a nocturnal species that feeds mostly at night.

Shoreline: An occasional catch by shore anglers in southern California.

Boats: Not a common boat species but some are taken in southern California bays.

Bait and Tackle: The best bet is to either use a Sabiki/Lucky Lura-type leader (size 6-8 hooks), or to simply tie four size 8 hooks directly to your line spacing them every six inches with the bottommost hook 18 inches above the sinker. Drop your line to the bottom and reel in slowly until you find the depth at which the fish are biting. Once you find the fish, drop the leader down and slowly work it up and down. When the schools are thick you may not even need bait—the fish will strike the bare hooks. Other times you may need to use bait such as a small strip of anchovy or squid. Schools can be kept around your line by occasionally tossing in a few pieces of stale breadcrumbs or a few small pieces of anchovy chum. Schools often move into deeper water at night so adjust your spot on the pier accordingly. 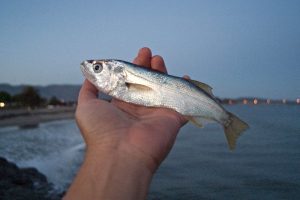 Queenfish from the Ventura Per

Food Value: Queenfish are mild-tasting, low fat fish that if larger would probably spark more interest anong seafood lovers. As is, only the larger specimens really have enough meat on them to use as food fish. Pan-frying is the common method of cooking.

Comments: This small fish is another that had a Navy vessel named after it. The USS Queenfish (SS-393) was a Balao-class diesel-electric submarine built in Kittery, Maine. Launched on November 30, 1943, it was commissioned on March 11, 1944. After training in Hawaii she began a distinguished career that included duty in the Luzon Strait, the Formosa Straits, and waters adjacent to the China coast. She sank many ships and engaged in rescue operations of Allied soldiers. She was at Midway, preparing for another patrol, when the war ended. The Queenfish was awarded the Presidential Unit Citation (US), and received 6 battle stars for World War II service. Later she served as Flagship Submarine Force, Pacific Fleet and was homeported at Pearl Harbor before later transfer to San Diego. She was struck from the Navy List in March 1963 and sunk as a target by the Swordfish (SSN-579), in August 1963.

Queenfish themselves are attractive little fish that are fun to catch even if they’re not exactly a sporting catch. Small queenfish can be used at piers as bait for halibut or any other large fish. Queenfish were numerically ranked first in an early Fish and Game survey of fish caught from southern California piers and jetties.