Shore fishing Oahu in back of the Kahala Resort

#1
I fished off the beach behind the Kahala resort for three separate sessions during my stay in Oahu. Went to a great tackle shot and got a travel rod and reel setup. They recommended fishing with a clear bubble float with a small circle hook and a plastic grub. The area I was fishing was a very shallow reef with huge spots here the water was less than 3 feet deep above large solid reef rock. There were some gaps in between the reef rock where the water would get around 5 feet deep. This extended for almost 100 yards out where you could see waves breaking and a more typical surf fishing environment.

The weather was warm but very windy. On the first day I caught an irradescent cardinal fish. The cardinal ran me into the rocks but I was able to wade out to where he was hiding and get him out. I also briefly hooked something larger and green but quickly lost it. I would get numerous bites but most of them seemed like smaller convict tangs that were unlikely to hook themselves on the size 6 circle hook that I was using.

The second day and third day I was able to get more action after adding a bit of market shrimp along with my grub. In the end the best action I got was abandoning the float and allow a fly lined piece of shrimp to drift under paved rock jetty where I was fishing. I hooked two very decent sized fish that broke me off in the rocks. Then I finally landed a very good sized porcupine puffer fish and another iridescent cardinal.

Glad I went through the trouble of visiting a local tackle shop. This place Brian's Fishing Supply was excellent and gave me invaluable information about shore fishing and boat fishing in Hawaii and also made some great recommendations for charters back on the mainland! Great place that I enthusiastically recommend. I would even contact them ahead of time so you can properly plan your trip. Had I done that, I think I could have chosen better fishing experiences while in Hawaii. 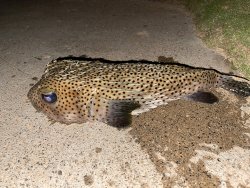 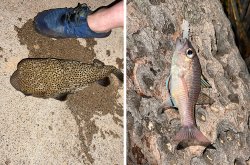 #3
Rusty said:
Fugu!
did you try and eat the puffer? 😂
Click to expand...
No. We were staying in a hotel without a kitchen plus I don't think I would be daring enough to clean it unsupervised because of the tetrodotoxin.
M

#4
It takes year of training for chefs, to learn how to prepare fugu.

One could die eating the fish if not prepared correctly.
M

#5
Mahigeer said:
It takes year of training for chefs, to learn how to prepare fugu.

One could die eating the fish if not prepared correctly.
Click to expand...
Except that is not a fugu, so he probably would have been fine eating it. If he could figure out how to fillet it.

Staff member
#6
I caught a pufferfish fishing from a pier in North Carolina MANY years ago (and before I kept records). They're strange fish. Back then, and maybe still today, shops along the coast would sell preserved puffer fish.

#8
I concur TheFrood. Fugu is a name for a class of fish like pufferfish, bass, jack, flatfish etc. Some are poisonous and the other are not.
As Mahigeer said you have to be trained in Japan and earn a special license to handle them for food. I am not one. But I have a friend ho is. When I went out fishing with him in Japan, we actually caught some and he IDed them to be a safe and good eat! Had a nice mean with them...
I do not know the name of the beauty evanluck found and if it is good eat or not...

Staff member
#9
I have caught pufferfish in North Carolina and do not believe they were poisonous.
M