#1
I was planning on hitting Fort Baker Pier on Sunday......Has anybody been there recently......mostly targeting perch unless the dabs are running....I am worried that the trip might be a bust because of the lack or rain and the high temps
D

#2
It has literally been YEARS since I have fished there...Life happens.....Still trying to decide if I even bother with the crab rings

Staff member
#3
It's always different but I would say those angling and those crabbing is often 50-50. A lot of crabs but most are undersized.
D

#4
If I can drag my sorry swing shift working ASS out of bed in the wee hours of the morning I hope to be on the road to Fort Baker by 7:30am at the latest.....No live bait....Just Gulp Sandworms....Plan to fish for a few hours and then head home....Might take Mom out to dinner in the evening
D

Big perch tide at 9am. Prickleback Palace by early afternoon. No dabs. Rockfish inside the jetty. Poking if you dare. You know the drill. Good hunting.
Click to expand...
As always....Appreciate the input Sir
D

#6
Met Redfish at the pier and we hung out for a few hours until the wind picked up.....He managed some shiners and smelt on rod and reel and with his cast net......I really need to get a new one.....Based on the buckets I saw the crabbing was ho-hum...….I think I caught the biggest perch on the pier on a a flesh colored Gulp Sandworm...….a nice Black Perch that will be lunch tomorrow....Deep Fried Whole....Skin on but scaled....With a Side of Onion Rings......Highlight of the trip was snagging a damn near brand new crab ring with my perch rig and being able to bring it up with a grappling hook that Redfish had with him.

Gave Redfish a package of Gulp Sandworms and some of the weights I poured for the save with the grappling hook......I really needed a new crab net 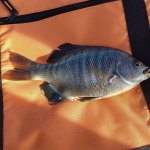 -Thanks again for the invite. Had a great time regardless of the limited fish action. I hadn’t been on that pier since I caught dabs on the last decent run about 3 years ago.

-There were enough baitfish around but didn’t feel the presence of any real gamefish.
I believe as well that the first rain will trigger the action to come with perch, herring, sturgeon, and striper in their migratory areas.
Last edited: Nov 4, 2018
D

Crab ring bonus, cool. Sure wish people would pluck all the rings that foolish crabbers snagged on the jetty. (Horizontal crabbing. Innovative. And dumb.) Bad for plugging.
Click to expand...
I used to drag that pier all the time with a grappling hook for lost crab rings and even commercial crab pots...….The more Sea Lions were around.....The more rings I ended up with...….Learned the trick from a friend by the name of Tim Bauer. I also cleaned up a LOT of lost gear that way, but it would often cost me at least one lost grappling hook a month. I made my hooks out of rebar that would bend out and release if one of the hooks got snagged.....But if you got tangled up with more than one of the hooks you were screwed.

Staff member
#9
Blackperch — one of my favorite fish. As for the rain, that seems to be one of the prerequisites for the sanddab. Usually December-February if they show up.
D

#10
I was shocked.....I consider myself a good cook but that perch tasted TERRIBLE.......I will not be keeping anymore until we start getting some rain
F

#11
Pogies are really pretty fish and they put up a nice fight.

You say it tasted bad - how so? Have you eaten them before, and if so how did this one differ?
D

#12
The Happy Wanderer said:
Did it taste like iodine?
Click to expand...
Don't make a habit of drinking iodine.......But it did not taste very good. Very strong tasting not like any perch I have ever eaten before....Almost metallic.....but not metallic...Hard to describe
D

#13
The Happy Wanderer said:
Very droll. The reason I asked is that I've long noticed the peculiar odor of perch in general at Fort Baker, on the pier and jetty both. Black perch and striped perch were among the worst. Not all of them, but enough (for me) not to keep them there. Bleeding helps--but not much. For some reason, rockies, monkeys and lings are okay. Must be what they eat. A lot of the crabs at FB smell that way, too.

This article is apt:

https://www.popsci.com/seasmells
Click to expand...
You bring up an interesting question...….I have to wonder if the Back Perch and Striped Perch in the area are more resident and thus pick up the off flavor because of their diet, whereas the Pile Perch and Rubberlips are perhaps more migratory and are therefore not as strong tasting? I used to hit the Jetty HARD for Monkeyface.....But I think I pissed off the spirits by keeping 4 HUGE ones, just one time, and they just shut off for me after that. Not to mess with the Fish Gods, I have not been poking there for years. I also used to use squid for my poking at the Jetty and I look at the price of a 3# box of squid these days...…$16.99 at Safeway right now....WHEN THEY CARRY IT......and I just WINCE......

Staff member
#14
I am not a scientist and know nothing about sea smells — other than that I have taken in many over the years. However, I would think the monkeyface eel are much more sedentary and resident that the various perch.

As for the perch, they move around. I remember the big runs of pileperch in the winter months at the old Red Rock Marina Pier in Richmond. And springtime always seemed a good time for blackperch and rubberlip perch at the Fort Baker Pier and the Sausalito Pier. Spring also seemed to be a good time for perch in the piers along the south part of San Francisco down to Oyster Point.

Remember this quote from PFIC, 2nd. Ed. — "A clue to one of the great mysteries of marine life—the migrations of fish—may be found in the behavior of one of the clam's near relatives, the mussel. The bay mussel, a black-shelled mollusk which clamps itself firmly to rocks or pilings, is a species distinct from those outside the Gate, and its spawn forms one of the most important food sources for the bay's fish. In the spring, influenced by unknown forces-possibly changes in the bay's salinity or temperature-it throws out vast quantities of cells called gametes, which combine to form the mussel larvae. Biologists speculate that this great seasonal larva production of the mussels may determine in some degree the migrations of the fish which depend upon on it for food."—Harold Gilliam, San Francisco Bay, 1957

I think there are several such events that provide impetus for the movement of perch and other fish around the bay and those events would tend to negate the feeling that these fish (blackperch and striped seaperch) are strictly resident to the Fort Baker area. I do not believe they are migratory like many species but I think their residence is larger than than just along the Sausalito area. If those two species do show a more pronounced bad taste then I think there must be other factors at work.

We need the scientists in our midst to attack the question.

#15
"We need the scientists in our midst to attack the question. "

"I am not a scientist and know nothing about sea smells — other than that I have taken in many over the years. However, I would think the monkeyface eel are much more sedentary and resident that the various perch. "

Very True......But they also have a significantly different diet than the perch do. What I have been wondering is whether Black Perch....Which in my experience are somewhat sedentary in their habits, more so than many other species.....Taste like they do in the Fort Baker Area because of their diet of crabs and other invertebrates, and the local water quality......Which as Glen wisely pointed out.......Can lead to a very Iodine like flavor in some fish.....It is also interesting to me that Striped Perch......Even the Huge ones at Trinidad....Tend to have flesh that is often mushy.......While other species Like Pile Perch and Rubberlips can often be hit and miss........A recent report I received from a Crescent City local reported his catch of Redtail Surfperch were mushy and had a "strong fishy taste" which is not my experience with Redtails for that far North at all. I have to wonder if this HORRIBLE pattern of Unseasonable Weather combined with some really messed up coastal currents and water temperatures could be part of the issue.....

#16
The Happy Wanderer said:
Definitely! We've been in the danger zone all week... By this, I mean air quality. It's been dry enough for fire danger for many months. Right now (edited at 9:45am) it's unsafe to go outdoors here in the Bay Area. And Marysville--those poor folks have got it worse than Athens, Mexico City, or Beijing.
Click to expand...
I haven't been able to wear my contact lenses for over a week....My eyes are too irritated.

Staff member
#17
Ran across this Email from nearly 20 years ago — same problem with the odor of the black perch from Fort Baker. I wonder who Glen was?

Nice going on the rubberlips. As for black perch at Fort Baker, do they still smell heavily of iodine? For the longest time they’ve been quite odiferous. I made the mistake of trying to cook a large one, but nothing I did could reduce the stench. Sort of like bleach or chemicals. I’m told by marine biologists that this is a natural phenomenon due to the fish ingesting local kelp or the crabs that eat the kelp. Red crabs are especially redolent; you catch a whiff of iodine right away when you hook into them and have them halfway up. Weird. Doesn’t seem to affect the striped perch resident in the area.
P

#18
it was mild to warm yesterday and calm waters. I ended up poke poleing, after crab snaring didn't yield much. Only small crabs from pokeing. Another family was just hand lineing into the holes. One guy got some rock fish.
I

#19
The Happy Wanderer said:
Definitely! We've been in the danger zone all week... By this, I mean air quality. It's been dry enough for fire danger for many months. Right now (edited at 9:45am) it's unsafe to go outdoors here in the Bay Area. And Marysville--those poor folks have got it worse than Athens, Mexico City, or Beijing.
Click to expand...
DSRTEGL said:
I was planning on hitting Fort Baker Pier on Sunday......Has anybody been there recently......mostly targeting perch unless the dabs are running....I am worried that the trip might be a bust because of the lack or rain and the high temps
Click to expand...
As I know Golden Gate bridge cleaning from old paint and fresh painting unstoppable. Could products of cleaning and painting partially drop to water and being consumed by phytoplankton and through food chain change taste of fish? Paint could consist metals...
Last edited by a moderator: Nov 28, 2018