#1
Again, an old report. Having trouble getting to the computer lately - but I’m still fishing!

Nov. 10: Low tide was 2.2 ft at 4 AM. High tide was at 10 AM at 5.7 ft. Just the way I like them. You have a higher than usual low tide and by 10 AM, I have had some time to get the feel of conditions and whether the fish are biting. I seem to do best at higher tides. I started fishing at daybreak - and what a daybreak - just a beautiful morning, clear sky, low wind, low swell - Let’s go fishing!

I had two spots I wanted to fish and they were both high tide spots. I did well at the first spot. I caught two grassies and a black and yellow. All were caught on fresh smelt, fishing out far. I started fishing spot number two about an hour before high tide. The fish were hungry there, also. I got another keeper black and yellow and the best fish of the day, a 14” grass rocky. Once again, they were caught on fresh smelt casting out as far as I could. Since the rockfish were biting, I was trying to avoid catching any cabs by fishing out far and using smelt instead of frozen squids. I usually catch cabs fishing in close using squid. This was one of the better fishing days I have had here on the Central Coast. I stopped fishing when they were still biting as we had enough fish for several dinners. 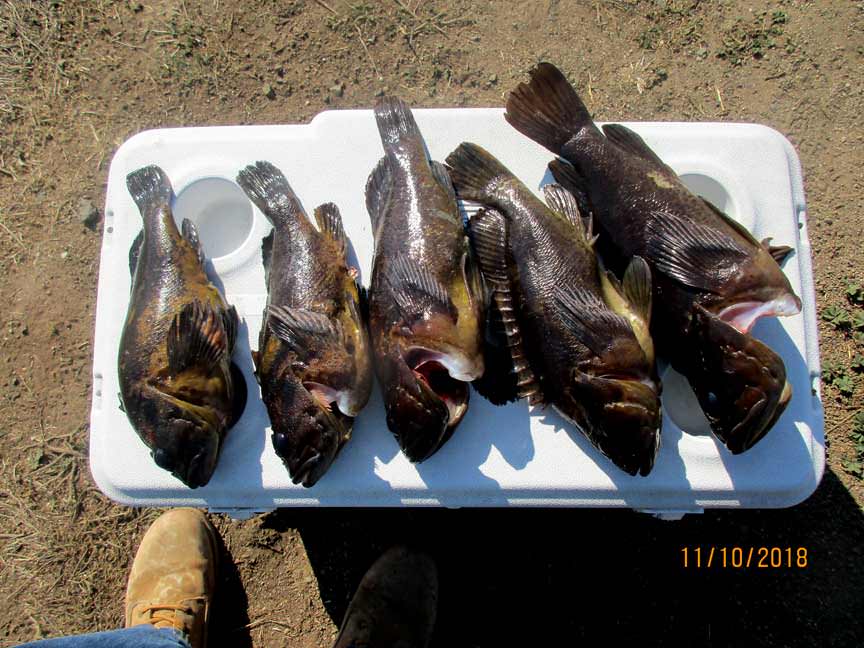 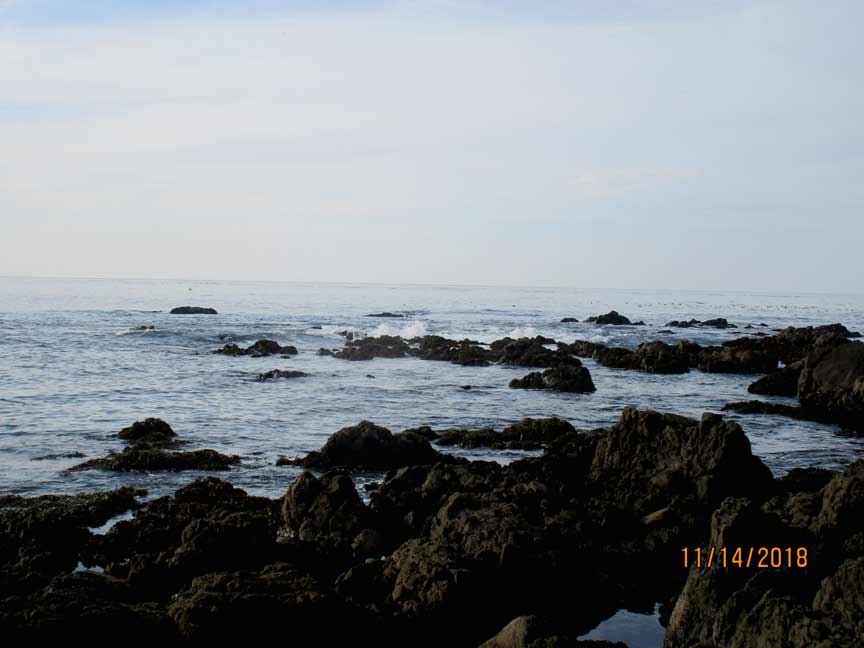 I’ve fished north of this spot and south of this spot, but never right there. It’s a shallow spot and you have to get there when there is enough water to get your fish in. It took awhile, but I got two black and yellow rockfish. Surprise, surprise. 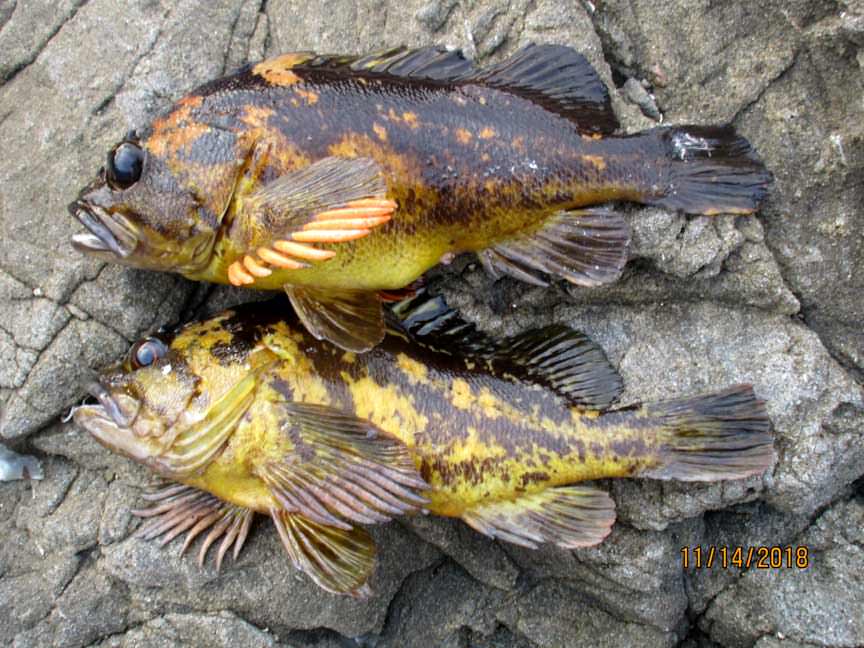 I had one more set of rocks that I wanted to try. I fished that spot for about an hour for nothing. But, at least I was getting my rigs back and not getting snagged as much as in the first spot. So, i made one more cast with a smelt head and got an unusual bite. And an unusual fight! I knew it was a good fish, but I couldn’t tell what kind of fish because of the strange fight. Somehow I managed to get this fish in through the rocks and kelp and get it to a more secure spot where I wouldn’t lose it. It was a 28” halibut!! What a shock! I haven’t caught a halibut since i was living in So Cal. 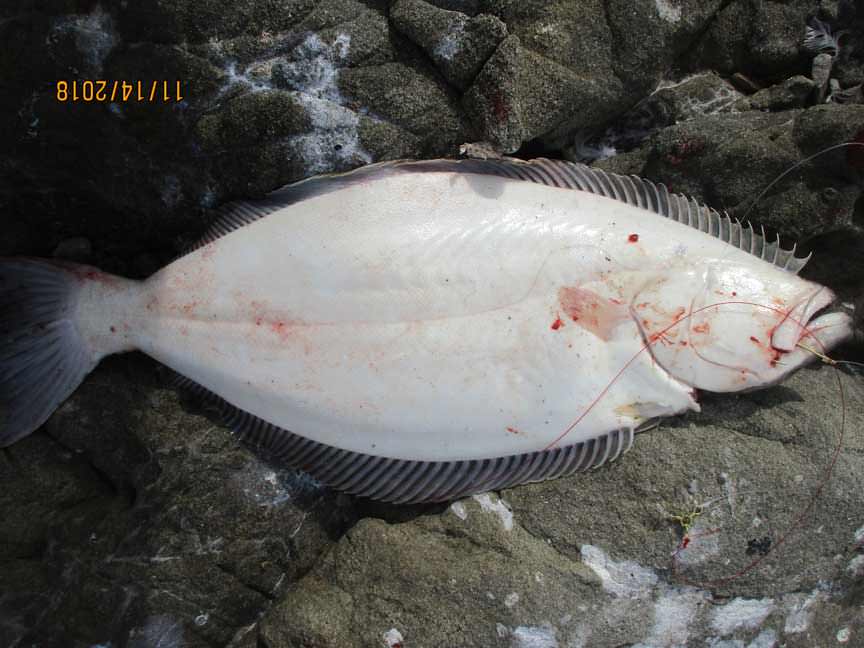 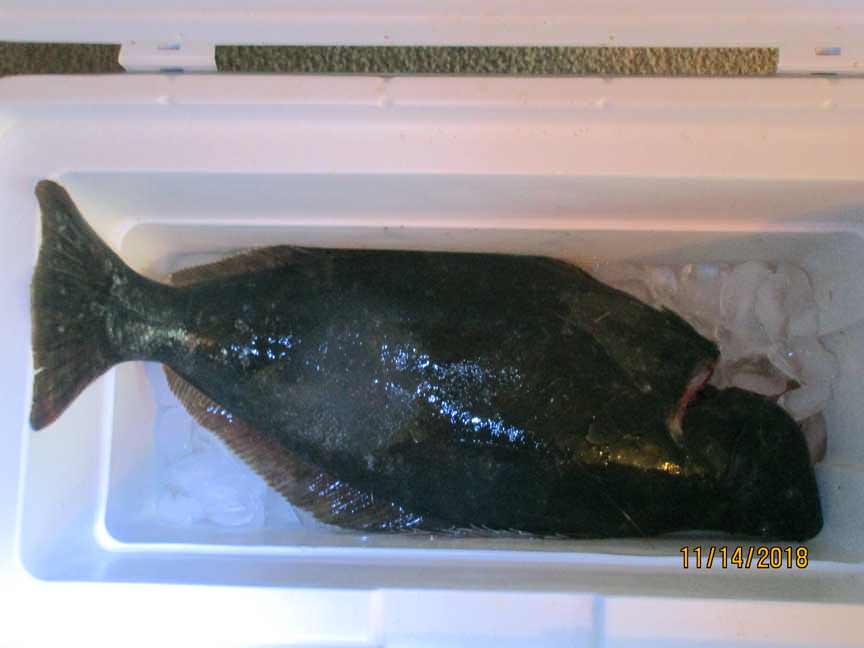 By the time I had pulled him in through the rocks, secured him in a safe spot, and took a few pictures he was already dead. I was surprised how quickly he died. It must have been the trauma of pulling him in. So I couldn’t release him which I was thinking about doing.

After preparing and eating halibut three different ways, my wife and I agreed that we still preferred rockfish. A good thing since this was the only halibut I have caught in 15 years. The rockfish taste better but the halibut sure takes a better picture.

Always a surprise when fishing on the Central Coast.
P

#2
Rockfish better than halibut!? Thats crazy talk! Congrats on the great catch and thanks for the excellent report

#4
That’s an amazing catch from the rocks!!
Nice going!
I agree, rockfish is better than California Halibut. Both are good though!
S

#5
Nice going! But it sounds like this would be a good time for a PFIC SURVEY. Halibut or Rockfish. Which one do the members prefer?
S

#6
Nice rockfish and hali! I like rockfish better, too. Halibut are fun to catch, but meat is leaner and dryer - very little tolerance for overcooking, almost more like a meat than a fish. If you season and add fat in cooking, halibut tastes good, but I'll still take a freshly steamed rockfish.