#1
High tide was at 8:40 AM at 4.6ft.
Low tide was at 3:15 PM at 0.1ft
I started out at a deeper water tide, got out there early around daybreak. Unfortunately, conditions were much rougher than the weatherman forecasted. I fished for a couple of hours for only two bites. The first one was a legal cab that I caught on squid fishing only about half-way out from what I would normally do. The second bite was a nice grass rockfish caught on smelt casting out far.

Off to a good start for the first time in a while. But the wind and waves were picking up even more so it was time to move to spot number 2.

This was an odd spot. You can only fish it part of the year and then it sands up and the rockfish move out. I hadn’t fished there for a while, but the spot seems to be a little more protected than the deep water spot. So, I fished for about two hours, got two bites and two fish. Both were grass rockfish. Both caught casting out far and on smelt.

The wind and waves were really getting rough by then, so I decided to call it a day. If a 4oz sinker won’t hold bottom, it’s just too rough for me.
Spring fishing can be challenging on the Central Coast. But a couple of good fish dinners makes it all worthwhile.

Some of the fish got the lemon, butter, caper sauce treatment from the Dutchman in Morro Bay. 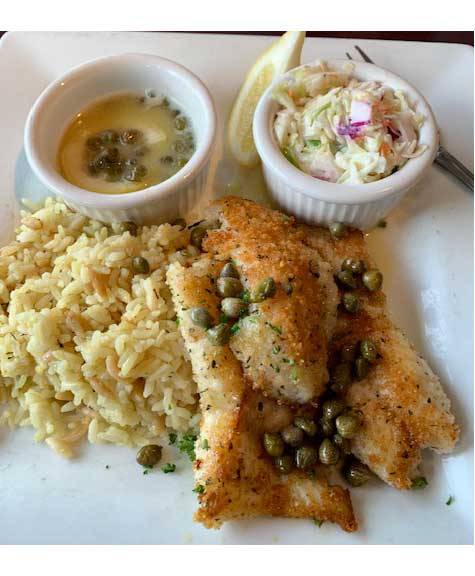 This picture was of my wife’s plate because of the rice. I can’t resist the garlic fries with mine.
S

#2
Beautiful grassies and love the shoutout to The Dutchman. A good friend of mine that I’ve recently made a rockfishing convert lives in Los Osos was recently talking about how much he and his family love that place.

The swells have been pretty crazy this year all along the coast and have definitely kept me from day-trips north or south. Glad to see you’re able to get out there in spite of the conditions and put some dinner on the table!

#3
Year in, year out, trip by trip, one of the most productive and consistent fishermen I have ever observed is frozendog. As a fellow rock guy, I know that each trip is an effort and a reward. Congrats and kudos to you. Also, thanks for posting. I appreciate you sharing the end product of your efforts as well.
dsch2251
You must log in or register to reply here.
Share: Facebook Twitter Google+ Reddit Pinterest Tumblr WhatsApp Email Link