#1
Feb 20: High tide was at 10 AM at 6.2ft
Low tide was at 5PM at -1.1ft.
I decided to try a new spot. I have fished around the area, but not right there. I had great expectations with the really high tide. Unfortunately, the rain caught up with me and I didn’t have any bites, so I moved to spot #2. Spot number 2 was worse because of the mud from the rain. This was one of the rare times I used some caution and moved on to spot #3. By now, the tide was going out strong and my hope for doing well on the high tide had fizzled. After making some casts out far for nothing, I changed targets. Time to start throwing squid at rocks hoping that a fish might be hiding there. It took awhile and I finally caught two just legal cabs on the squid. Both were caught casting to the rocks. 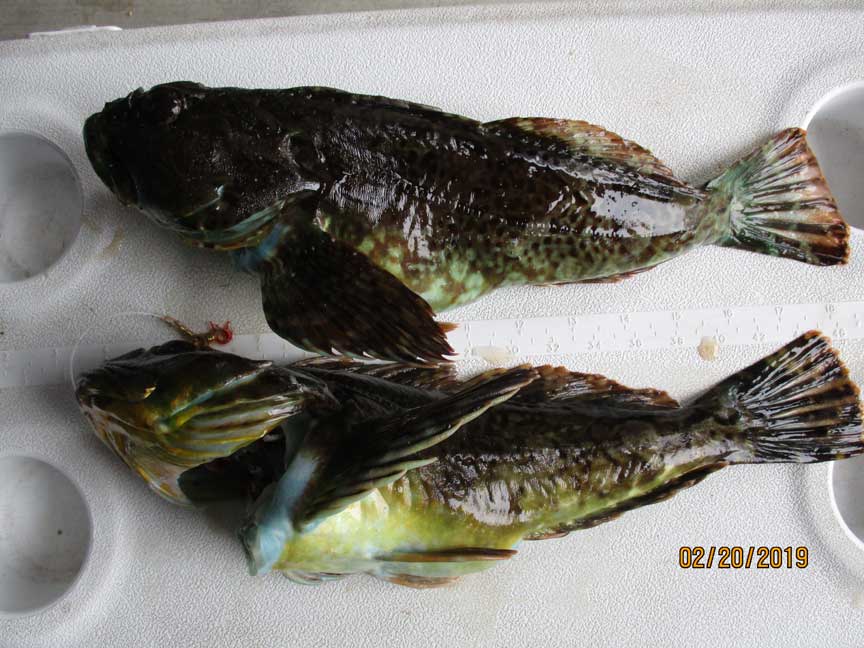 It was time to escape while I still could get some traction on the mud in the rain.
The cabs went with us to the Dutchmans in Morro Bay for the lemon butter caper sauce treatment. 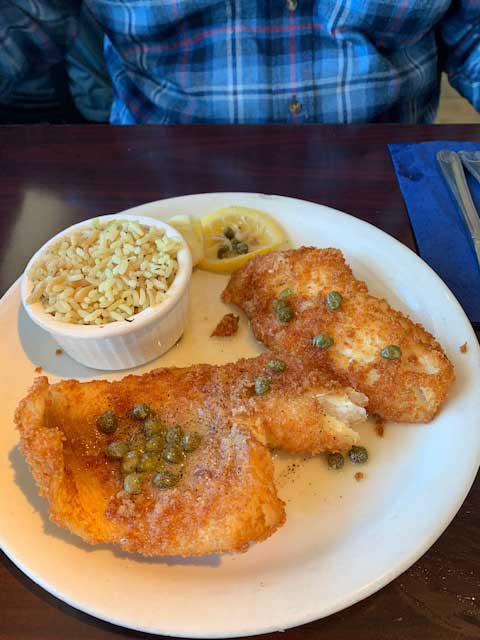 Feb. 25: High tide was at 2:30 AM at 5.0ft
Low tide was at 9:30 at -0.8 ft.
It was about a week later from my last trip and the tides were just the opposite. This was going to be a day for low tide fishing. But this was a rare day when the water was calm and it wasn’t raining. But there was loose kelp all over the place. So I spent the morning casting to the rocks for cabs again. I only had one bite, but it was a nice 18 inch cab caught on squid, casting about half-way out. The fish bit just as I moved my bait hoping to get somebody’s attention. 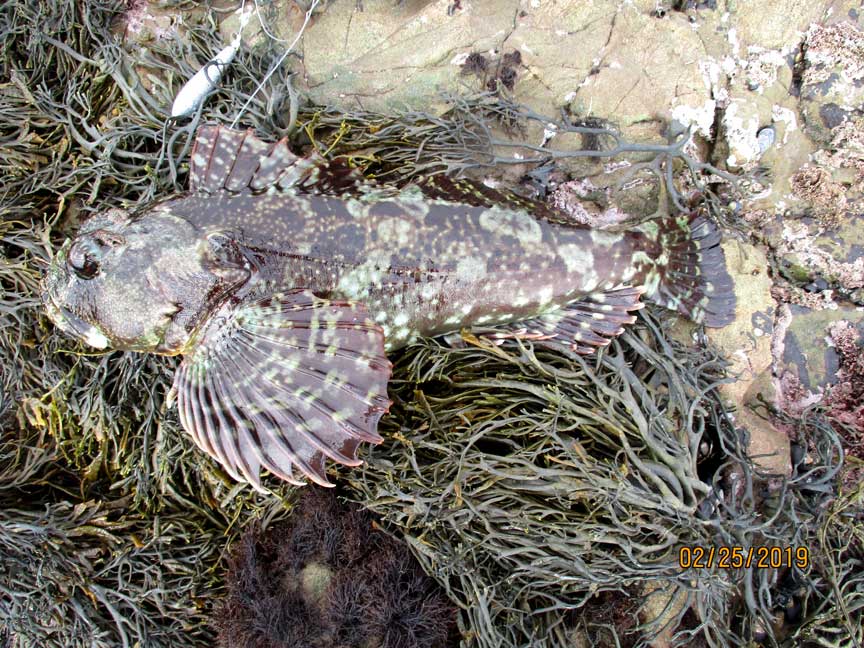 I moved to another spot that had deeper water. After a couple of hours of slow fishing, I made two casts and caught two fish in a row. How can you fish the same spot for nothing and all of a sudden two fish in a row - but then followed by nothing more. These two were both black and yellow rockfish. They don’t get very big around here, but they are good to eat. The fish were caught on smelt. 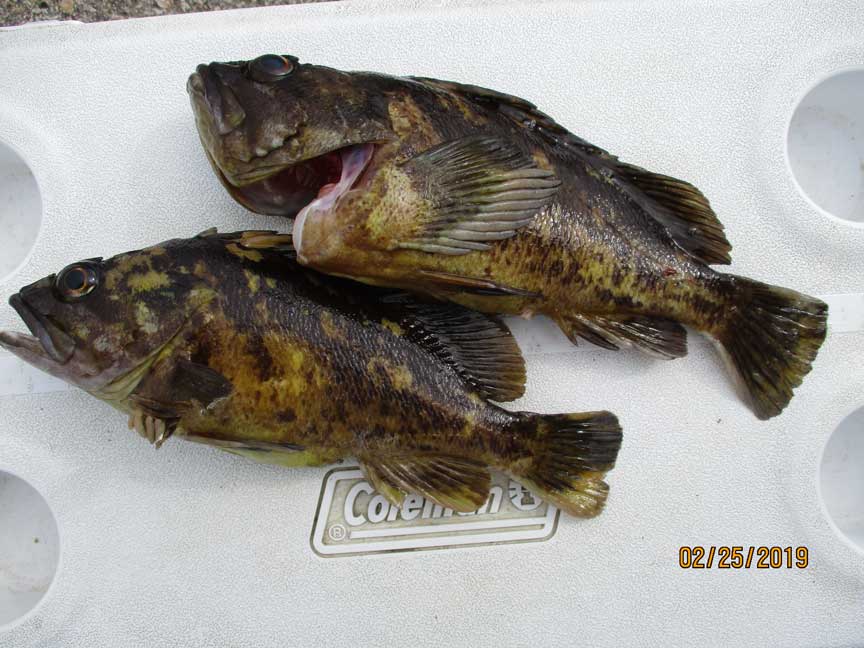 The cab went with us to Chulos for the fish and “no chips” treatment. 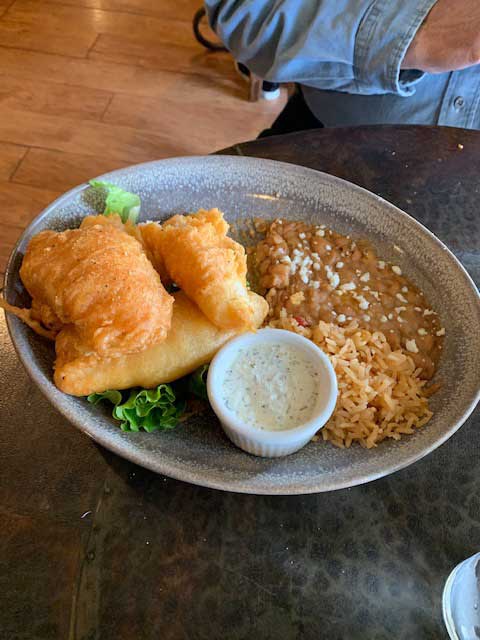 March 5: Low tide was at 3AM at -1.8ft
High tide was at 9 AM at 5.2ft.
Today would be a high tide day. So I went to one of my shallower water spots where the fish bite best at high tide. For a change, my plans worked out. I caught two grass rockies right around high tide. Both were caught on smelt and casting out far. 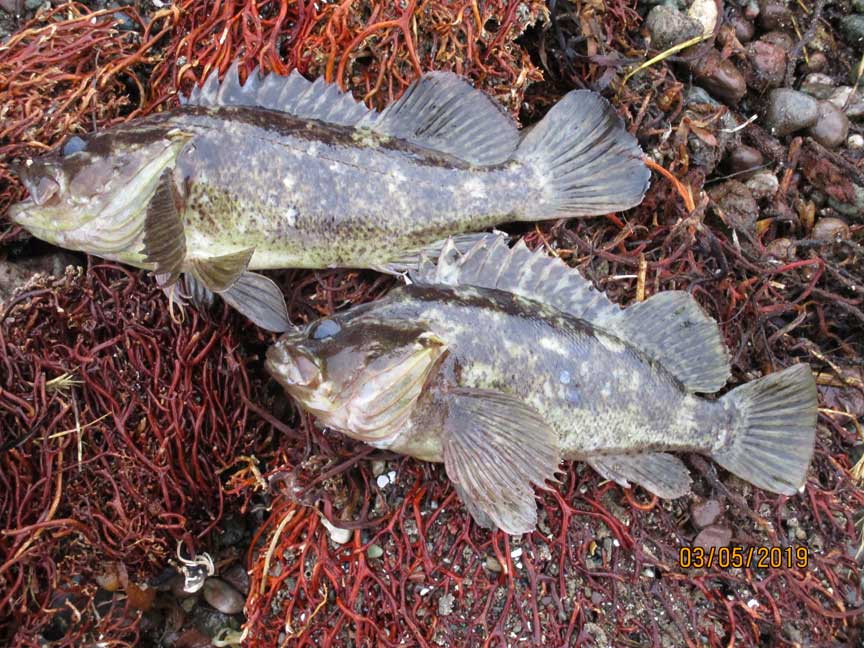 I moved to another spot a short hike away and fished a bit and caught rockfish number 3. The picture is in my head, sorry. Blurry picture from the camera.

This time, I cooked at home and made some fish “po” boys. Always good and easy. 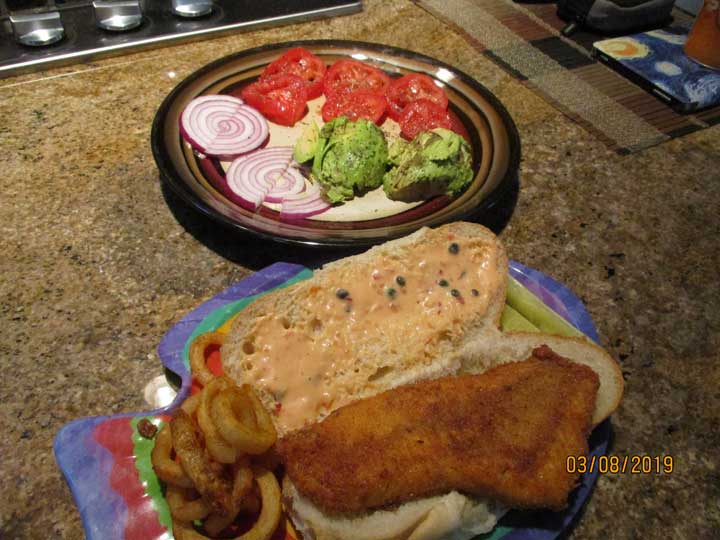 This was very typical fishing for this time of year. Weather and water have been rough. But even more so because of all of the rain this year. Getting to some of my favorite spots has been a real challenge because of the mud from all of the rain. Ah, the things we must endure to get some fresh fish for the wife (at least that’s what I tell her).
R

#3
Like Ray said, outstanding reports as usual. The Po Boys sound delicious. Thanks for sharing the trips FD. It's much appreciated.
M