#1
Been a while since I visited any piers due to a very busy work schedule. I'm SteveO from the old Message board.


Long Winded Report (Times are approximate estimates, actual times may vary)
When I woke up from a untimely nap at 11PM last Wednesday night I could no longer suppress the urge to fish. Been for ever due to work eating up all my time. Thought about all the places I could go here in the SF Bay.. old haunts.. what fish I could target locally. What rigs I was set up with (without having to visit a tackle shop).. and the thought occurred... if I start driving.. I could make a morning boat to Catalina.. And since I had 4 Bonito feathers, 7 3 inch Chartreus Space Guppies, 1/4oz jig heads, enough 25lb fluorocarbon leader for 6 rigs, my Launcher Floats, the decision was made... grab the gear and start driving south to Long Beach and the Catalina Express Terminal

Caught the 9:30 boat and was at the mole by 10:30. Smooth ride out to the island. amazingly beautiful day. Mid 70's, 10 to 15 mph breeze blowing on shore, clear sunny skies. Lots of kelp at my corner spot. Must have extended out about 25 to 30 feet.. Thinking of bonito all the way down I rigged my splasher set up with a bonito feather and tossed that out for about an hour with no bites what so ever.

There was one other fisherman throwing a bonito rig off the far corner near the mouth of the harbor not getting any love either. Another couple was fishing straight down next to me with plastics not getting anything either. Mostly due to lack of knowledge of the spot and lack of proper rigs/plastics. I suggested some live/frozen bait if they could get some.. but they just did their thing and eventually gave up around noon.

So after the first hour I switched to the tried and true Chartreus Space Guppy on a 1/4oz jig head and started casting.. another hour.. no love.. no bites.. no nibbles.. and it donned on me this was going to be a 1000+ cast day if i was to land anything.. I did manage to attract the attention of a sandpiper flying by the only bird in the sky.. so i took that as a positive sign..

About 1:00pm I get my first good hit on the line and manage to hook the fish about 30yards out.. fought pretty hard for the first few seconds.. and the bonito rush was about to kick in when i noticed the fight weaken and the fish started coming in on the easier side.. Didn't feel like a bonito.. and when it got close to the kelp it made a quick dart into the weeds and snapped off my jig head at the knot. At least there's life... By this time the people lining up for the boat were watching the show.. and who am I to disappoint.. Tied another Swim bait on and casted out again. about 5 minutes later I land the first Barracuda. about 28 to 29 inches.. Didn't measure as it was just a catch and release day anyways. Snapped a Quick picture and back into the pacific it went. Foot in picture for scale (Size 8.5 sandal). A wel timed Bluetooth speakers starts playing Heart's Barracuda. and the crowd goes wild.

around 2:45pm the guy fishing the other end of the pier gives up and packs up to hit the 3:30 boat.. No fish for him.. I am still casting endlessly with no action.. and that's when I notice a very light bump.. then another.. and I notice I have another barracuda following my lure all the way to the kelp line. More Boat line spectators show up and I start talking to a guy who see's 2 more following my lure in.. he was just stoked to see fish following my stuff.. and frankly so was I... I joked with him.. that the last one I caught I got with a full house of boat people and the show would start shortly. It was then the guy fishing the other end came over to talk to me. As i suspected.. he threw everything and no bits for him.. the bonito were nowhere to be found. We talked about my first barracuda.. and I told him of the chasers. and he left to take his place in line. about 5 minutes later.. i get another good hit but missed the hook up... 5 more casts.. and bam.. hooked up.. landed my second barracuda about 32 inches.. fatter fish and a better fight.. but still no bonito battle. The guy fishing the other end assisted in landing the fish and asked if he could have it and naturally I said sure. The guy that i joked with came back and laughed. Full house seems to be the secret sauce.

A billion more casts later and a few more followers, one more hook up and around 4:45pm this time just a mom and her 3yo daughter watching. This barracuda was on the smaller side.. 22 to 23 inches. unhooked and returned to the Pacific. I've never fished the Mole in summer.. so I do not know if the barracuda action is normal this time of year.. or if they have just taken over and infested the area... Was the first time I have ever caught barracuda on a splasher rig before. Was a little bummed there were no bonito.. but I still managed the 3 fish and had a beautiful day near the water. Who can complain about that.

By about 5:30 my back, ribs, wrists were shot.. Laid down on the bench and my back screamed at me, that's when I knew.. my day was done.. I fished hard with no breaks many many casts... had fun... caught the 6:30 boat back to my truck and started the drive home. Felt good to do a spur of the moment commando fishing trip.

Until the Next time.
- all is one under sun and moon

Staff member
#2
Steve, Great to have you back and congratulations on the barracuda. Wish I could have joined you. We need to get Scott out here again.

#4
SteveO said:
about 5 minutes later I land the first Barracuda. about 28 to 29 inches.. Didn't measure as it was just a catch and release day anyways. Snapped a Quick picture and back into the pacific it went. Foot in picture for scale (Size 8.5 sandal). A wel timed Bluetooth speakers starts playing Heart's Barracuda. and the crowd goes wild.
Click to expand...
love it.

great report. sometimes that fishing urge just kicks in...so you spent 24 hours straight awake?
Click to expand...
Probably more like 27 to 29 hours... once I got to Bakersfield I called it a night of driving around 10pm... could not fall asleep until about 2am to 3am last Friday morning (i could have made it home).

Had last week off from work.. so my vampire nocturnal sleep schedule was in full effect.. plus I had caffeine on the drive down and on the boat on the way back. as long as I get 5 to 6 hours of sleep I can function... I do prefer more sleep most nights... sometimes you have to just go for it tho just to remind yourself you are alive.
M

#6
How about a blast from the past? 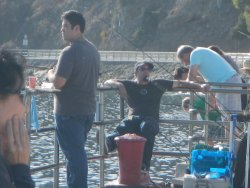 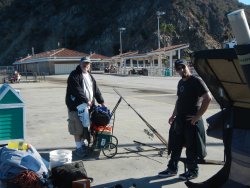 2014
Good to hear from you, guy. Every time I am at the Mole, I remember you and your buddy fishing that corner. Also the frighten face while some fish was spooling you at the GPP. Could not locate the picture.
As to why bonito is not there I have two theories as to why:

#7
Mahigeer said:
Click to expand...
No Cruise ships on that Thursday in Avalon. so can't say it was that... will be interesting to find out if it's just a time of year thing... or if we have to start a Barracuda derby...lol And the picts are awesome. good times/memories for sure. i have that GPP rod bend picture on my phone/facebook. i know exactly the one you speak of.

next time I make a trip south I'll try to give a little advance notice.
S

#8
The Happy Wanderer said:
Doc Hugs! Blast from the past.
Click to expand...
Now there's a nick name i haven't used in a while.. lol.. throw back to the old burningman/raver days 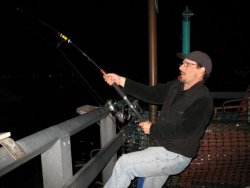 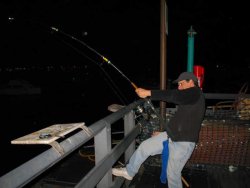 #10
It would be good to let me know when you can make it.

In a near future, Skipper and I planning to do an all nighter on the Mole. I will post about it.

Anybody who wants to join us is welcomed.

As to the picture, most of the GTG guests did not bring heavy stuff until that night.
From then on, some had the big "guns" at the GTG every year to see what is out there.