BIG 7-gill caught at the Ocean Beach Pier in San Diego. Record sevengill from a pier?

7-gill shark caught off OB Pier – the world's record? "You could easily fit two basketballs in its mouth”

Reid, who is a member of the OB Extreme Shark Fishing Crew, said his crew had left less than 30 minutes prior.
“I was alone and was the only shark fisherman on the pier at the time,” he said.

Photo — San Diego Reader​
“When I first hooked it, I knew it was a shark because I’d seen it as it was eating the bait, right below the pier, floating in the current on its side, gliding and drifting with the bait just going down its throat…so he’s hooked and starts taking off around the pier and I’m following it, I get close to it and ask a gentleman to bring me my gaff 'cause I need to bring it up, so I try to gaff it, I stick him once and he shakes it off and gets away, he did a death roll and dove down so I thought I lost him.”

About 15 minutes later, Reid re-cast. “Using the same bait, moray eel, I re-cast and he comes back. It took about an hour or so to get two gaffs in him.”

At this point, a small crowd was helping Reid as word spread fast – dude was catching a shark. “As we were hauling him up he got stuck half way up, its weight broke one of the gaffs, bent both of the hooks, broke the barbs…. the second gaff he just ripped off, broke the main line, belly flopped and was floating off in the current…. I had to get all my leaders cut off my gaff, sliced my finger open, pulled it up, went chasing him down the pier, swinging the gaff, finally got close enough, had a group of people following me as I was following it, I kept saying bring my rope, bring my rope, I need more drag, more rope, finally got him close enough to stick him good, used another gaff, and knowing it didn’t work the first time and he might fall off again, we used the rope to lasso its tail. Once we lassoed his tail we were confident we could bring him up. Took nine of us and about thirty pulls to heave him up, almost breaking the (pier) railing in the process.

Photo — San Diego Reader​
It's taken me years to catch this one, I would have released it but it's so big, I’m so tired and I’m like so full of adrenaline, I don’t really know what to do, throw it back or just keep it.”

He kept it. “We were thinking maybe the pier café would want it, they could stuff it and put it on display,” he added while staring at the shark. “But yeah, we’re going to eat it, my family will enjoy barbecued shark for Christmas that's for sure."

Reid has several videos of the catch on his Instagram feed:

According to multiple Internet sources, the maximum published length of the 7-gill shark is 9.8 feet in length and the maximum reported weight is 236 pounds as of 2017.

If Reid’s weight estimate is correct, it might be the heaviest 7-gill caught from a fishing pier.

Robert, who witnessed the catch, told me, “It was a monster, you could easily fit two basketballs in its mouth.” When asked what he’d estimate its weight as? “Around 400, I lived on a boat this summer around all the fish coming in. This thing was fat!”

According to PierFishing.com previous 7-gills caught from SoCal piers include:

Staff member
#2
At 9 1/2 feet in length, the sevengill mentioned above may be the largest caught from a California pier. As to the weight, that's a guesstimate and may be too high but we will not know since it wasn't weighed on a scale. Here's a few other large sevengills from piers:

A large 7 foot, nine-inch sevengill caught from the Goleta Pier in December 2009 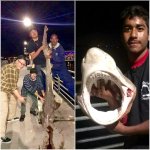 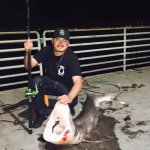 Another sevengill taken at the Ocean Beach Pier. This one by Gill in 2016.

Sevengill taken at the Crystal Pier (San Diego) in June 2020. No weight given.

7-Gill Shark—Although most common in the Bay Area, several have been caught from SoCal piers.

A sevengill taken from the surf at Pismo Beach in 2010

A sevengill caught by Matty in the South Bay 2012

And, just for the heck ——— sixgill shark caught up in Seattle. Still waiting for a picture of a sixgill from a pier.