#1
Does anybody here have particularly noteworthy ways that they have caught fish? There was that one crab-snared cabbie and I believe on the old board there was a post of a surfperch caught in a crab snare.

Here's two of my own:

Once during a "mack attack", I was fishing a single dropper-loop rig and caught two mackerel at once. One was hooked traditionally, the other had attacked the sinker and gotten it lodged inside its gill cavity.

On another instance, I was fishing a baby mackerel on a sliding bait rig. After a while, the bait stopped moving, I reeled it up and found a lizardfish a little longer than the mackerel caught on the mackerel's tail. It had tried to eat the mackerel tail-first, and the forked tail fin had gotten caught in its throat.

Staff member
#2
My strangest was when I was in high school in San Diego. A friend and I used to go down to the Dana Landing boat rentals in Mission Bay and rent a row boat (we couldn't afford a boat with an engine) and row out to fish by the bait barge that was located just a short ways off shore. Our main quarry was halibut but often early in the morning there would be a good bite on small barracuda. On this particular day I set up the rod and reel with a shiny gold Kastmaster lure and set the rod on the back of the boat before we headed out. As we rowed, the lure was bouncing up and down a short way up from the water (probably 6-12 inches). Imagine my surprise when a barracuda leaped up and grabbed the lure even though it was not in the water. My only time catching a fish when the line was not in the water. The date was August 8, 1964.

#3
I’ve caught Mackerel where the tear drop weight was tangled in the gill.

Caught 2 bonito on one jig.

People swear by those spring action clips that are found on the end of swivels. It makes lures easy to change. TWICE I had bonito hit my lure and open the clip, I loose my $3-4 lure, then I stick and catch the bonito with the clip.

Needless to say, I quit using the clips for that, but once in a while I get “experts” telling me to use them, trying to convert me back. It gets kind of annoying and I’m just like, “You do you.”

#5
onelilcrazyazn said:
My strangest was while baitfishing i got what i thought was a hit but ended up catching somebody line that snapped and my hook went right into their swivel
Click to expand...
Lol I’ve seen that done but with a sabiki that snapped off.
K

#6
onelilcrazyazn said:
My strangest was while baitfishing i got what i thought was a hit but ended up catching somebody line that snapped and my hook went right into their swivel
Click to expand...
Had that happen before too...a few times actually. The most recent was landing a fish my dad broke off by hooking the eye of his barrel swivel on a drifting boat. Before that was hooking into one hook of a lost sabiki rig (size 10 hooks) that had a trout on it while throwing crank baits. Landing catfish by whisker hooking them on trout gear was very fun too.

A notable one wasn't caught by me, but I saw the aftermath. They were dropping knife jigs for tuna and they had one dandy tuna hit the jig in such a manner and ferocity that it impaled the jig through its brain, killing it instantly. Best tuna they ever had they said.
D

#8
Although I didn't catch it myself, I can say the strangest thing I've seen happened just this morning as I witnessed someone land a lingcod with a crab snare from a pier. It was keeper length, too.

#9
I’ve caught smelt, rockfish, and even some sort of Ray in my crab nets on the municipal pier in sf. Once I even saw a guy get a 20+inch flounder with a crab net there. Thing almost didn’t fit in his cooler.

Staff member
#10
I remember that following a bat ray being caught one day at Goleta, "hearing" it make noises, and seeing its "Bettie Davis" eyes, Boyd decided to see if he could fish without a hook. I don't remember the details but I know he caught some fish just using the bait without a hook. Eventually he came back to using hooks.

#11
Ken Jones said:
I remember that following a bat ray being caught one day at Goleta, "hearing" it make noises, and seeing its "Bettie Davis" eyes, Boyd decided to see if he could fish without a hook. I don't remember the details but I know he caught some fish just using the bait without a hook. Eventually he came back to using hooks.
Click to expand...
Bat rays make these snorting noises as they force air through their spiracles as they try to breathe on land. And yes those "Bette Davis" eyes will get you every time. Speaking of fishing without hooks, there's a couple instances where I've caught small round rays or thornbacks that would grab the back section of a bait and refuse to let go.

#12
This is a pic of the lingcod I mentioned above. Excuse the poor angle which doesn't show how its head was caught in one of the crab snare loops. 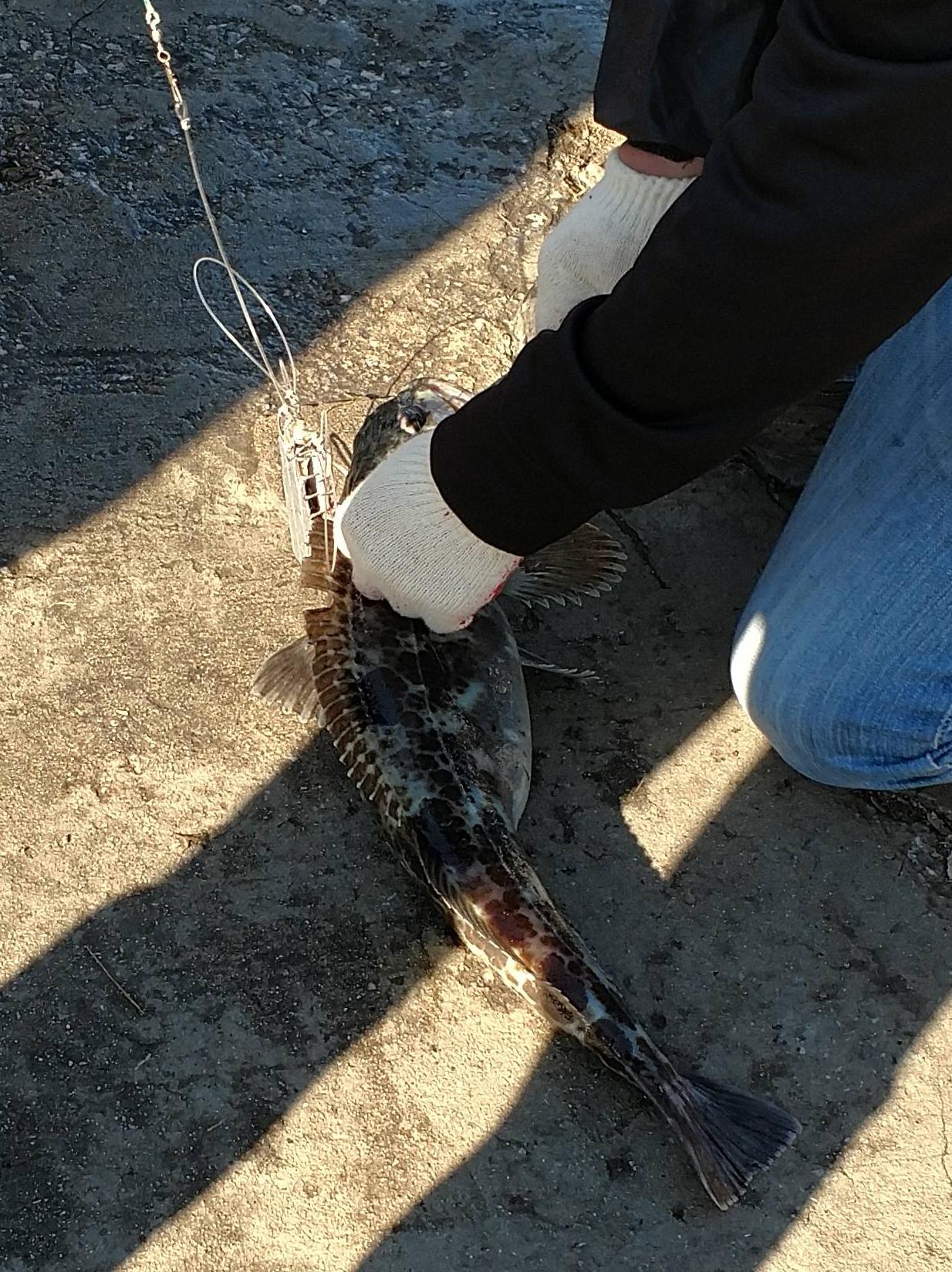 #14
My buddy caught a king salmon off the Freelance (3/4 day sportfishing boat out of Davey's Locker in Newport Beach) in the Huntington Flats while fishing for sand bass in August.. saw it first hand. And it wasn't the year when salmon came down to socal.
R

#15
Shore rock fishing with my son last year, he says that he thinks there's a fish on his line. The line was way out in the kelp. He starts reeling slowly, and it is just dead heavy weight. When it gets closer, we can see that he's dragging half the kelp bed in, and there is a sizable fish in it too. I go down to the water with my fish grabber and get the fish by the mouth. It's a big ling. Get it on the rocks, and the fish is hooked solid, but the hook leader is completely untied at the swivel! The tangling of the kelp and terminal tackle is how the fish got landed. Measured out to 34". I'll find the pic and post it later.
R

#16
Here's my son's ling landed tangled in kelp. If you look closely, you can see the hook and leader in the fish's mouth.

Staff member
#17
A nice ling from the rocks.

#18
Robf said:
Here's my son's ling landed tangled in kelp. If you look closely, you can see the hook and leader in the fish's mouth.

#20
I caught a tiny sand dab in my snare loop this weekend off the Santa Cruz wharf. It seemed the poor little guy would be dead for sure but as soon as l released the tension on the loop around his head he flopped back in the water and swam away. On the flip side of that last year in the same spot I caught a keeper size dungie on a sabiki laid on the bottom (to catch tiny sand dabs for lingcod bait).
You must log in or register to reply here.
Share: Facebook Twitter Google+ Reddit Pinterest Tumblr WhatsApp Email Link