So how are people spending their time?

Staff member
#1
So how are you spending your time if you're stuck at home?

I'm stuck at home most of the time so am catching up on some projects that need completion. (1) Some yard projects. (2) Cleaning out a lot of files and boxes in the garage that contain papers that I will probably will never need again. (3) Writing an autobiography that hopefully someone in the family will read down the road. (4) Finishing up two small books that should have been finished long ago. (5) Finishing a couple of articles for PFIC and kenjonesfishing.com. (6) Catching up on some genealogy (family history). (6) Doing a lot of cooking and testing out some new recipes. Etc.

Staff member
#2
Well, the autobiography really isn't intended for anyone other than family. It's interesting to look back and examine one's life; what are one's values and where did they come from? Of course at a certain point you can't even remember some of the things that happened and you always may judge or evaluate the information incorrectly. But it's fun. Only problem is I keep bringing in the history of the day or my thoughts on things so it's getting too long. I will say though that by the time I graduated high school I had lived in at least 27 different residencies, 22 towns, and six states, and had attended 15 different schools. I think the almost constant moves had an impact as well as my parent's divorce, especially considering that my minister father was relaced by a Marine step-father. Those things plus growing up dirt poor had to have influenced my life.

BTW, my music, especially Dylan and Prine, is almost always on when I am on the computer and I'm still reading at least one book a week. That's a given.
P

#3
I've been fortunate to retain my job, trying to work from home. In my spare time I play guitar, clean house, surf on internet and read about the 49ers, and I do go fish in my neighborhood, either at the shore or at the lake. Because of the weird weather perhaps I haven't been catching fish for a couple weeks though. Almost had one an hour ago.
M

#4
Still working fortunately, but spending more time with my kid. Building some new fishing rods I hope to use this summer/fall. Working on all the assorted projects I have been meaning to get to.
B

#5
well i find my self staring at my fishing tackle and wondering how did i get so much stuff time to start donating i look across the street everyday and see one or two people fishing off the rocks not close to anyone so i think it must be ok myself i don't really feel like fishing totally not me ugg Ken sounds like you have had an interesting life and you like Dylan so you turned out ok ha.Hope this changes soon Brock
M

#6
God knows I have so many house related projects that I cannot be bored. Depressed yes, bored not.
So I battled the depression by setting up a great fishing trip in the distant future and learning new subjects.

I got my sense of curiosity from my dad. May he rest in light as the Turks would say.
So I was wondering how the end loop on ropes are done. They are called---An eye splice.
It is easy to do a loop with a knot on a small diameter rope, but on a rope that is used to tie a ship to the dock?
So when I saw a maintenance man on the Avalon Mole making one, I had to ask. He showed me and I was amazed.
I checked YouTube and learned how and about the Swedish Fid.

1-The tool is called “Swedish fid”. An ice pick or knitting needle can work too, but the fid with its canal is more efficient.

2- This is what I was after. Of Course being the second one it is still not as good as I like, but functional.

As part of preparation for the Alaska trip, I learned that a rig called “Hoochie” is very effective for catching salmon.
I had seen them, but never used. They have to be trolled, so not much use on piers, I would guess.
Then I learned that there is a better version called “Wiggle Hoochie”.
Needless to say, but I will—I had to make some.
The hardest part was to Snell tie the two hooks not too far apart.
Below are some pictures:

3- Various parts to assemble Wiggle Hoochie. The bead help the head not collapse. The yellow plastic piece is similar to bills on bass lures. It makes the Hoochie to wiggle and dance.

4- The finished lure with added flash that I added.

Years ago I discovered that if I set a great trip, especially fishing trip in the not too close future, I can think (dream) about it when my day is not going so well.

Saved me a lot of money on psychiatric visits!
R

#7
Other than not eating out and getting together with friends, my life has not changed that much. Still doing my primary business of selling on ebay albeit income is down a bit. Got a huge lot of vintage auto parts that I've been selling on craigslist, and even though people have been coming to my house to buy, we maintain our distance even without a government monitor here to watch us.

We have a few acres in the foothills of the Santa Cruz Mtn's with a 30'x60' greenhouse, so I've been working on a sizable victory garden. With the greenhouse, I'm able to plant early, so squash and some greens are already producing with beans, carrots, beets, fennel, etc following close behind.

Other than that, we have a couple project cars and motorcycles that keep us busy. Wife has worked from home for 20+ years for a big international company which has been stable, so I am grateful for that.
S

#8
I have been giving in to my ADD. I came across the Circles of Apolonius in a Scientific American article in the late 80s or early 90s, and have played with it from time to time since the mid 90s. I finally took it far enough that I found enough patterns within patterns to write the program that plotted this: 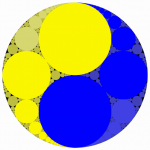 Each of the circles is tangent to the surrounding circles, and each has a radius and center that can be expressed as fractions, that can be predicted, and written as a function. I am questioning if I want to spend the time to figure out how to fill in some of the holes.

#9
Nice work Steve. I'm guessing that all of the holes can never be filled in. There will always be some space between circles.
D

#10
Making a bunch of fishing lures during the weekend. I'm fortunate that I can work from home.
S

#11
Robf said:
Nice work Steve. I'm guessing that all of the holes can never be filled in. There will always be some space between circles.
Click to expand...
Hi Rob,
Yes, there will always be holes, and it takes more circles, with more complex functions defining the fractions, to make less and less impact. This goes with the rule: "It takes 10% of the time to complete 90% of the job, and 90% of the time to finish the last 10%. Of course, as you pointed out, this is a job that can never be finished.

#12
lately I've been building a guitar and other woodworking stuff. I built two tables as well
P