Staff member
#1
I talked to Red Fish on my way up to the bay and he mentioned about getting together that night for some fishing. It would be late but we decided to give it a try. We first met up at the Sierra Point Pier but it had no lights so we headed over to Oyster Point which is just a short distance away. Oyster Point Pier has lights and we would do a little shark fishing. I was not equipped for shark fishing, and wasn't sure I could haul in a large shark or bat ray if hooked, but Red Fish said he had extra shark poles and could help me bring something big in if needed. So be it. We would arrive at the pier and find the lights in working order as well as a good fish cleaning station, also with lights. Two anglers were there when we arrived and one said he had earlier caught two starry flounder and an unknown fish that turned out to be a thronback ray (still relatively uncommon in the bay). The other angler showed us a picture of a shovelnose guitarfish he had caught (also relatively uncommon). Thus we thought some fish might be available.

Robert would cast out four shark rigs. Two were baited with the jacksmelt I had caught earlier in the day at the Redwood City pier, while two were baited with perch heads he had caught. Unfortunately, in the two hours we were there we didn't have a bite. The pier closes at 10 p.m., the ranger came by to remind us of the time at 9:30, and we left just before 10. Our feelings after seeing the well maintained pier, and the clean restrooms, was that it was a well managed pier.

BTW, before leaving Robert gave me some ghost shrimp he had pumped up earlier in the day at Point Richmond. He had seen the question I posted on PFIC as to ghost shrimp being available on the peninsula and he hand delivered the same. It was much appreciated. 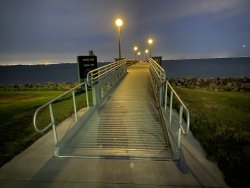 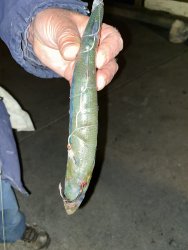 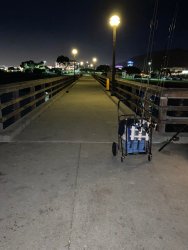 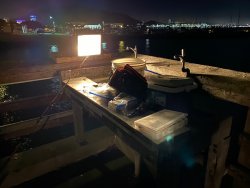 #2
Cool way to rig that jack smelt! Never seen that before!