Staff member
#1
I headed up to the Bay Area on Sunday with four goals: (1) Update my information on the peninsula piers given the changes over the past few years, (2) Take some new pictures, (3) Test out if my right shoulder and arm could handle casting, and (4) Hopefully catch a few fish. The first two goals was accomplished. As for number three, the arm seemed fine casting given I had brought two fairly light outfits that didn't demand much strength or force on the shoulder to cast. But, I would have a sore shoulder each night and have some pain from the final day on. As for catching fish, it would prove to be one of the worst fishing trips I have ever made to the area with zero catches at several piers. The tides seemed a little funny (maybe the moon), water movement was poor (which affects the fishing), and in a couple of cases I was not equipped to seek out the fish that were apparently in the area. Nevertheless, it was great to get away and do some fishing.

The first stop was a new pier, the Redwood City Pier. I had fished the old pier, and had hoped to make the opening of this new pier a couple of weeks ago, but given the rain I decided to wait until conditions cleared.

I would arrive for a short visit Sunday afternoon and found the small pier populated with a half dozen anglers on the pier, all fishing for jacksmelt. I didn't want smelt and fished on the bottom using a variety of baits—pile worms, anchovy, squid and market shrimp, all to no avail. In the last half hour I went ahead and put a big bobber on the line and managed two decent-sized jacksmelt.

Some notes: (1) There are about a dozen parking spaces adjacent to the pier with more a short distance away. (2) Restrooms are available across the parking lot near the Spinnaker Sailing office. (3) There are no lights and no fish cleaning sinks on the pier (I really wish they would consult some anglers when building/rebuilding piers). (4) Apparently open dawn to dusk although one source says the closing is at 8 p.m. (5) A food truck featuring seafood is apparently found near the pier most days. Good food but a little expensive. The pier is easy to find, just take the Seaport Blvd. exit and follow it to Seaport Court, turn left and follow it to the end. 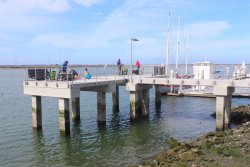 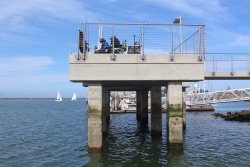 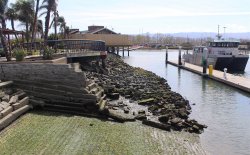 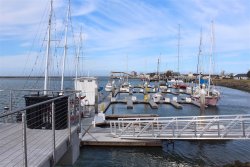 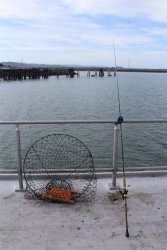 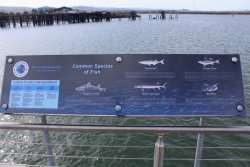