#1
Finally managed a fish. This is the first one of the season for me. It came off one of the piers along the northern part of the City. The fish hit a "candy bar" size live smelt on a slider rig. The bait was just large enough to use a trap hook and the fish hit a little after the mid-morning slack, just after the current picked up again. The fishing on the San Francisco side of the Bay has been unusually slow, but it's just starting to pick up right now. While there might be several reasons for the slow start to the season on this side of the bay, my suspicion is that the very cold water coming through the Gate is the main culprit. By May of last year we were well into some good fishing. The fish measured 31 inches and was "thick". Got a great assist from a fellow fisherman that had a net. And then thankfully, I got to return the favor by netting his keeper halibut later in the day. 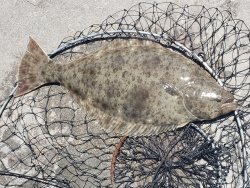 #4
Nice going and good report! I think the colder water temps/weather were a great factor in a lackluster bite this season.

#5
Lawson Landings fishing report this past week noted that baitfish are finally moving into Tomales Bay. I wonder if the same is also happening now in SF Bay? I did see terns working the shoreline at Crissy last week.
You must log in or register to reply here.
Share: Facebook Twitter Google+ Reddit Pinterest Tumblr WhatsApp Email Link