#1
I sadly haven’t had a chance to fish too much in the past months with many personal and professional obligations, so I was excited to venture out for the first time in a while for the fall SF Bay run. It turned out that last night was maybe the best fishing night of my life in terms of action.

Tried two spots, one old, one new. First one was in the East Bay where I stuck to a Lucky Craft Flash Minnow at sunset and only had one small striper to show for it after about an hour of casting. Debris started getting bad in the water so I left. I debated if I had my fix or if I should keep going.

Naturally, I went…Second spot…. I could see boiling as I walked over. I pretty much ran to the bank and put on my 1/2 oz white/black Spro Bucktail with a Gulp trailer as quickly as I could. My line had a knot twist in it that I didn’t even bother trying to fix for thirty minutes because I was getting hit on EVERY single cast, sometimes just on the drop, and the knot twist just meant I had to cast a little shorter. And if one took a swipe and missed, another would be sure to follow. Fish were generally in the 14 to 17 inch range.

After the first ten or so fish I ended up switching to different lures to see if I could get used to them and learn other techniques. (I’m still not good with a swimbait.) I even finally ended up fixing the knot by cutting jt off and re-tying. In the end, I was still way more comfortable with the bucktail but got the only keeper of the night on a 3/4 oz Rat L Trap. Had to take a pause to brain out and bleed the fish.

After about an hour the boil became less active as the tide bottomed out. I lost count of how many fish I caught, it was maybe around 20 for 75 minutes work. Went home and cleaned out the one keeper. An undigested anchovy revealed to be the catalyst of the night’s fun. The only other thing in the stomach looked to be a small pile worm.

It was good timing as I will unfortunately miss the rest of October fishing in the Bay. Today I have a serious case of striper thumb. Good luck with all with the World Series bite! 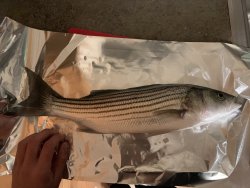