Ran across this old picture...

Staff member
#1
This dates back almost twenty years (2002). It was a meaningless, made up award but I still liked it. Sinker lived in the Ventura area (where he fished with Pierhead (Boyd Grant) and was one of the early members of PFIC. He then went on to start his own web site before eventually selling it and moving to Florida. He was at the initial Get Together in Catalina and I think came to the first Mud Marlin Derby. I still hear from him occasionally. 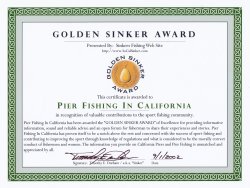 Staff member
#2
Could use a certificate like this for PFIC.