#1
Fished Oceanside Pier for the first time on Sunday. We arrived at 9:30AM and found a great parking spot at a 4 hour meter caddy corner to the entrance of the pier. Inshore area was crowded so we made our way mid pier and set up on the northside between the bait and tackle shop and the next landmark.

As we were just starting to fish a guy fishing the south side just a bit father down than where we were setup landed a keeper sized halibut (estimate around 24”).

We setup two hi lo rigs and started fishing shrimp and lugworms. We caught a handful of small sand dabs and also got many bites. Some felt like smelt bites. Others seemed like bigger fish but we could not hook one to identify.

I made my way to the end of the pier and fished a larger hook sabiki. A decent sized horn shark was caught at the end earlier in the morning. There was slow but steady action on mackerel for guys fishing floats. I dropped my sabiki to the bottom tipped with shrimp and caught 4 queen fish in fairly short order. To get the queen fish to strike it seem like both jigging and bait were required. Just one or the other did not seem to produce fish.

I made my way back to the mid pier section and started catching smelt to use as bait. I baited a smaller sized smelt on a size two mosquito hook on a carolina rig with a 1.5 oz egg sinker. After about 30 minutes of waiting the tip of my rod bent in small jerks 3 or four times and then stopped. I put some pressure on the rod and a small 12" halibut was on. The first small jerks were the bait fish trying to run. The halibut struck and then did not move. I was happy to land a notable fish mid pier as the area is not one that I spend a lot on time at.

Slow day on what is reputation wise a good pier. 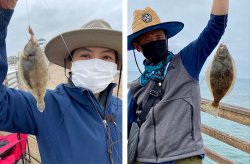 #2
Thanks for the report.

Were there closed areas due to damage?

#4
Mahigeer said:
Thanks for the report.

Were there closed areas due to damage?
Click to expand...
Pier seemed fully open.
M