#1
I got to Moss Landing at 5:59AM, still too dark to see anything clearly. The only other vehicle sitting there was a old 80's rv, not too unlike the one I used to go camping in as a kid. Flashlight in hand, I started to scurry along the rocks, picking mussels and poke poling holes as I went along. In the 2 and a half hours of this, I caught and released a small cabezon and a tiny gopher rockfish. 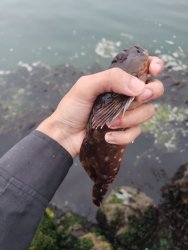 Near the end of my time at Moss Landing, with the only weight in my creel being some small mussels and my squid, something substantial took hold of my poke pole. I tried to force it out, but my coat hanger broke clean off, ending my fishing at Moss Landing for the day. 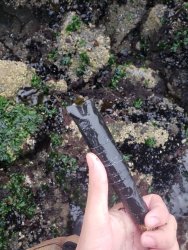 I started for Wharf no.2, and arrived at 8:15 AM. The surf zone was completely devoid of anchovies, almost apocalyptic in it's barreness. I decided to try out the end of the pier, since I still wanted some bait of some kind. Interestingly, I did find the anchovies out there, a few feet from where the railing for the pier ends. These anchovies were larger and in better condition than the swarm of small ones I had caught last week.

After about a hour with 7 of them in the bucket, the whole school disappeared. I tried to look for the tell tail flashs and dimples, but no dice. So, I kept jigging on, eventually and slowly catching a few jack smelt and Jack mackerel. A brown seagull with a blue tag on his foot constantly circled around me, taking two smelt as a "visitors tax". One tourist lady commented that he must be a good friend of mine. Personally, I would say more of a estranged acquaintance. Once I was done fishing, I started heading to the Coast Guard pier at 10:03AM.

For the first few hours, it was the bleakest fishing I ever had at the pier. I was fishing about midway on the pier, with one rod out with a jacksmelt for a lucky lingcod and a handline dropping some squid into the holes. Something in the kelp found my squid, but was too small for my 2/0 hook. I kept going smaller in hook size all the way down to a size 8, finally hooking it and seeing it to be a beautiful small sculpin. 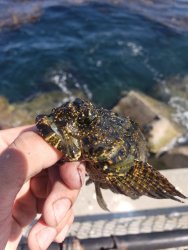 After a quick break and paying the meter till 7:35 pm, I started fishing the holes in front of the parking lot.

These holes were far more active than the ones out further down the pier. The first couple holes brought out 4 small cabezon and a decent sized B&Y, my first keeper from the pier. I kept going and dropped my squid into a fairly shallow looking hole next to the wall. Something lightly nibbled it, and I set the hook, with a large amount of weight at the end. Thinking it was kelp, I quickly brought it up to unhook it. The snag turned out to be my first ever monkeyface eel, about 18 in long and black like my jacket with little orange spots dotted all over its body. 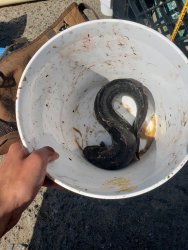 I kept fishing for 3 more hours, catching two more smaller eels and another keeper rockfish in between a bunch of throw backs including a kelp fish. I lost another good sized eel in the kelp, the hook popped out just when his head was out of the water after a 15 min fight. If you still want him, he's probably still in there. 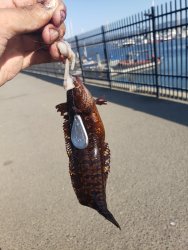 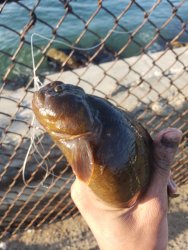 It was a very successful way to end the day. I went home at 6:57pm, thankful for the success I had and for the tasty food I was gonna enjoy 😋. Here's a picture of one of the eels, fried in Panko crumbs and permesan cheese🍽 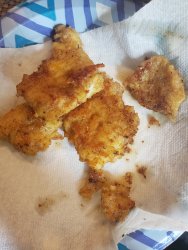 P.S.- Sorry for posting this four days after, just been busy and all that. Hope you'll enjoy this report, I'll probably skip this coming week, but will be out fishing next week. See ya next time 👋

Staff member
#2
Thanks for the report. Always looking for reports (and reporters) for that area.
M

#3
Awesome report! I Your posts and pictures show me what awesome species you got over there.
B

#5
Nice! Really miss fishing down there. But man, what a hassle getting there. They really screwed up Ca17 and 1 from San Jose to Santa Cruz, and 101 is a long march. Used to head down and fish, sleep in my van on the side of the road, get up and fish some more. Bygone days.
You must log in or register to reply here.
Share: Facebook Twitter Google+ Reddit Pinterest Tumblr WhatsApp Email Link