Met my cousin and her husband at San Clemente Pier. I fished from 7AM-11AM. They arrived around 8AM and left at 10AM. They switched off fishing a single rod with a Size 6 Hayabusa Sabiki under a float that was baited with market shrimp.

I fished a high/lo with a size 6 bait holder and size 8 mosquito hook baited with a piece of lug worm and a piece of market shrimp. I caught:
5 Black Surf Perch
2 Sand Bass, 1 small and a 15" (Personal best)
A 13" Sheephead
1 Yellow fin croacker
6 Jack Smelt
1 Wall eye surf perch 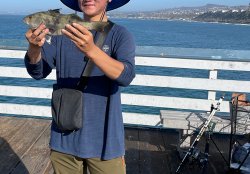 Probably the best time limited session I've ever had fishing on a mainland pier. While I was cleaning my fish I hooked a good sized fish on live smelt that ran me under the pier and broke me off.

A pretty big trigger fish was hooked by a guy fishing the left corner at the end of the pier but the fish came off the hook at the base of the pier.

No bonito were caught by anyone and did not see any bait boils while we were there. 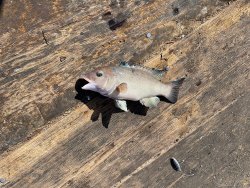 #2
Man you've been slaying those fish! Leave some for us lol.
M

Staff member
#4
Good to hear. I hope to be down there in a few weeks.
E

#5
EgoNonBaptizo said:
Man you've been slaying those fish! Leave some for us lol.
Click to expand...
Time for a jetty session soon?

#6
As long as I don't break my knees again haha. Doesn't help I'm stuck up in Davis for school.
B

#9
EgoNonBaptizo said:
As long as I don't break my knees again haha. Doesn't help I'm stuck up in Davis for school.
Click to expand...
Oh yeah I forgot. You guys are back on campus now. Bummer!
B

#10
@evanluck how did you rig the live smelt? high/low?
E

#11
Barracuda J said:
@evanluck how did you rig the live smelt? high/low?
Click to expand...
Carolina rig with a half ounce egg sinker
B