#1
We booked two spots on a party boat out of Waikiki named the Tortuga. The tickets were around $120 per person. The boat was on a 3 hour tour of the reefs around Waikiki. Left at 8AM and returned at 11AM. Frustrating for me to watch a fishing demo by the deckhand that lasted in my opinion 20 minutes too long. The first fish was caught by the deckhand while he was try to demonstrate how to resolve a snag on the reef. The fish was a tan colored triggerfish. This should have been our first clue - best way to catch fish was to be as close to the reef as possible.

We were using rented rods and unfortunately the one I chose had too little line on in to reach the bottom at a few different spots we tried. We were using dropper loops with pieces of squid. All the rigs and the bait was provided by the boat. When they let us start fishing, I caught the first fish which was a speckled hawkfish. The deckhand also caught a good sized needlefish fishing a piece of squid on a split shot rig. 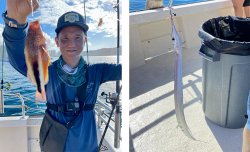 My girlfriend caught the next three for the boat: a black trigger fish, a purple goatfish, and a lizard fish. 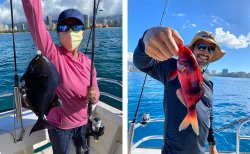 Supposedly there were 10 fish total caught on the boat but the deck hand pretty assertively showed the fish we caught around to the rest of the anglers but neither my girlfriend nor I remember seeing him showing around any other fish caught by other anglers.

This was definitely a tourist boat. Not a total waste but it would have been great to find something between this and the charters that go trolling for marlin. I think the reef fishing was the right type of fishing for us but a longer trip and better equipment would have been appreciated. Also, the next time I will bring my own market shrimp as I feel that would have gotten more attention that the giant squid that we were provided.

The frustrating thing about fishing on boats in general, is how little time you get to figure out an area. If fish aren't being pulled up one after another in 10 minutes, the captain leaves. Being a shore angler primarily, I'm used to having more time to get a sense of the structure that we are fishing and to figure out how to get the fish to bite and set the hook. Most spots I'm just starting to get bites when the captain pulls up and leaves.

BTW, I think the company is for sale so if anyone is thinking about running a party boat in Waikiki, check them out.