#1
A short report-KJ will have the full metal jacket.

Arrived at 8:30am to meet Ken and his wife Pat at the entrance to the pier. They were signing people in.

Gary from MRGC issued bait at the base of the pier and I passed out loaner rods to kids that did not have their own.

Kyle Magdamo (UPSAC member Rita’s son) was a judge for the fishing contest.

The tides were not the best, as it was the bottom of the tide when the derby of 2 hours commenced at 10:30am. None of the people I took names for prior to the event showed up with the majority of the kids being club members and their friends' kids.

A good time was had by all despite just a moderate bite with the 1 kid pulling in an approximately 37” bat ray to win on his 80# braid. Quite a few bat rays broke off off the kids’ poles we had rigged with a light-weight set up with 10# monofilament that were not landed. Bat rays were the bulk of kids' catches.

So, I ended up sun burnt on the underside of my biceps 💪 where I missed with the tanning lotion and a yellow jacket 🐝 bite on my finger when I was hosing down the cleaning table, but all and all a good time!

After hosing down the rods and assisting Bill, Gary, and another guy from the club take the terminal tackle off the rods, I went inside and took a few photos with KJ’s camera while he handed out awards.

Last but not least: I got to fish the pier until the lights went out (8:30pm when it went dark).

I had to wait quite awhile (hours) for the bite to tun on. Organized my sloppy terminal tackle in my bag while I waited (wish I had a copy of Ken's book to kill the time). Caught a baby bat ray as my first catch that appeared to be a few months old.

After that, I caught 5 stripers on bay anchovies to include the 22” slug pictured. Snooky Rigs were the ticket 🎟. No action until about 6 but well worth the wait and you couldn’t beat the serenity and the view as everyone else went home. 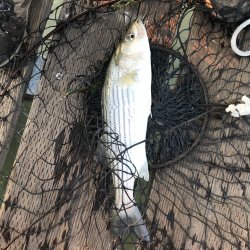 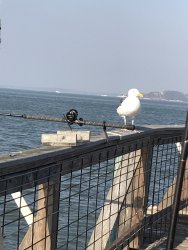 Staff member
#2
Just arrived back in Fresno and will try to get a report out tomorrow. 82 kids signed in (I believe) and as Robert said quite a few bat rays and a lot of small leopard sharks along with the usual jacksmelt. Not much variety this year.
You must log in or register to reply here.
Share: Facebook Twitter Google+ Reddit Pinterest Tumblr WhatsApp Email Link