#1
Making a quick report so that i'll update with pictures later. Phone was running low on batteries so some notable catches did not get captured.

Arrive at 7AM after taking the 6AM boat out of Long Beach. Set up to fish the bottom with a size 6 and size 4 bait holder hook on 30lb leader on a hi-lo rig. One hook is sized up from my regular setup and it turned out to be a bad move for this kind of day. The bite was steady but dominated by smaller reef fish and garibaldi. Lost lots of bait to clever small reef fish fishing with pieces of market shrimp and lug worms. After breaking off my rig on a kelp snag, I switched to two size 6 Mustad hooks which are smaller than the Owner hooks that I typically use. After that my hookup ratio increased significantly.

As per usual squid stayed on the hook better but didn't get as much attention. Noticeably absent for most of the day was the Sheephead and white fish bite. Casting out 50-100 yards did not generate decent bites until the very end of the day when I started landing smaller whitefish and 3 decent size Sheephead. Landed one 13" Sheephead, one 11" Sheephead, and one larger Sheephead that I lost in the kelp. Close in the bite was very active but dominated by garibaldi and smaller reef fish. I caught my first rock fish (copper?) from the Mole.

Also fished a sabiki under a float trying to get bait. This yielded some good bait sized senorita wrasses and too many blue perch. I fished a carolina rig on the bottom with live senorita wrasses and caught a 13" Calico, a moray eel, and an octopus. Also lost a good sized fish to the kelp and pulled the bait too early on a couple decent bites. Still learning the balance of letting the fish eat the bait versus waiting too long and having the fish run me into rocks or kelp. I'm using a reel with a baitrunner feature and perhaps it would be better if i just turned the baitrunner feature off or at least turn it off sooner after detecting the initial bite 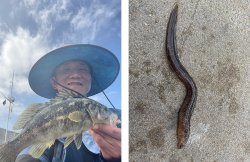 There was a group of anglers who fish for bonito all day throwing cool hand made flies on DIY multihook sabiki rigs and splashing bobber and feather rigs. Their persistence was rewarded a couple bonito for the day.

Total catches for the day for me:

Thinking going back and taking my Dad on April 24.

Staff member
#2
Nice variety. The rockfish is a kelp rockfish not a copper.
M

#3
Thanks for the report.

I take it when you use a bait runner reel, you are not holding the rod in your hand.
If so, may I suggest using circle hook?

#4
Thank you for your nice report. Love the variety. Sorry you lost a big sheephead by the kelp. Wonder if you were using a hi-lo rig? When casting out for whitefish/sheephead, using only a single hook helps me avoiding kelp snags. No need for a reconfirmation of Ken's ID work of course but I too saw a kelpie in your photo.
You must log in or register to reply here.
Share: Facebook Twitter Google+ Reddit Pinterest Tumblr WhatsApp Email Link