#1
A friend and I tried to go fishing at Hueneme Pier, but the system the city attempted has fallen apart. From mid-pier out, the pylons and cones used to mark fishing areas have all been moved around, and people are not respecting social distancing. Many were not wearing masks. We decided to try Ventura.

At Ventura we found more room, and better social distancing. There were a lot of families enjoying fishing, with or without success. Shortly after arriving someone landed a good sized spotfin croaker. Most of the other fish we saw caught were white croakers. I had two rigs, a medium light pole with a size 8 sabiki, and squid strips, and a medium heavy pole, with a high/low rig baited with shrimp. I caught a small croaker on the sabiki, and later somehow snagged a shovelnose guitarfish on the same rig. It was a challenge trying to control it on the lighter pole. It headed out toward the end of the pier, and I did not think I should chase it during this time. Eventually it came to the surface, and another fisherman used his net to land it. 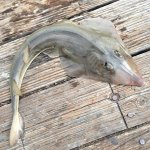