Staff member
#1
I tend to think they are not worth the effort but I could be wrong. By the way, they are actually not crabs but what's called squat lobster.

#2
Ken, I was just thinking about those today.... not to eat... but for bait. Dan Hernandez had some of those in his live well along with live sardines for bait at Catalina Island. I think he said for calico but I believe they would be a good sheepshead bait. How would you catch those, a minnow trap?

Staff member
#3
To be honest I don't know how you would catch them. The only ones I've seen were washed up on various beaches. Some were collected by anglers (including myself). I tried them as bait on the pier but actually didn't catch anything on them.

I think in a boat if you saw them come swimming by you could net some and perhaps in deeper water they are good bait.
M

#4
I used a net and skimmed the water surface during the Cedros Island trip. The Calico were hitting them hard, and I caught a lot of Sheephead there.

No sheepshead in Pacific Ocean.


42-We saw a lot of these red tuna crabs swimming on the surface when leaving the marina.

45-One of many sheephead caught using red tuna crabs.

Staff member
#5
But has anyone tried eating them?
M

#6
Langostinos are also squat lobsters. I have not tried them, but I would think tempura fried whole like spot prawns as sweet shrimp in sushi bars they would be pretty good. Tails are too small to really bother with by themselves. They make great bait when fresh. Unfortunately they get mushy and soft after freezing like ghost shrimp.
M

#7
I vote to call them langostinos, since they look more like lobster than crabs.

#8
Good point, no sheepshead in the Pacific; that would be the Atlantic, so drop the S.
Perhaps we can skim the surface and catch some red crabs at Catalina?
S

#9
For what it's worth, their closest relatives are porcelain crabs:
https://en.wikipedia.org/wiki/Galatheoidea
But, that does not mean much: crabs developed multiple times from other decapod lines.

#10
Red Fish said:
Good point, no sheepshead in the Pacific; that would be the Atlantic, so drop the S.
Perhaps we can skim the surface and catch some red crabs at Catalina?
Click to expand...
Once at the Mole, I saw many a boils. I tried different bucktaiIs with cast-A- bubble, different lures and no action. I assumed the boils were caused by bonito. Which would hit everything. However, no reaction to my various offerings.

As I gave up and started to bait fish, I saw a very large calico bass come to the surface and gulp something. Then I started to notice the floating Langostinos (Tuna crabs).

Soon after I found the best replica in plastic from China. I caught bonito in Cedros Island with one. Nothing yet at Catalina.

Staff member
#11
It pretty much sounds like no PFIC'ers have tried eating them. I made this up but haven't posted it since I'm not sure it's a relevant species to post for the crab and lobster section. The posted articles on crabs and lobster are on species sought out by pier anglers and are both commonly caught and edible. This might be more suitable for a "Bait" section if we had one.

Identification: Generally bright red and in appearance resembles a lobster although having a shorter abdomen. A species of squat lobster from the eastern Pacific ocean.

Range: South to Chile but primarily found on the west coast of Baja California. During warm-water, El Ñino years they enter California waters and during those years have often been noted as far north as San Francisco. In the 2017 El Ñino they were seen (for the first time) as far north as Newport, Oregon.

Habitat: Free swimming in offshore Continental shelf waters, sometimes in vast pelagic swarms. Also found on sand and mud bottoms to nearly 300 feet deep. During El Ñino years they are often carried inshore and stranded on California beaches. Feeds primarily on zooplankton, copepods and other small organisms. In turn, it is an important food for fish such as tuna, billfish, and other large pelagic species. In addition, whales, pinnipeds (seals and sea lions), sea otters, sea turtles and Humboldt squid will feed on pelagic crabs when available. When washed ashore they can be an important food for sea birds. 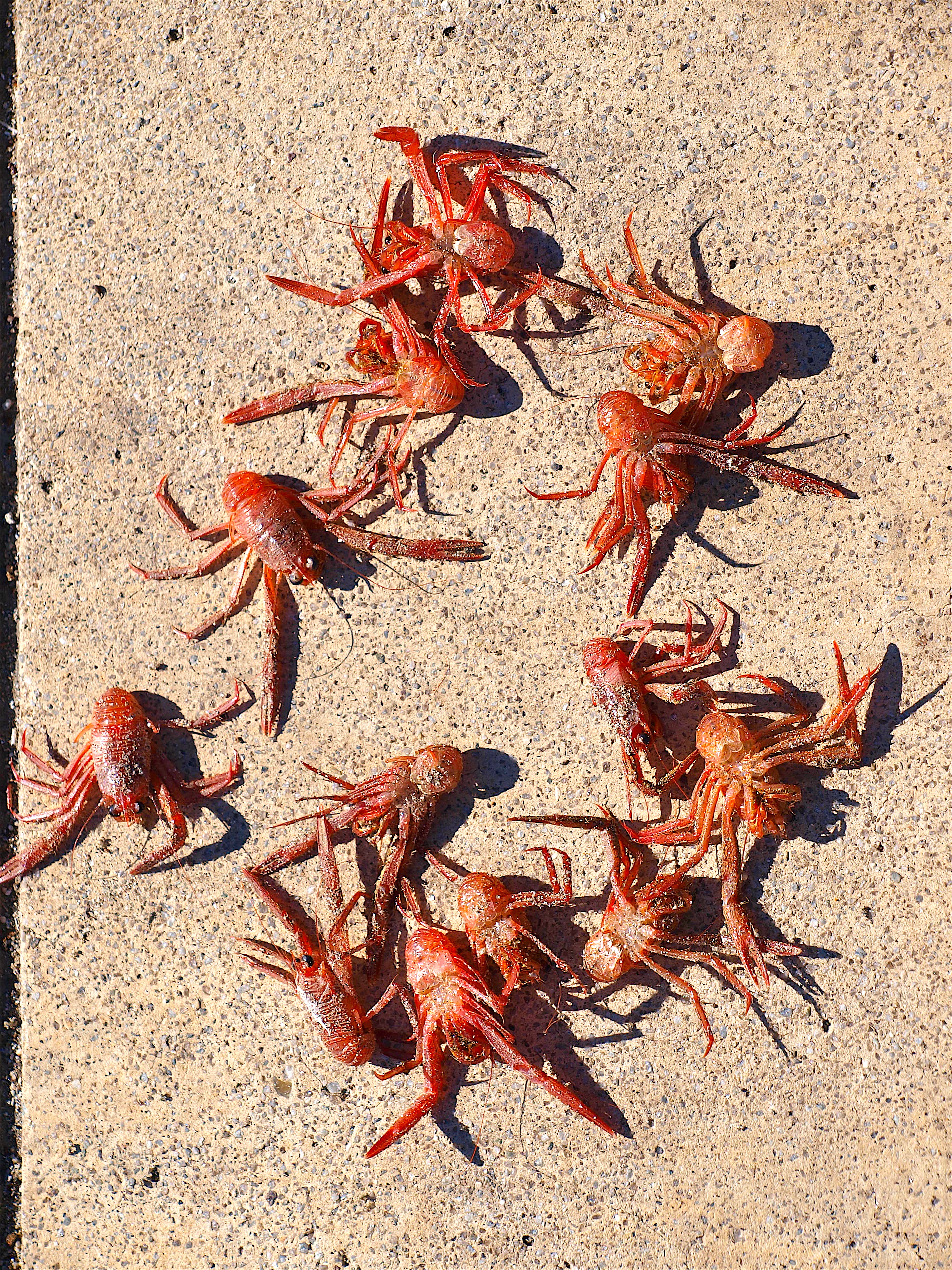 Bait and Tackle: No bait and tackle for them but they can be taken by hand and used for bait.

Food Value: Most that have tried them say they are not worth the effort (they're small, about 96% water, and, like ghost shrimp, resemble mush after freezing). Some scientists also caution against eating them since their primary diet of zooplankton can contain high amount of toxins.

Comments: An infrequent visitor that can cover a beach with literally thousands of crabs when washed ashore.
Last edited: Nov 19, 2018
M

#12
Looks like they'ed be alittle "krunchie" to chew, They're not the langastino I see advertized at the "fresh fish" market???

As a kid... During the El nino of 82... I'm pretty sure I tried them. Not much meat in the ones I ate... Best thing to do is season and fry em up real good and make them into a crispy shelfish snack. This going in the cooking section? Lol

You know they use pulped shrimp shells to make them shrimp stick snacks.
M