#1
A friend of mine and I visited Avalon yesterday fished at Cabrilo Mole from 7am to 8pm. I went to the same kindergarten with this friend of mine in Japan and our respective lives took both us in this south land independently. We have been great fishing pals since we chance-met each other 10 years ago.

We had a nice tide of 10 am high and 5pm low. Weather was strange shifting from bone chilly to balmy hot in a matter of seconds. Water temp appears lower than I imagined. Winds are normal Avalon winds but we had a good spell of no winds in early AM and late PM.

Lots of visitors for the Jazz festival, making a good cheerful gallery. We fish with quite a few anglers. Some opaleye hunters at both corners of the mole. And short-stint bonito/calico hunters and some bait fishers came and went. One guy who was doing hand-lining was landing good assortments including a keeper sculpin that I helped unhook. No bait fish visible in the day time. No smelts we saw.

As for us: we tossed metal jig hard whole day with some bait fishing when we get tired. Bonita action was sporadic but there. My friend hook-set 5 and landed 3. I have hook-set 8 farmed 2 and landed 5, reaching my limit. One of my landeds was 23 inch long, which gave me a nice fight. A local worker told me that there was a huge boil all over the area in front of the mole in the mid afternoon a day before. He was not fishing then but he was sure it was bonito. Yesterday, we did not see a single boil. We were lucky twice to have our jigs swimming when a school hit. Other than that, it was all sporadic thing once an hour.

When we put some baits, regular variety of fish at the mole showed up. I found millions little cailcos, baby sheephead, baby sculpin, and garibaldi. My friend landed a moray eel after dark and one sea urchin hooked itself on his squid bait, the first I ever seen sea urchin fished that way. 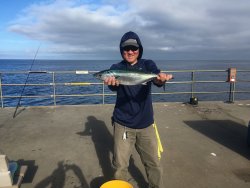 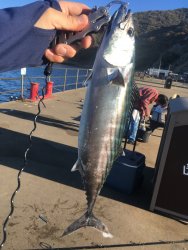 A nice bonito who gave me a nice fight. 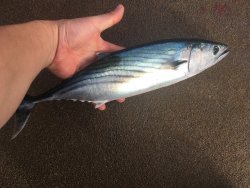 Another one in AM. 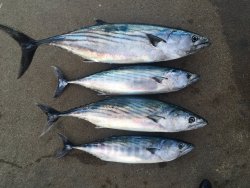 Four of the five got landed. 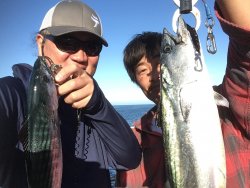 One of the two double hits when a school hit the mole. Great to see my friend's face grins big! 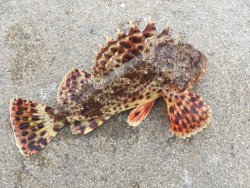 On my High Low rig with squid bait cast under the mole, this baby sculpin came up. 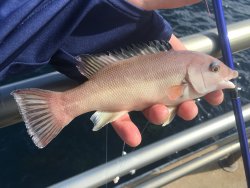 And this baby sheephead took the same bait offered in the same way. 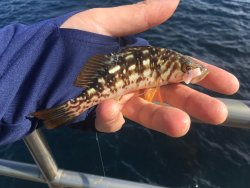 And baby calicos like this were there in millions. 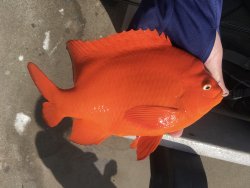 And a corn enticed this garibaldi. Galleries went to board the ferry always love to see these fish landed. I helped kids to touch it and release it back safely. 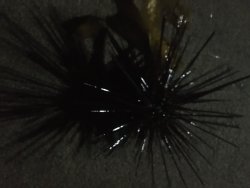 And sorry for bad photo quality but this is the sea urchin my friend landed on his hook with squid on. 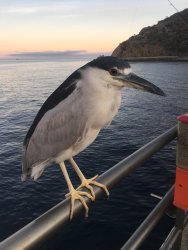 A very hungry bird ready to steal any fish/bait that we do not attend. The city of Avalon should pay him a handsome fee because tourists LOVE him. I am sure there are more than dozen instagram posts today showcasing this bird.... 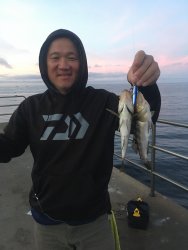 And my final cast of the day got hit by these two eager baby calicos. I knew something was hooked but could not tell what the heck was from my rod-feel. Funniest way to end my day of fishing! Thanks for reading.
M

#4
Awesome fishing. That large bonito is significantly bigger than the others. It must have been fun reeling that one in.

#5
MisterT said:
Awesome fishing. That large bonito is significantly bigger than the others. It must have been fun reeling that one in.
Click to expand...
Thank you! It was indeed fun to land it.
M

Thank you for your post. Gives me hope for my next trip. First of November.

Staff member
#8
Thanks for a nice report and congratulations on some good fishing! It's always nice when the big bonito make a showing.

#9
Ken Jones said:
Thanks for a nice report and congratulations on some good fishing! It's always nice when the big bonito make a showing.
Click to expand...
Thank you Ken!
M

#10
fish-ninja said:
Now all we have to do is to give a tackle so the Heron can fish halibut with his livebait....... Good luck for your Nov 1 outing! FN
Click to expand...
Correction....Black hooded (crowned) night heron. I left out the word "night" before.