Staff member
#1
Saw this bat ray caught by high schooler Josh Ling at the pier yesterday. A 37-inch mud marlin that gave him a good fight. Surprisingly, when he saw me wearing my Pier Fishing In California sweatshirt he said, "are you Ken Jones from Pier Fishing In California?" It turned out that he watches the site but hadn't signed up yet (but hopefully he will). That was the first time in a few years where a stranger at a pier came up and knew me by sight. I was most impressed by him and his friend. Both seemed articulate, good sportsmen (carefully releasing the mud marlin back into the water after the fight), and knowledgable. He had one plastic lunch container filled with leaders he had tied for the sharays (all excellent, first class leaders), and one plastic lunch container for his sinkers (he was using 5-ounce spider sinkers). I always love it when I see young anglers who are doing it right! 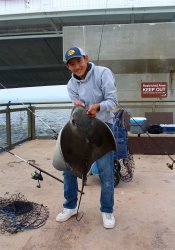