#1
Stayed at Avalon for two days and a night to do some fishing.

After getting off the ferry, I started off fishing the Mole with a 42 g green coltsniper, the first fish I caught was a greedy calico bass. I then hooked a much better fish (likely a bass), that took me into the kelp and broke me off. 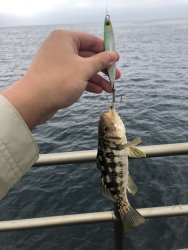 I put on a new blue and magenta coltsniper, and around 8:30 am, caught a decent sized bonito. After about an hour of no bites fishing only the jig, I switched to the splasher-fly rig and after a couple casts, had a missed strike. A couple casts later, I hooked and landed another bonito. A steady bonito bite continued until about 11:30, when the sun came out and I had limited out. 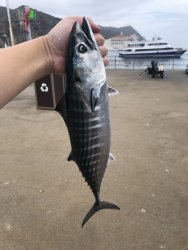 After two fishless hours, I moved to the GPP. Immediately I noticed there were no opaleye around the pilings, only the usual horde of short calico. After catching and releasing too many shorts, I headed to Seacrest Inn and checked in. After sleeping a bit, I went back out to the Mole at 6:30 pm and began fishing lures again. After a couple short strikes on the 42 gram, I switched to a 28 gram jig and immediately began hooking about a million short barracuda. This continued up until around 8:30, when it was completely dark. I fished the Mole until about 10, and after catching nothing, headed in.

I woke up at 5 am the next morning and headed down to the Mole. I started off with the 28 g coltsniper and around 6, caught my first of many more short barracuda, which were boiling on the micro bait huddled around the Mole. Around 9 am, the bait dispersed, as did the fish. I then saw a singular boil in the distance, and cast out to it. My jig was picked up almost immediately, and the fish went on a screaming run, nearly spooling me, then ran back to the pier, buried itself in the kelp and broke me off. Reflecting on it, I feel sick to my stomach; that could have been a yellowtail. I switched back to the 42 g coltsniper and continued to fish, catching two bones and a couple scattered short barracuda, before the wind picked up around 12, and I took a break. I started fishing again around 2pm, but this time for some of the larger baitfish I had seen around the pilings, I caught a couple smelt, which I dropped down by the pilings, and a swallow damsel. 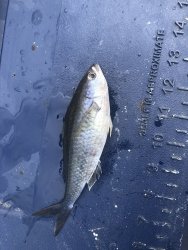 I didn't catch anything on live bait, but around 4 pm, the micro bait showed up close to the pier again, and I began fishing the 42 gram jig. At first the fish were sporadic, with only a couple cuda here and there, but at 5, the bite went off. I was again catching fish after fish, and after a while, I switched over to a krocodile to try and get a bigger fish on the larger profile lure. I quickly caught two legals, and got a lot of short bites. I lent out more of my jigs to some people fishing nearby, and they were able to catch some fish of their own. I took the 7:30 pm boat back home. 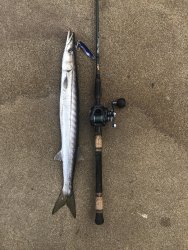 I think this picture of the 42 gram coltsniper best sums up the fishing over the past two days: 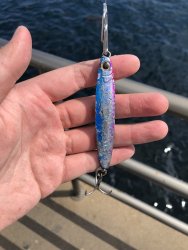 It was an interesting experience fishing predominantly with artificials, but it certainly paid off. 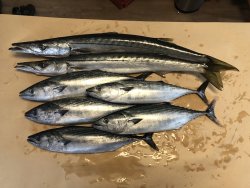 I will be there Next Wednesday.

#3
Thanks for sharing. I hope to go out there one day (most likely next year).

Despite lots of break offs you got a good amount of fish to take home. I'm glad you are having better experience with the coltsniper than I have. Mine is much for beat up from the jetties and I rather have it beat up from fish.

On the fish that nearly spooled you and got away were you not able to maneuver it with your rod? Just wondering whether it's a loss in that situation...

I will be there Next Wednesday.

Must remember steel leaders and large Krocodiles.
Click to expand...
I'll see if I can make it out there then, been trying to squeeze every last trip out of this summer before I go back to school.

MisterT said:
On the fish that nearly spooled you and got away were you not able to maneuver it with your rod? Just wondering whether it's a loss in that situation...
Click to expand...
Once the fish stopped running, I had set the drag lightly and tried not to put too much pressure on the fish since I the jig I was using had small hooks, and I was worried I would have bent them out. Thinking back on it, if I had put a little more pressure on it as it got close to the pier, I could have landed it. No use crying over spilled milk at this point, but this fish will probably haunt me for years.
M

#5
Well you always learn from this experience and be a better fisherman next time.
M

Staying up all night at the Mole and taking the 7:30 PM boat home on Thursday.

Anybody who wants to join me is welcomed.

The lost fish could be a bonito caught and picked up by a sea lion.

#7
I will probably be there Tuesday-Wednesday.
E

Thanks for the report!

Staff member
#9
Your loss of a fish reminds me of several fish I lost at the 2009 Get Together. On Saturday night, after the derby and dinner, I headed to the Green Pleasure Pier on a mission—to catch a flyiing fish (that we had seen the previous night). I figured a Sabiki baited with lugworms, and fished under a float, just might yield a flying fish (since they so closely resemble jacksmelt). I might have been right except that jack mackerel kept hitting the rigging (darn them!). I then decided to put a live jack mackerel on my heavier outfit and cast it out. I had a hard hit, struck hard—and missed the fish. I pulled in a mackerel devoid of much of its skin on both of its sides. Not sure what it was but the jack mackerel was a decent sized bait. Possibly a large calico, possibly a yellowtail, possibly a lot of things...

Sunday saw more lost fish. I had baited up my heavy pole with squid and cast out to the deeper waters while I fished my light pole by the pier. I managed to lose what had to be three fairly large big fish. The first was within ten minutes of baiting up when something hit my heavy pole, started to peel off line at a tremendous rate, and then saw the line go dead. When I reeled in it appeared the 30-pound braid had simply been cut in half. Never saw the fish but assume it was a big shark (big threshers, makos and blues are found in these waters). A half hour or so later another big fish hit the squid. This time the fish took the line but I was able to hook it and play it for about fifteen minutes before it tangled in something on the bottom and eventually managed to break free. The fight was that of a typical bat ray, a big one, but not as big as the bat ray that kept showing up in the crystal clear waters next to the GPP. That ray seemed at least six foot across (so probably was only five) but kept swimming around the pier for over an hour. I did try some squid by the pier but the ray ignored it. I did however manage to farm one more fish—on my light line. After baiting up some cut mackerel for some mac action, something simply inhaled my bait and took off on a steady journey headed out of the harbor. It wasn’t at a spectacular speed but just a steady speed that did not even slow as I tightened up the drag. As I neared the end of a spool of brand new 8-pound P Line, Halo line, I decided enough was enough and finally cranked it down and the line broke. If I have ever hooked a black sea bass this might have been the time but I don’t know what a large fish like that would have been doing grabbing my fairly small bait. Whatever it was though was big and strong and not a bat ray.
You must log in or register to reply here.
Share: Facebook Twitter Google+ Reddit Pinterest Tumblr WhatsApp Email Link