#1
I have midterms in a little over a week. Naturally, I decided to go fishing.

I took the 6:30 am ferry and immediately started fishing the Mole. I soaked a big chunk of mackerel on one rod while fishing a coltsniper on the other. I had two runs on bait, both of which I missed. There were boils well out of casting distance from the pier until about 10 am. I caught three chub mackerel but otherwise no action on the jig. Once I gave up on the lures, I fished strips of squid on a dropper loop for a couple small whitefish and a short sheephead. At one point I caught a 15" calico, but otherwise fishing was extremely slow. Somewhere in the mix, I caught a largemouth blenny. At 3 I moved to the GPP, and started fishing for opaleye. The short calico were back in plague proportions, and they beat most of the opaleye to the bait. I managed to catch two half-decent opaleye. Around 4 pm, large mixed schools of sardines and jack mackerel began swimming in front of the pier. I caught a couple, and moved back to the Mole by 6 pm. I caught nothing on fresh cut sardines, and went back home on the 7:30 ferry. 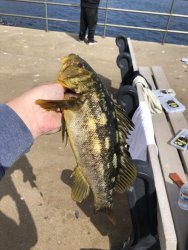 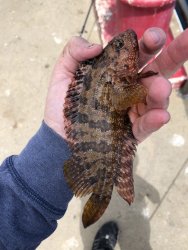 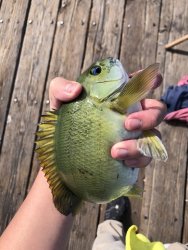 Staff member
#3
Interesting that the kelpies are moving back in.
M

#4
Thanks for the report.

Was the platform in front of GPP pier installed?

#5
Mahigeer said:
Thanks for the report.

Was the platform in front of GPP pier installed?
Click to expand...
It was not installed
E