A Trip To Catalina

Staff member
#1
A Trip to Catalina

For once I have little to report and have very few pictures. The plan was to travel to Avalon to make some new YouTube videos. The group would include myself and my wife Pat, my son Mike and his lady Quinn, and Rich the PFIC webmaster and person shooting the film. Given my son has been learning how to film and has produced a couple of short films I thought he and Rich would make a good team. Given that I have literally hundreds of pictures of Avalon and its fish, I pretty much left the camera work to others.

Friday night we planned to film Hashem hooping for lobsters from the Green Pleasure Pier while I would do some fishing. Hashem wasn’t too optimistic given the date but we hoped he might pull in at least a few bugs. He did not see a lobster but gave very good advice on how to hoop, the equipment needed, etc. I decided I would fish a heavier outfit for a possible sharay while I would target sculpin (scorpionfish) on my lighter equipment (since it was wintertime and we were fishing at night). I did not see a sharay but did manage two sculpin, neither very big. I did have two good strikes while fishing the “skipper’s corner” but both almost immediately were tangled on a rope or cable that wasn’t going to budge. I’m not sure what the fish were but expect they were decent-size bass.

Saturday was a day for the Cabrillo Mole. We arrived early at daybreak since Hashem was seeking bonito and they were reported to be making a morning bite. We found the waters around the Mole to be thickly covered with kelp making it almost impossible to make a long cast without tangling up but that didn’t stop Hashem. However, I do not think he had a single strike. I rigged up and tried casting with a sideways cast but found that even that method was painful for the shoulder (two torn tendons and one half torn tendon) and I decided my hope for a bonito was probably over until I get the operation. Another young angler did show up and was casting what looked like a MegaBait and did manage to hook a couple of bonito but both were lost in the kelp. 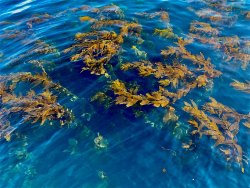 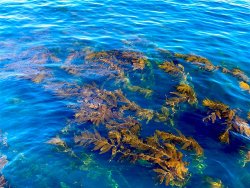 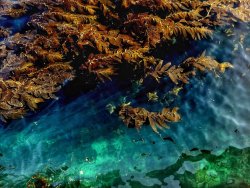 Meanwhile I was rigging equipment for our group and Rich was filming the sunrise. I finally got a chance to fish and as usual there were a lot of fish around but unfortunately most were smallish size.

We did decide to do a “newbie” segment with Mike’s lady who had never fished in saltwater or on a pier. She was quickly catching fish and with her enthusiasm I think we got some pretty good film. 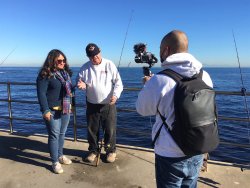 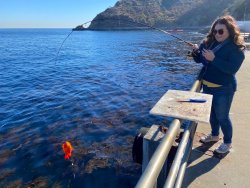 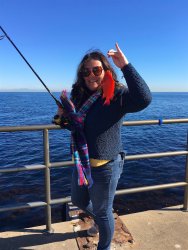 We (my son Mike, his lady and myself) were pretty much all catching fish which I think perplexed the others on the Mole who seemed to be mostly going fishless.

It was a fairly steady bite when I was actually fishing but between talking on film and helping out others I’m not sure I really fished all that much. My total for about three hours of actually fishing was only 37 fish, which if you know anything about Catalina, is pretty slow. There were no keepers although two of the bass were close to legal size and two of the sheephead were probably legal size. I didn’t plan to keep anything unless it was fairly big, more than just legal size.

Most of the fish were caught on market shrimp while strips of squid produced a few fish and lugworms produced fish bites and a few fish on every piece of worm. I had tried to find ghost shrimp and bloodworms but no one I called, from Seal Beach to San Diego, had either bait. I also tried some brand new bait. When I went to a nearby Asian market for shrimp I saw they had some live “blood clams” whose orange-colored flesh looked a lot like mussels. I decided to give them a try and sure enough got some good bites on the clams. And, of course, we tried some peas which also produced fish.

Overall a slow day although a lot of fish and the others seemed satisfied even if we didn’t catch anything big. We got some good (I think) film and managed to show the variety of fish at the Mole even though I wanted an opaleye. Unfortunately we did not see a single opaleye, even in the water areas that usually contain schools of hard fighting fish.

As for Avalon, the days were sunny, the nights cool, and the town was decorated up for Christmas and very pretty. Nice was that it wasn’t crowded as can happen during the summer months, especially on the weekends.

It was nice having my wife along for a change. I first visited Avalon on our honeymoon in 1966 (and first went fishing in Avalon the last morning of our honeymoon while Pat was asleep). When she woke up she wondered where I was. Then she saw I was out fishing—duh! Perhaps it wasn’t the greatest move on my part. We next visited in 1977 with my son Mike and daughter Kimberly, a visit that saw us take Mike to the clinic due to an infection in his ear. 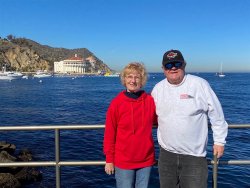 Twenty-two years later, in 2009, Pat accompanied me to our annual Catalina Get Together. She was not feeling well most of the time and when we returned to Fresno she wound up going to the hospital in an ambulance due to a suspected heart attack (that wasn’t a heart attack). 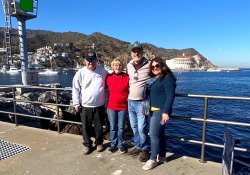 This time she felt great and had a good time. Unfortunately I didn’t have as much luck. In the afternoon I was talking to Rich while sitting on a bench when he said your pole is getting a big bite (the pole was actually off the ground about a foot even though it couldn’t go in the water). I started to run over to the pole and somehow tripped on my own feet (I guess) and took a hard tumble to the ground landing on my already hurt shoulder (of course), my side, and my head. Luckily the head is generally empty and hard to hurt. People helped me up and I was in real pain but what really hurt was my pride from taking a dumb fall like that. Duh! Hashem kept asking me questions to see if I might have a concussion but I was able to give my normal ridiculous, highfalutin answers so they knew I was all right mentally (to a point). Unfortunately my side and shoulder didn’t do as well. I think I ruined months of therapy since I can now barely raise my arm. And, I went in yesterday for x-rays on the ribs and am awaiting the results. After the fall I kept fishing but I leaned on the railing and kept my right arm on the railing for support whenever I needed to reel in a fish. I don’t think anyone noticed what I was doing or they probably would have raised a stink and wanted me to stop. But you don’t stop fishing for a little mishap like that.

As reported earlier, we headed out Sunday at noon and I got the chance to meet FishNinja. Hashem said he would be on the Mole casting for bonito and he was right. He and his buddy had a couple of very nice fish. 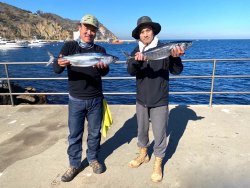 #2
Nice report. The pictures of the kelp are so alive.
I did notice you were not standing as usual after the fall, but did not want to advise you too much.
Not easy to leave the railing at the Mole.

Perhaps you can switch the reel handle to hold rod in your lefthand until after the surgery.

It was good to see the family. I hope the holidays goes better for all.

Whatever lure is used by FishNinja, seems to really attract bonito at the Mole. His visitor from Japan seems like an experienced fisherman too.

#4
Thanks Ken for the report. I never knew the kelp could get so thick!

#5
So glad that no broken anything. I did not know of the fall you took. When I asked you about your shoulder (Hashem told me about it earlier), you shrugged. Now I know what you meant.... Happy holidays to you and your beautiful family!
M

#6
I wanted Ken to mention it if he wanted.