August 28, 2021 saw the 32nd Annual “Kid’s Day on the Pier” at the Marin Rod & Gun Club pier on San Quentin Point in San Rafael, California. It was also the 8th co-sponsored by UPSAC (United Pier and Shore Anglers of California) and PFIC (Pier Fishing In California). 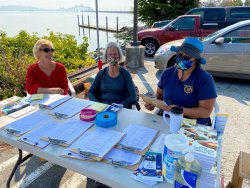 Registration — My wife Pat, Mary Ann, and Rita Magdamo (a member of PFIC for 17-18 years and one of the best anglers I know)​
The day would see 69 “official” participants in the age 6-15 event as well as about a dozen “unofficial,” ages 5 and under newbie anglers. When combined with the parents, friends, and workers, the crowd was close to 180 people, one of the largest in recent memory. Given the warm weather, low tide conditions, and somewhat “dirty” air, the large numbers were somewhat surprising to some. 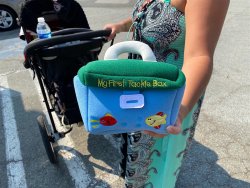 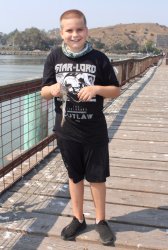 First fish of the day — baby leopard shark — Vincent DeJong
​
The Marin Rod and Gun Club and United Pier and Shore Anglers of California (UPSAC) brought free loaner tackle and people to help out at the event while the club provided the free bait. Assistance for the (often) newbie anglers was available as needed. 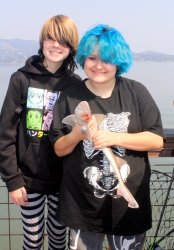 A brown smoothhound shark — Danika Wren​
Luckily, the fish gods cooperated and the youngsters caught both a good number and good variety of fish. The various species were led by the sharay contingent (sharks and rays) —22 leopard sharks, 11 bat rays (including one reported at approximately 70 pounds), and 5 brown smoothhound sharks. Rounding out the action were 13 jacksmelt, 2 California halibut, 1 sardine and 1 crab. The action resulted in a lot of happy, smiling faces and excitement when large fish were hooked. 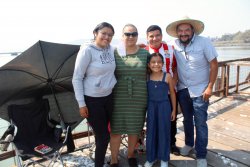 I love the smiles!​
One notable moment occurred when a large bat ray had been hooked but was tangled on a piling. The fish was visible to the crowd of youth looking straight down through the cracks between the surface boards, which prompted the memorable shout—“Oh my God, a humongous fungus!” Not exactly a correct scientific term but it got the point across that it was something big. 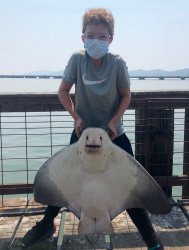 Bat Ray (Mud Marlin) — Adam Gorczycki​
Once the fishing was completed, every youngster received a free hot dog lunch courtesy of the club, and new rods and reels from the club and UPSAC. 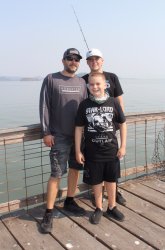 The DeJong family​
In addition, each individual age group winner received a 1st Place trophy, an autographed copy of Pier Fishing in California by Ken Jones, and a rod and reel. 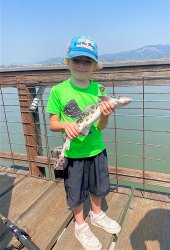 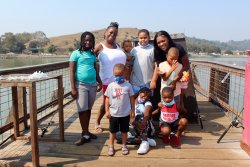 Another happy family!​
Spearheading the efforts of the Marin Rod and Gun Club this year was Al Petrocelli assisted by many, many members of the club who performed a plethora of duties—serving as judges on the pier, cleaning and fixing rods and reels for the derby, cooking the hot dog lunches, and setting up and cleaning the auditorium and kitchen. A special thanks to Ann Maria who helped with the registration of participants. 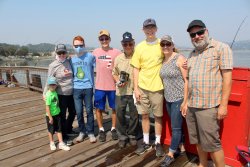 The biggest thanks of course goes to the Marin Rod and Gun Club that has sponsored this event for 32 years but all of the various organizations and volunteers deserve a round of applause.


A full report with all 70+ pictures should be posted by tomorrow on kenjonesfishing.com

#2
Thanks for the post, did not recognized Rita.
M