Staff member
#1
Hans (Sofa King) sent me this picture of a fish caught by Frank L. It appears to be a misformed bat ray or perhaps it was mutilated at some point? I sent a note to Milton Love at UCSB asking if he had any ideas. Below is a normal bat ray and also a picture of an angel shark (which some thought it was). 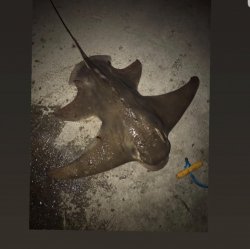 Below, a normal bat ray that I caught one day in Oakland. 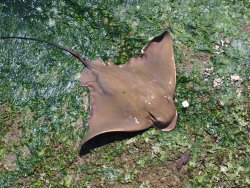 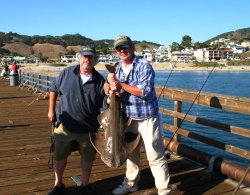 #2
Ken I saw that a few days ago when it was caught. Can’t wait to hear the feedback you get from your inquiry.
M

#3
Looks like two embryos combined into one. Conjoined twins. Too perfect of symmetry to be mutilated.
M

#4
Underside photo of the same ray.

Staff member
#5
Feedback from Dr. Love indicates it's a mystery. He did say, "the symmetric nature kind of says genetic abnormality."

#6
I bet it has extra vertebrae. Would be interesting to see an X-ray.

Staff member
#7
It's hard to say what would show up in an x-ray. Sharks and rays do not have a typical bone skeleton but have cartilage instead of bone. It's why they are placed in a separate class, Chondrichthyes (cartilaginous fish), instead of being placed in the class Osteichthyes (bony fish).

#8
One potential argument against it being a mutation is the lack of a free trailing edge, which I would expect to have formed if there was indeed some kind of duplication mutation or a parasitic twin. The torso does seem longer in proportion to the head than in a normal bat ray. An x-ray would still likely show any changes to the internal skeleton, since a neoselachian (the larger clade containing sharks and rays) synapomorphy (derived trait) is calcified vertebral centra.

#9
I'm guessing the fish only put up half the fight...

#10
So what happened to the fish? Was it returned to the water?
M

#11
The Happy Wanderer said:
So what happened to the fish? Was it returned to the water?
Click to expand...
Released as far as I have heard.