#1
I took a friend up to Goleta Pier, hoping for some lobster before the end of the season (March 20). The water was pretty murky from the recent rains. Due to miscommunication and poor planning, the only bait we had was a couple of jack mackerel. She caught one small crab. I think it was a swimming crab, Portunus xantusii, identified by the long lateral spines on the carapace, and the paddle-like rear legs.

The last time we were there, she caught a squid on a baited sabiki, so I tried a squid jig, but had no luck, then left it lying on the pier at the end of the night (more poor communication). There was an 2-3 ft eel like fish that hung around the area for a while. It would slowly come to the surface, swim around, then descend. I flylined some bait close to it, but it seemed oblivious to both the splash and the bait. Later it swam right past my baited hooks, almost touching them. Courious about what it was, we tried holding the crab net just below the surface, hoping it would swim over, but after that it disappeared. It probably would have slipped right through the net mesh anyway.

Later in the evening, since there was nobody else around, I switched to overhead casting, to get close to the pipe. I kept my line tight enough that I could feel the bottom. My weight would momentarily catch at times, but always work free, except when a fish was involved. If i didn't act quickly after a bite, my line would get snagged. In one case, after fighting the snag for 10+ min, occasionally giving the fish a chance to pull back, hoping it might help me, the leader broke at the top knot. In another, the sinker broke off, and I brought in a <6 in brown rockfish (a lot of work for a very small fish that went back). Any advice would be welcome.

Staff member
#2
It can be hard to fish in the rocks as you were doing on the pipe reef. A couple of ideas: (1) use a single dropper leader and one hook instead of a high/low (so that if you hook a fish the other hook doesn't hang up on the kelp or rocks, (2) use a lighter line for connecting the sinker to the main line (hopefully that line will break if the sinker snags on the bottom allowing you to still bring in the fish).
S

I dislike leaving lead in the environment, but it is worse to leave a fish on a weighted leader. My dad used to talk about using Bull Durham bags of sand, but I don't know where to get anything like that these days, and it seems like they would be more prone to snagging. I saw some steel sinkers the other day. Has anyone tried them?

#4
Spark plug sinker! Free, steel, and heavy enough at about 1.5 ounces. Just hammer down the piece of metal where the spark is supposed to meet the core bits. No less likely to snag than a torpedo, but still cheaper. Drops down a bit slower though, not sure if it holds a bit worse.
If talking about sand bags, would a compost able produce bag work? Seems if you knot the end of a small section it may work for what you want. After ca banned plastic bags for shops, these are the norm everywhere now, so getting them won’t be a hassle.
C

#5
Reel Newbie said:
Spark plug sinker! Free, steel, and heavy enough at about 1.5 ounces. Just hammer down the piece of metal where the spark is supposed to meet the core bits. No less likely to snag than a torpedo, but still cheaper. Drops down a bit slower though, not sure if it holds a bit worse.
If talking about sand bags, would a compost able produce bag work? Seems if you knot the end of a small section it may work for what you want. After ca banned plastic bags for shops, these are the norm everywhere now, so getting them won’t be a hassle.
Click to expand...
Where do you get free spark plugs from?

#6
Ask a Mechanic, most will give you used ones after you bring your car in.

#7
I can’t really see how spark plugs would introduce much pollution at all once you de grease them with a little paint thinner. They go into the landfills anyways, and no one wants them either, so why not? I doubt that a bit of steel and ceramic rusting away on the ocean floor is any less eco friendly than a lead sinker.
M

#8
There are tungsten sinkers too. Not as heavy though.

#10
Goleta pier, in particular, is rather sheltered most of the time from strong currents, longshore drift, and pounding surf; therefore, you can get away with lighter weight than at other "exposed" piers along the coast. When we were kids fishing the rocks around the old Marineland in Palos Verdes, we used what we called "rock weights"-- no, it's not a trick name. Quite simply, an old cotton shirt was cut into squares of fabric large enough to hold a small cobblestone from the beach, and then threaded onto a large snap swivel. If we were feeling particularly chuffed, we stuffed a few anchovy heads in the wrapping to provide a mini chum slick, but I doubt it made much difference. At worst, you would lose the swivel and the small piece of cotton fabric, but no lead, no spark plugs, no plastic. Most times the relatively less-dense rock with fabric drag would plane towards the surface on the retrieve, which avoided snags much better than lead weights. Holding your rod tip higher and winding like hell on the retrieve didn't hurt, either.

As for the original poster, probably no need to overhand cast to fish the pipe... an underhand shot gives you the right distance. In fact, one of the tricks to fishing the pipe successfully for those cute SBRF is to lay up your bait NEXT to the reef, not on top of it. Practice and pay attention to where you splash, and where you get snagged, use your mind's eye to picture where your bait and rig are on the bottom, and you'll find the sweet spot. Plus, you'll get more bites next to the reef than on top of it, guaranteed. Here's an old picture from Pierhead's site (still up... should be archived for posterity): 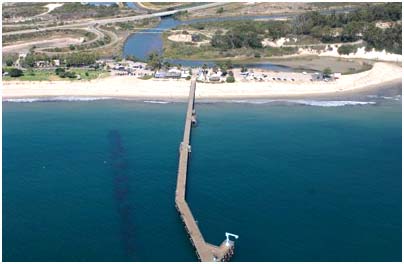 #11
Spark-plugs? Contamination? Maybe if you could get some spark-plugs out of those 12 cylinder radial engines from WW-2 B17 Bombers (they have an ounce of Gold each) ((gold is the best electric conductor for a sure ignition, nothing but the best for our Boy's)) at least it would help "my" environment?!!! Back in the day you could buy tobacco sacks, they didn't work all that well for me, I found that if you used the outer sheath of 3/16th para-cord, melt one end closed, fill it with BB's (as heavy as you need) close the open end with a snap-swivel, and it works GREAT! I think someone called it a slinkie??? (old board) it wiggles around the rocks and don't get stuck much.
Last edited: Mar 8, 2019
You must log in or register to reply here.
Share: Facebook Twitter Google+ Reddit Pinterest Tumblr WhatsApp Email Link