“Bah’ Humbug.” That was the name of the impressive-looking yacht anchored just down the shoreline from this pier on my first visit. It sort of reflects the local attitude about this pier since it receives little use and is generally considered to offer little in the way of fishing. And, for the most part, those attitudes may be correct. You’ve got to have a little luck here if you’re going to catch quality fish since the environment is more conducive to the smaller fry. Nevertheless, sometimes the big fish do show up and can be caught. This is also an interesting area and one that offers a nearby facility that most anglers, especially children, should visit. 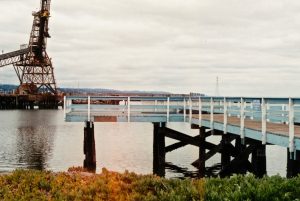 Environment. The wooden pier is small, only 30 feet long by 15 feet wide, but seems in good shape even though built back in the ‘60s. Anglers are faced with a fairly shallow and at times brackish situation here since the pier, the marina, and the Port of Redwood City are all located in the main channel of Redwood Creek. Still, dredging is carried out to keep the waters in the port deep enough for large ships and this may attract some fish. During the summer and fall months the water is salty (in fact, nearly matching the 3.1 per cent salt content found in water by the Golden Gate); during the winter and spring it is more fresh in nature due to the greater runoff from the creek. Pilings are covered with barnacles (but no mussels), the bottom appears to be mostly mud with little vegetation, and the inshore area has rip-rap rocks along the shore. To the left of the pier sits a small dock that prevents fishing in that area although the channel between the dock and pier is fishable. The right side of the pier is connected, by way of a walkway and a locked gate, to the private Redwood City Sailing Center so once again the fishing is restricted on the side. Most anglers fish straight out from the pier.

The fish that you will most likely encounter, especially if you’re fishing on the bottom during the summer and fall months are bullheads (staghorn sculpin), shiners (shinerperch), and small brown smoothhound sharks. Occasionally schools of topsmelt and jacksmelt may swing by the pier and if you’re fishing near the surface you may be able to fill a bucket with the good little fighters. During the summer and fall months, generally in the evening, a few striped bass may also show up and they can reach pretty impressive size. Although additional species of perch may show up in the winter and spring, it depends to a degree on the amount of rainfall. During heavy-rainfall years the water in the port can be pretty much like a freshwater lake and marine species will move further out into the bay. If it is a low-rainfall year, species like pileperch and blackperch may visit the area, and flatfish like starry flounder and sanddabs may make an appearance. Sturgeon are in these waters every year and some should swim into the port area but very few anglers will be trying for them at the pier. Stripers also will be present every year and more fishermen should try fishing for them here.

Fishing Tips. As mentioned, it’s good to have a little luck on your side but that’s true in most cases of fishing. The key is to be prepared for what’s available. During most of the year pile worms would be a bait of choice here. In the winter and spring try them on the bottom for flatfish and perch; for almost any time of the year try them just under the surface of the water for smelt. Even if you are primarily fishing on the bottom, devote at least a little time on the top for the scrappy jacksmelt. During the late spring to fall months, use cut squid, or a smelly fish like mackerel, to entice brown smoothhound sharks, a few leopard sharks, and bat rays to your hook. Don’t forget that the bat rays can often exceed 100 pounds in size so be prepared with a plan as to how you will land them (do I hear net). 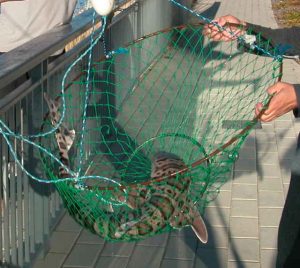 If you want to try for sturgeon, and, as they say, hope springs eternal, bring along a sliding leader and some grass shrimp, ghost shrimp or blue mud shrimp during the winter and spring months. You never know when a diamondback might show up even though your chances are not very high.

The same might be said for striped bass although they offer a more realistic hope. Stripers should be in these waters from about May until September or October but peak months will be July and August. Most of the stripers will hit baits on the bottom—pile worms, anchovies, sardines, live bullheads, and live mudsuckers. Since this pier is close to the water anglers should also try lures for the stripers—spoons like Kastmasters and Krocodiles, Hair Raisers, and a variety of plugs.

For the youngest anglers, ones content to catch a small shinerperch or bullhead, simply put a few (no more than three) small size 8 hooks on your line and bait each hook with a small piece of pile worm. Fish down toward the bottom or mid-depth for the shiners, cast out and fish on the bottom for the bullheads. Adults seeking the same species for bait can, of course, try the same thing.

<*}}}}}}}}}>< — Fish surveys conducted by the California Department of Fish and Game between 2004 to 2009 showed a limited number of species of fish at the pier. Listed numerically they would be jacksmelt (by far), shinerperch, staghorn sculpin, leopard shark and topsmelt.

I’m one of your avid fan and faithful member of your board. I’ve been fishing this spot for 2 years now and love the peace and serenity this place offers. Fishing has started to pick up the last couple of weeks. It has been consistent leopard shark (between 18 in to 40+ in), smoothound and bat ray (biggest so far was a 32 in wingspan) with whole frozen bullhead and strips of squid on sliding rig as the main offerings.

<*}}}}}}}}}>< — I’m always interesting in the areas around the piers and this area is no exception. If you look straight ahead and off to the left from the pier you’ll see some large mechanical loaders on the other side of Redwood Creek; these are used to load salt for Cargill Salt (formerly Leslie Salt), and sometimes there are pretty impressive mounds (or mountains) of the bitter stuff. Opposite the pier, and slightly to the right, sits Bair Island (and the outer island is shared with the San Francisco Bay National Wildlife Refuge). To the right of the pier, down the shoreline, are a series of wharves and sometimes large ships loading and unloading everything from scrap metal to concrete. One wharf also serves as a home base for the Yorktown Clipper, a 257-foot-long, 138-passenger cruise ship that offers October and November trips to “The Inland Waterways of Northern California.” The ship’s passengers travel through the bay to San Francisco, Sausalito and on into the Carquinez Strait, the Delta and Sacramento. To the left of the parking lot is the Spinnaker Sailing School and to its left is the main marina area, slips for approximately 200 craft, and the Sequoia Yacht Club. Out of sight from the pier, but just past the tip of the land that makes up the port, is located Westport Slough, and on the other side of that water sits Greco Island.

Plans have been approved to make the port a base for a new Ferry Terminal that will provide ferry service throughout the Bay Area (although it will not happen until the early years of the 21st Century). In addition, a multi-million dollar, 106-acre high tech business and bayside recreation center called the Pacific Shores Center has been approved for the point out past the main port area.

<*}}}}}}}}}>< — A nearby site that should be visited and supported by anglers is the Marine Science Institute. The institute, founded in 1970, offers hands-on learning for students of all ages. For schools, the institute offers tours on the bay in the institute’s 90-foot-long research vessel—the Robert G. Brownlee. Once aboard, students use research equipment to collect plankton, water samples, and conduct hydrology tests. Students also net several species of fish. Shoreside, a number of different activities are also offered including ocean labs and activities geared to the age level of the students. Although primarily a working institute, and especially busy during the summer when kids are present nearly every day, the good folks at the institute seem willing to let visitors take a look at the tanks of fish and various other organisms. Most interesting to me was the tank holding the dozen or so small leopard sharks and one cute and friendly little 7-gill shark. For information you can call them at 650-364-2760 or visit their website at www.sfbaymsi.org. To reach the facility, turn north from Seaport Blvd. onto Chesapeake Drive and follow the signs to the institute.

History Note. As one of only four deep-water ports on San Francisco Bay (in addition to San Francisco, Oakland and Richmond), and the only one in the South Bay, Redwood City has a long tradition of shipping and wharves. This area was part of the Rancho de las Pulgas (the fleas) grant given to Don José Darío Argüello in 1795. The grant stretched from San Mateo Creek on the north to San Francisquito Creek on the south. Redwood Creek ran through Rancho de las Pulgas into a slough of the bay and provided a natural point for shipping. In time, the point acquired the Spanish name Embarcadero de las Pulgas.

In 1850, after the coming of the Americans, the Embarcadero became an important lumber port. Mills in Woodside and Searsville sent a steady supply of redwood lumber from the groves of the nearby mountains, and the port’s wharves were stacked with wood destined for San Francisco, Oakland and Sacramento. By the 1860s several businesses had been started near the port, most associated with shipping or the transportation needed to bring goods to and from the port. Most famous was probably the McLeod Co. that built oceangoing schooners averaging over a 100 feet in length. Others included such occupations as wagonmaking and blacksmithing. Around this early economic activity would develop the town of Redwood City. An interesting picture from 1878 shows the now Americanized “Redwood Embarcadero” and its waterway full of ships, sailboats and rowboats.

By the mid-1950s the port’s main products had changed from lumber to cement (Henry Kaiser’s Permanente Cement) and salt (Leslie Salt), and the nearby redwood groves had largely either been cut down or turned into state parks. The creek itself, onetime center of the town, now rests underground for much of its length.

Hours: Open 24 hours but there is no light on the pier.

Facilities: The pier itself, and one bench, are all you have. Public phone and restrooms are located near the Harbormaster’s Office. Behind the pier sits the upscale Arrivederci Italian Seafood Restaurant. I guess if a pier angler were starving, he or she might be able to get some take-out food from the restaurant.

Handicapped Facilities: None really. The surface is wood planking and the railing is approximately 42 inches high.

How To Get There: Leave US 101 (Bayshore Freeway) at the Seaport Blvd. exit (also marked Port of Redwood City and Redwood City Marina) and drive east until you see Seaport Court. Turn left and go to the back of the parking lot behind the buildings.